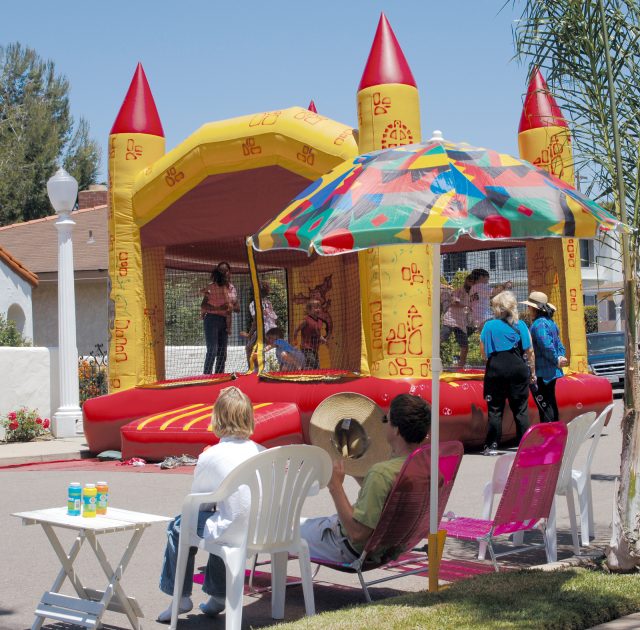 On the day of the block parties, I woke up praying for a downpour that might wash out the warring parties. But as I opened my eyes, I saw the sun breaking from behind the storm clouds. And then I heard trucks rumbling down the street, followed by the pneumatic heaving of air compression machines.

I walked onto our front porch. Two bouncy castles were being inflated on the street: one a bulwark at the end of our block, and the other rising ominously at the head of the neighboring block. The fortresses were in place, and the troops were beginning to organize on their respective blocks.

My spouse and I have owned a house on our block for over three years and we don’t know the names of any of our neighbors. We both were raised in towns where neighbors were like extended family. As a kid you could pop in and out of neighborhood houses at will, and your parents knew the adults on the block so well that they could gossip for hours about their sexual peccadillos.

When we first learned of the block party, we were looking forward to it as a way to get to know our neighbors. But as the drama over the warring block parties escalated—something I normally would enjoy—I found myself growing disengaged. There was a time when I was younger that I would have happily waded into the conflict. I would have played kingmaker, working impishly behind the scenes to elevate one of the competing party organizers.

“I think I’m getting old,” I told my spouse, who had joined me on the front porch to watch as party organizers on our sister block arranged food tables and stared daggers at the organizers on our block. “I’m not enjoying any of this.”

Most of our neighbors are a decade younger than us, and the animus between the two blocks seems largely rooted in parenting turf battles. We feel both superior and rejected for not being dragged into the infighting. “Just be happy that we’re more mature than the rest of them,” my spouse said.

Immediately after she spoke, a dark cloud appeared in the form of the antisocial lesbians who live next door. We have been locked in a quiet melodrama with these nuts since we bought our place. They refuse to acknowledge us when we say hello, and we suspect that they stole the fairy lights in our backyard because the light was penetrating the blackout curtains covering their windows.

“It’s the Sisters Grimm,” I whispered to my spouse as the women lumbered toward us.

“Heard you got in trouble for donating to the other block’s bouncy castle,” the bigger of the two said by way of introduction. “We did, too.”

“We don’t have kids. We don’t understand the politics of block parties,” the other said. “Now everyone on both blocks hates us.”

“Well, I guess there’s only one thing to do,” said the bigger one. “We paid for them. So let’s storm the castles.”

And with that, peace came to the 1300 and 1400 blocks of Seward Street as the warring factions of suburban parents were united by their collective outrage at watching four middle-aged lesbians jump with abandon in their bouncy castles.