Success From All Walks Of Life 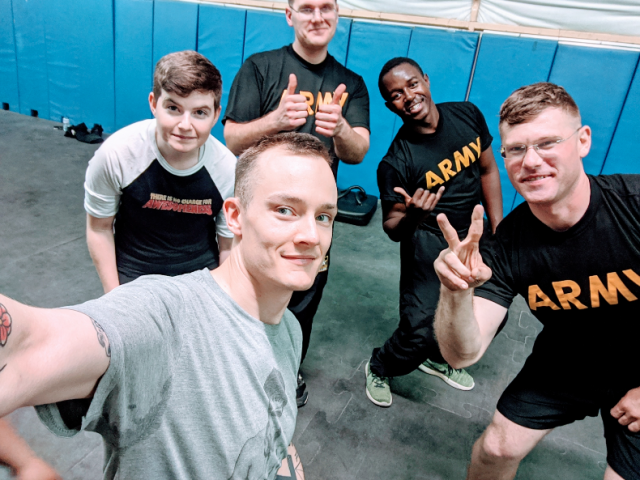 When discussing their coming out story, 1st Lt. Trevor Foster admits that the story’s had its highs and lows, not to mention being a considerably long process. Right now, Foster says they’re on “Coming Out Experience Number Three.”

“When I was in high school, I knew how I saw myself and was pretty open and engaged with the community of like-minded kids,” said Foster. “I was out. For the time, we were actually able to gain pretty good momentum [and] have some pretty awesome conversations with the school district representatives—it was a cool feeling. That feeling didn’t last very long because it didn’t change how awful going to school was, how often we got bullied, and how all those feelings of inferiority were validated at home. I was told it was ‘just a phase’ and it killed me inside. Although still effectively ‘out,’ I felt defeated and exhausted by the experience.”

When Foster entered college, they said that they had an opportunity to begin navigating their identity, which became “Coming Out Experience Number Two.”

“This experience was short-lived, because it was followed pretty quickly by an enlistment under the standards of ‘Don’t Ask, Don’t Tell’ (DADT),” they said.

Foster had joined the Minnesota National Guard in the summer of 2010, though they said that nothing in particular had prompted the decision.

“My life is a strange combination of deliberate goal-setting/planning, and whimsical fancy,” said Foster. “At the time, I had no reference point for the military in my life aside from the cool stories my grandparents would tell of their service in WWII. One day I just found myself in a recruiter’s office out of sheer curiosity, and two weeks later I was cutting off my mohawk and signing a contract of service. There has not been a moment since that I regret that decision.”

Foster—who grew up in the East Metro of the Twin Cities before moving to Minneapolis and eventually earning a Bachelor’s in Science at the University of Minnesota in 2014—is currently a 1st Lieutenant and the “S2” primary staff member for the 834th Aviation Support Battalion.

“In clearer English, that means that I am the subject-matter-expert and advise our commanders on all things related to intelligence, security, force protection and emergency management,” said Foster. “With a small team of analysts I provide all leaders and soldiers within our ranks; information and analytics, management of and oversight for 13 military security and emergency management programs (‘additional duties’), and the content/delivery of annual refresher and awareness trainings.”

Foster is currently deployed overseas in support of Operations Inherent Resolve and Spartan Shield, which is Foster’s first overseas deployment. Not too long after initially enlisting, “Don’t Ask, Don’t Tell” was officially repealed, which brought about, in Foster’s words, “Coming Out Experience Two and a Half.”

“At this point I am able to be a little more honest about who I am, but navigating that while balancing being a young person exploring their leadership styles is hard,” they said. “I’ve been in leadership positions in the military since 2014, and have always struggled with what relevance my identity has on what I bring to the organization professionally. At this point, I’m open about everything in every area of my life but there never really seemed to be much of an overlap into my professional career so I’m still stuck feeling somewhere in the closet.”

After the ban of transgender people in the military was partially lifted in 2016, Foster said they were able to more comfortably navigate life as a non-binary individual. That same year, Foster got married, was commissioned as an officer, and began law school.

“Between the stressors of life, and the recurrent theme at home that my ex-wife’s struggles were always more important and real than my own; my identity kinda got put on hold,” said Foster. “It wasn’t until all of the talk in 2018 about how gender identity was ‘an immutable biological trait identifiable by or before birth’ in Washington that I really felt personally compelled and obligated to proactively come out.”

Foster stated that all of their past experiences were largely passive in nature, but felt compelled to force themselves to be louder and prouder about who they were.

“Changing my email signatures to include ‘they/them’ was the first step, and eventually that blossomed into its relevance in other areas of my life,” said Foster. “Navigating who I am within the military, a hugely binary and gender-constrained environment, is still a work in progress. I like to follow rules, I’m a ‘lawful good’ to the heart. Every time I do something that might seem benign like painting my toenails or whatever, I get worried about it affecting my career. Hopefully telling my story here will make other soldiers feel more comfortable outside the binary, and perhaps open a dialogue about our place within the ranks.”

Foster said that the first people they related to about their identity in the Minnesota National Guard was their chaplains and sergeant major.

“Their reception was equally wonderful in its validation and frustrating,” said Foster. “To them, and the majority of the soldiers above, below and peer to me value me largely for what I add to the unit, and my identity is immaterial. In that sense, they have all been extremely supportive.”

“On the other hand, to put it in words I can’t do justice: ‘Good luck convincing a bunch of 60-year-old white dudes to use the right pronouns, just tell them you’re bisexual and they’ll get it,'” Foster continued. “I come back to this conversation, because its become pretty true. Both inside and outside of the military.”

Luckily, Foster has been able to overcome these obstacles when they had a heart-to-heart with soldiers in their section prior to deployment.

“It was sometime after we had an annual sexual harassment prevention briefing, and I wanted to ensure that they felt comfortable coming to me with any concerns or discomforts that they had then or in the future,” said Foster. “So I laid it all out there; and they were all onboard. They don’t even call me ‘sir’ anymore, they just call me ‘LT,’ since that’s the creative workaround we came to. I am fully confident that the analysts in my section represent the wonderful diversity that is the future of our workforce—also they’re the best damn teammates I’ve ever had.”

Foster asserted that across the board, the military is a superb environment because people from all walks of life are able to succeed.

“All the [LGBTQ] stuff aside, I’m a bit of a poster child for that: I don’t think there’s a person I’ve served with who would be opposed to the adjectives ‘weird,’ or colossal ‘pain-in-the-ass’ in describing me,” they said. “For some reason though, my supervisors continue to recognize my achievements.”

“However, the conversations surrounding openly-serving trans service members (or those of us that identify as non-binary) are wholly absent from the dialogue of inclusion,” Foster added. “The heated rhetoric on the news and in the courts has not helped that cause much.”

While Foster may still be in the third phase of their coming out story, they know for a fact that serving their country has been an honor and a privilege.

“I cannot articulate well enough how beneficial and how much personal growth you will get through military service,” they said. “It’s not always easy, but neither is civilian life. We are all growing together as a society in relation to diversity and inclusion.”