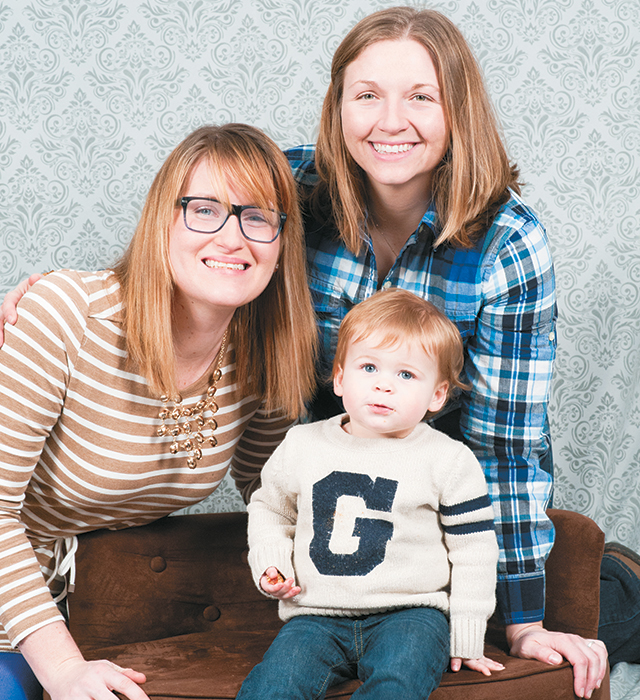 With statistics that say something like a kajillion people are meeting their match via online dating, it’s no wonder that Austin Calhoun and Kate Nelson did the same.

Thanks to OkCupid’s format, Austin could see that Kate had viewed her profile a couple times. Interestingly enough, Kate didn’t act because she thought Austin was too short (laughable, since Austin is six inches taller).

But some profile viewing obviously worked for Kate, as it lead to a first date. “I almost scared her off by using too many ‘air quotations’ and being kind of a nerd,” Austin says, while using air quotations. “My enthusiasm for sports won her over in the end, and she says she knew she really liked me when I yelled at the TV during a football game.”

That was 2009. Cut to a few years later and Austin is preparing to propose. She had been in the process of designing rings with the help of Continental Diamond for nearly three months. In a manner that is worthy of an viral proposal video online, Austin made a video for Kate, listing all of the ways Kate made her life better and why she loved her.

“Austin surprised me after work with champagne and a very personal video montage of our life together at the end of the video she proposed to me,” Kate says. “Our wedding was everything we could have asked for. It was in the country, in a barn, near a lake with a hobby farm on site. We had an outdoor ceremony filled with all of the people we love in the whole world. There was a bonfire, that we never made it to, lots of dancing, and a beautiful starry night. Our vision was captured perfectly on our wedding day.”

Those rings that Austin designed? Each ring has a stone from Austin’s grandmother’s own ring, but in a modern setting. “I think our wedding also following that theme — there were elements of the traditional wedding, but there were also some fun twists,” Austin says.

Their big day was August 25, 2012 and is described as “a great party” by Austin, complete with donuts and lots of craft beer. Those with a memory for dates will recognize that the ceremony was held nearly a year before same-sex marriage was legally recognized in Minnesota.

To address the topic that was on so many minds and hearts, the couple’s wedding website featured an FAQ that gave friends and family an overview about why marriage was important to them and to other Minnesotans. “We used our wedding as a platform to talk to our friends and family about the amendment,” Kate says, referencing the amendment that would have banned same-sex marriage in the state. The couple even worked some “Vote No” signage into their wedding photos. “Our officiant made a statement at the start of our ceremony. We are both very open about our life together and our family and have been for most of our adult lives. Being so open has made it easier for us to talk to people about our family.”

So, now that marriage equality has passed, what are two girls to do? Have a legal ceremony too, of course! Almost a year later, on August 1, 2013, Austin and Kate once again said their “I Dos”, this time under legal recognition.

Austin laughs, “Kate was overdue with Grady, so our friends joked that it was our shotgun wedding.”

Grady Nelson Calhoun, their son, was, believe it or not, a surprise (albeit, a welcomed one).

“After we went on our honeymoon in August 2012, we knew we wanted to start our family and we didn’t know how long it would take for Kate to get pregnant,” Austin says. “That was our first surprise, because Kate got pregnant [via artificial insemination] immediately and Grady was born August 5, 2013 after over 50 hours of labor to two exhausted but legally married moms. It was pretty amazing that he waited until after we were married to be born and incredibly special to see my name on the birth certificate from the start.”

Nearing a year-and-a-half, Grady has developed a unique personality and sense of humor. He likes to give “Cheers” with his sippy cup or bottle and he likes to give the dog (named Pig) hugs. He loves sports already, particularly soccer and football. Austin says, affectionately, that he is equal parts crazy toddler and cute cuddler.

“He is by far the funniest person in our household,” Kate shares. “He is a super helper; he always wants to help clean up. He is full of stories and babbles nonstop. We can’t wait until we can understand what he is saying. He is also very kind hearted. He likes to spend time with other kids and animals and is always looking to give hugs.”

Leaving such a lovable child at home is certainly heart-wrenching, but the realities of today are that people have to work to support themselves. “We both have busy work lives but also some flexibility to prioritize family,” Kate says. “We try to have dinner around the table as often as possible and plan lots of together time on the weekends.”

Austin, who works at the University of Minnesota, echoed that statement. “It is demanding but I have also found the U to be an incredibly supportive and balanced place to work. I was in the situation where I was working full-time and finishing my Ph.D., and while that was by no means easy, I had the support of my workplace and my family to make it happen,” she says, before jokingly adding “And now you can call me Dr. Calhoun (although no ones does).”

Many would call them a “power couple,” with successful careers (Kate has worked in the nonprofit sector for over a decade) while building a family, but that’s a title that Austin and Kate eschew.

“I think it’s ridiculous,” Kate says. “We are like a lot of families, doing our best to be good parents, partners, and colleagues. The trick for us is having fun while we do it. If we can succeed at all of those things and have fun while we do it then we have hit the jackpot!”

Austin, on the other hand, finds it flattering, and kind of funny. “I can think of 100 other couples more ‘powerful’ than us,” she says. “However, I think we are just really good at being Austin and Kate and Grady, and that it depends on what you think is ‘powerful.'”

Of course, behind every great couple (whether powerful or not), is a great support system, something that Austin and Kate have in spades. Kate’s family has been supportive throughout her life, from coming out to getting married to having a baby, something she deems “priceless.”

According to Austin, they have amazing family, both by blood and choice. Austin, originally from outside Washington, DC, is a transplant to Minnesota. “I am often overwhelmed by how welcoming my Minnesota family has been to me,” she says. “Kate’s family and friends welcomed me into their circle easily and I know we can count on them to bring over a hotdish or babysit Grady if the need arises. I also am lucky to have the support of my parents and siblings on the East Coast. They all made the trek from the warmer mid-Atlantic region to Minnesota for Christmas, which was awesome.”

As for the future, the couple hopes it holds more of the same, both the mundane and the adventures. They’re also hoping to add another baby within the next couple of years. But for now, they’re basking in the rewards and challenges of raising Grady.

“Grady is a mirror and a sponge,” Austin says. “Kate told the dog to ‘pipe down.’ And Grady has been a mimicking that all around the house (it sounds more like ‘PA DA’). It’s a good reminder that he absorbs so much and it makes you want to be the best version of your self.”

Kate adds to that thought: “Grady has added so much to our lives, he has brought us closer together in many ways,” she says. “Every day with him is new and exciting and we feel grateful to be going through this adventure together. We try to make space for each of us to take time for ourselves by going to yoga, the gym, or out with a friend. We also have prioritized date nights at least twice a month. We know that we are better parents and partners when we address our whole self.” 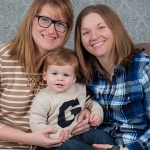 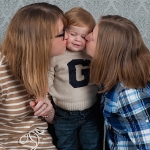 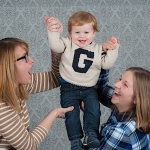 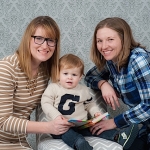 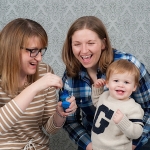 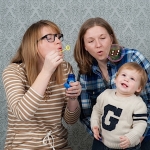 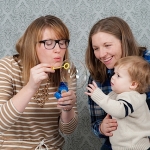 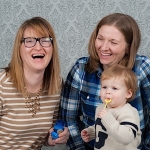 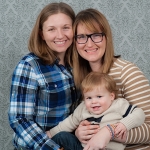 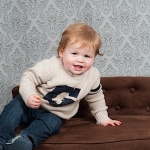 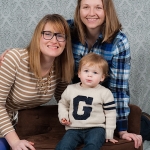 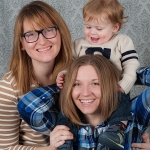 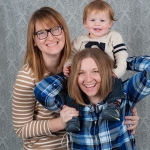