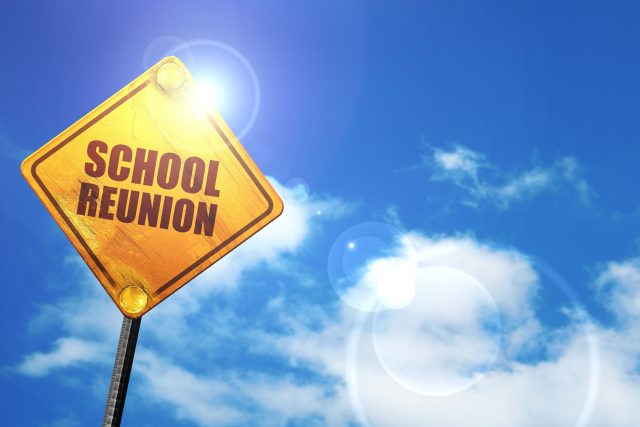 A couple months ago, I went back to Coe College in Cedar Rapids for my 40th class reunion, my first since I transitioned genders in 2009.

And in the way that only I sometimes do things, I totally miscalculated the emotional impact of meeting people who last saw me as a twenty-two-year-old dude named Ed.

It’s not like I didn’t have a plan. Weeks before the reunion, I had reached out to Jane, a classmate whom I had reconnected with since becoming Ellie Krug. We’ve met several times in the last ten years and Jane’s not only accepting of me—with much gratitude, she’s also become a real champion of my human inclusivity work.

We arranged that Jane and I and a third classmate, “Alex” (whom I hadn’t seen since 1979), would meet for drinks the night before the reunion. That hour-long mini-reunion went extremely well, with Alex seeming not at all phased by my transition.

Naively, I thought, Everything will be just fine, Ellie.

The next morning, a blue sky-but-chilly October day, had me at Coe early, which allowed time to tour an upgraded campus. I also visited the college’s library and found my old study spot—an austere cubicle next to a red brick wall and window. As a first-in-my-family college student, I was always studying, shooting for good grades.

Yes, I was one of those students.

I walked over to the football field where the reunion committee had set up a “beer and brats” tent. The plan was for Jane and Alex to meet me and we’d sit in the tent together—safety in numbers, and moral support for me, the odd-transgender-person out. When Jane and Alex were nowhere to be seen, I quickly saw a text from Jane reporting that they would be late because her car had been broken into at her motel overnight.

I responded, In Cedar Rapids? Wow.

This meant that at least for a while, I’d be on my own in the very crowded reunion tent. Nervous, I passed on the brats and went only for the beer. I had half a cup downed when I spotted “Bob,” a Coe classmate and extremely successful local lawyer who I knew both before and after my transition. (As I have written elsewhere, the Cedar Rapids legal community—where I practiced law for more than twenty years—was extremely supportive when I came out in 2009.)

“Good to see you!” I said, relieved that I no longer had to sit alone, and happy that I didn’t need to self-disclose to Bob about my transition.

In short order, several early sixties-something men appeared, drawn to Bob, who was way more popular at Coe than me. (His boast, “I was in the library just once in four years, and that was only because I was drunk.”) One of the men, “Frank,” pushed his hand forward and introduced himself. “Who are you?” he asked.

At that moment, a bolt of fear shot up my back. Clearly, I needed to explain about going from Ed to Ellen, but I really hadn’t laid out in my head how I’d do that.

“Uh, hi,” I answered stammering, and briefly grabbing Frank’s hand with my own. I pushed at the words.

“You would remember me as Ed Krug. Now I’m Ellen—really, I go by ‘Ellie.’”

I watched Frank’s head pull back slightly. “That’s something,” he responded.

Crap, I said to myself. This isn’t going like I planned.

It was because I really hadn’t thought things through. Ten years had passed since I came out, and I was way too rusty at self-disclosing. A better word might have been “ignorant.”

Never mind that I see myself as a strong woman, confident even, so much so that a man recently called me a “*itch.”

In that space, I was just a scared rabbit, worried about being judged and getting “the look” that signaled I was a freak.

Soon there was another male classmate and then a third. With each, I bumbled about transitioning and my fear grew exponentially. This was absolutely no fun.

Eventually, Jane and Alex arrived to rescue me. We found a spot to sit and drink beers, but by then, my resolve had evaporated. I needed to go.

I whispered to Jane, “I have to leave. This is too uncomfortable for me. I didn’t expect how difficult it would be.”

It was a nice gesture, but I was panicking.

She hugged me goodbye and I sprinted out of the tent.

That, I’m totally certain, will be my very last college reunion.

Ellen (Ellie) Krug, the author of Getting to Ellen: A Memoir about Love, Honesty and Gender Change, speaks and trains on diversity and inclusion topics; visit www.elliekrug.com where you can also sign-up for her monthly e-newsletter, The Ripple. She welcomes your comments at [email protected]