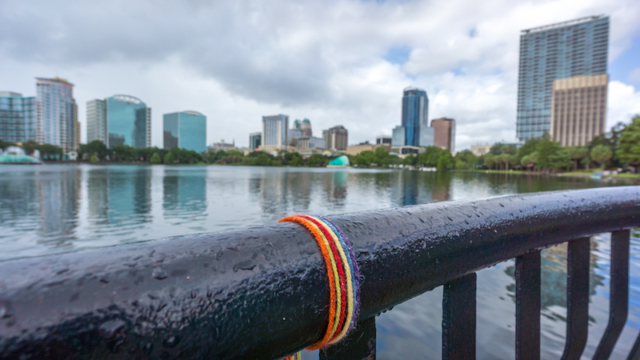 Makeshift memorial dedicated to the victims of the shooting at Pulse nightclub set up around Lake Eola, Orlando, FL. BigStockPhoto.com

Makeshift memorial dedicated to the victims of the shooting at Pulse nightclub set up around Lake Eola, Orlando, FL.
BigStockPhoto.com

Words which, borrowing a phrase, will live in infamy within the GLBT community.

How I hate writing that too.

By the time you read this piece, almost a month will have passed from the June 12 murders of 49 innocent humans. We will have had our share of vigils, candle-lit prayers, and the victims’ public name-recitations.

I’m sure that news media personalities and cameras will have moved on by now; similarly, we’ll no longer nightly hear from shooting survivors or from family members and loved ones of those who didn’t make it.

No, in the moment your eyes read these words, the country — the world, actually — will have moved on to something else, perhaps even to another horrific mass shooting or some other sad incident in which humans die because of ideology or religion or simply because of an individual’s grave, uncontrollable depression.

We humans are like that, you know. Limited attention spans, focused on only the latest and most immediate.

Yet, please let me double back to the shooter (like other media commentators, I will not use the gunman’s name) and what we’ve learned about him (at least by the time I pen these words). As the FBI publicly stated, there’s a need to create a profile of the shooter to prevent similar tragedies from occurring. Amen to that.

We know the shooter was of a particular religion that’s generally intolerant of GLBT persons. We also understand that at the moment of the horror, he proclaimed allegiance to ISIS, that human-killing machine.

Along with that information, we’ve heard the shooter had significant behavior issues in public school and, later, in community college. We know that he abused the first woman he married, whom he subsequently divorced; later, he remarried and fathered a son.

Immediately after the tragedy, the shooter’s father rationalized that he chose Pulse because of an intense hatred for gay persons, as represented by statements the shooter made when he witnessed two men kissing in public several weeks earlier.

Was it actually (and simply) hatred of gay men that caused the shooter to enter Pulse with an arsenal of destruction? Or was it self-hatred that fueled this tragedy?

For my purposes, what we’ve also learned is that the shooter had a Grindr profile (along with pictures) and frequented gay bars (including Pulse) for several years. Several gay persons have come forward to say that they had interacted with the shooter at gay clubs, although no one has admitted to hooking up with him. (Perhaps that news will avail itself by this piece’s publication.) Since the shooter lived more than 100 miles from Pulse, one can assume that he tried to keep that part of his life a secret. (Note, as this piece goes to press, the FBI reports that it can’t find a “paper trail” linking the shooter to gay-focused activities; that’s not entirely surprising if the shooter wanted to avoid tipping off anyone as to his true identity.)

Secrets. Compartmentalization. Growing up in intolerant familial and religious communities. Told in so many ways that being “you” is wrong to the point where we can easily discern a level of self-disgust and hatred.

It all sounds so familiar, doesn’t it?

I don’t believe for a second that the shooter opened a Grindr account or visited far-away gay clubs to plan some kind of mass casualty attack.

Rather, and this isn’t a newsflash to anyone who’s struggled with a sexual or gender identity, the shooter was testing the waters, just as we all did during our collective journey of moving from self-loathing to self-truth. It’s just that the shooter (I’m theorizing, of course) never got to self-truth.

Instead, he remained stuck at self-loathing; more likely it was self-hatred. Big time.

It doesn’t take a rocket scientist, let alone an FBI profiler, to understand that the shooter’s internalized feelings eventually morphed into a fanatical hatred of those who would tempt him. What better way to end the temptation than to extinguish the tempters, especially when you know that you’ll die (e.g. you’ll end your own inner suffering) in the process?

In support of this theory, I cite the transcripts of the shooter’s conversations with law enforcement and the media. While he pledged allegiance to ISIS, he didn’t utter a single word of disgust about GLBT people. One would think that if he was acting on religious principles against gays, he’d mention it somewhere in his rantings. Yet, that apparently didn’t happen.

Assuming I’m right about all of this, then we’re faced with the obvious question: how do we change the human self-narrative relative to sexual or gender identity?

In other words, what will it take for everyone to understand that being GLBT isn’t a choice?

Ellen (Ellie) Krug is the author of Getting to Ellen: A Memoir about Love, Honesty and Gender Change (2013). She frequently speaks and trains on diversity and inclusion topics; visit her website at www.elliekrug.com. She welcomes your comments at [email protected].