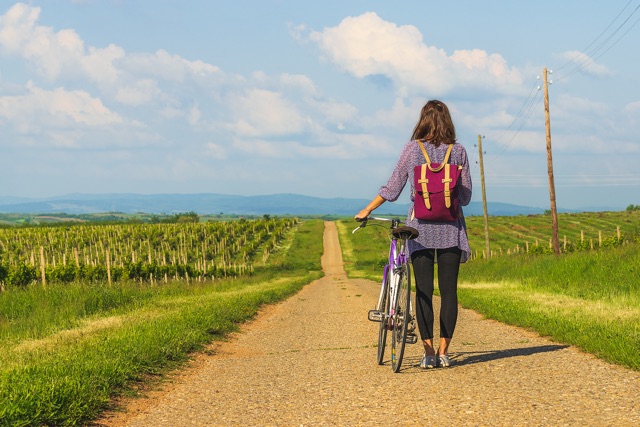 In January, I moved from a cramped twelfth-floor heart-of-downtown Minneapolis condo to a two-story house with a walkout basement in Victoria.

Actually, rural Victoria is more apt: the house—newly constructed in a development with many soon-to-be-built homes and townhouses—is within shouting distance of a dairy farm complete with a towering silo and large white barn. From my  sunroom every morning I watch as black and white cows emerge from the barn onto a large field. For some reason, the scene of three dozen cows grazing on a few acres of plant stubble gives me great joy, if not genuine pangs of exuberance.

Call me weird; it’s okay, I can take it. I really don’t care.

On my first bike ride of the season, I rode past that farm down what turned out to be a curvy two-lane blacktop. Soon, I encountered more farms with their naked earthen fields and sleepy John Deere tractors.

A couple more miles beyond that, blacktop gave way to dirt road and the granular sensation of city bike tires navigating hardpacked brown soil. Had I not known that I was just thirty-five miles from the heart of Minneapolis, I would have guessed I was back in the middle of Iowa, away from everything modern or queer.

Out here on the prairie, as I look west, there’s only blackness against the night sky; it reveals a hundred different stars and vast constellations overhead. Living in downtown for a decade, I had forgotten what a “normal” night sky looks like. Heck, at the place-before-last, I looked into the lit eighth-floor window of the building across the street at night.

Then there’s the wildlife. A month ago, I watched a brown and yellow hawk, majestic and stunningly confident, swoop down and grab something—a mouse? It flew off as if it owned the place, which quite frankly, it did—the sheriff-hawk-in-town.

Several days later, I was awakened at three in the morning; the sound was a wild screech-howl, and it came from several coyotes who couldn’t have been all that far from my bedroom window.

I immediately thought, “How wonderful!” At that very instant, I also realized that a beam of white light was shining down from above—from a four-fifth full moon—straight through the window onto my pillow. The coyotes, no doubt howling at the big white ball in the sky, had given me a wake-up call.

Hey, you human, this is more important than sleep. Pay attention.

Heeding that call, I refused to close my eyes. Instead, I suddenly felt giddy and  laid there soaking up the moonbeam. It was an unexpected gift; one that was long overdue for this former city dweller.

On another bike ride, I rode west and watched the dusk-day sun pause just above the big-sky horizon, framed only by a couple tall oaks. I stopped to snap a picture and noted the absence of glass or concrete—what would have certainly factored into any scene in downtown Minneapolis—to impede my view.

To be totally honest, I loved city living, and there are times that I certainly miss the buzz.  In warm weather, I could bike or walk to just about anywhere in a ten-mile radius from downtown center; life was convenient, healthy, and quite interesting given all of people that I’d no doubt encounter.

But what I didn’t understand is that years of downtown condo living had divorced me from the land, along with its smells, contours, colors, and measured pace.

Maybe growing up in Iowa in the 60’s and 70’s, where the school bus (and then my battered Toyota) banged down gravel roads past tall corn or bushy beans, is what  first got me connected to the land. I didn’t appreciate it then, for sure. Age, however, has a way of making you realize what’s important.

It turns out, as the last couple months have so vividly reminded me, that being connected to the land is critically important to my emotional wellbeing. That connection has become an orienting point, a pacing mechanism for both my heart and brain.

It reminds me of what is real. And important.

At sixty-four (and what some might argue is way too old for a Lavender writer), I’ve started out on the last good leg of my life. It was not at all expected that that leg would have me living in a “villa” home in Victoria.

Yet, this is where I find myself and I’m grateful for it. City girl or not, I’ve had the chance to live quite a life. I think it would be cool if I can close that life out listening to coyotes in the dead of night and watching hawks command territory.