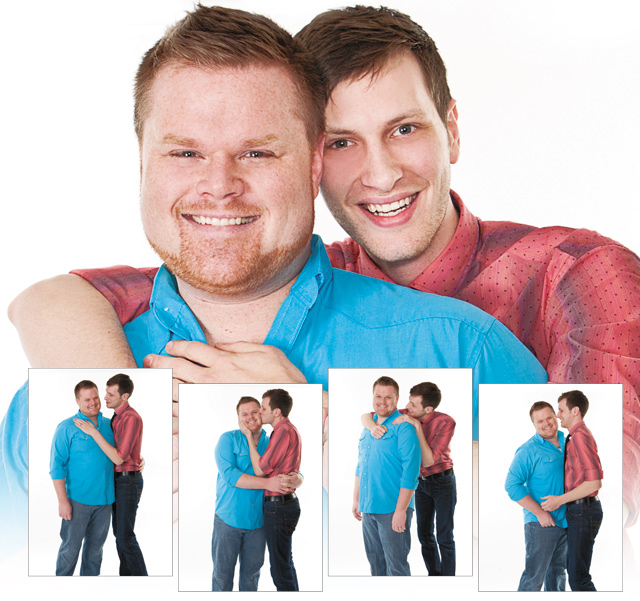 At first glance, the moment of Nick Kunz and James Kennedy’s engagement wasn’t exactly picturesque. It wasn’t elaborately planned, nor did it take place in an idyllic location like something out of a romantic comedy.

The conversation began with the phrase “if we get married” when thinking about the future. This gradually became “when we get married… but still in the future” as the two became more certain of what they wanted. As they sat on the couch in their Uptown Minneapolis apartment this past September, Nick asked the question, “Where do you see our relationship in five years?”

James’ answer? “A house, maybe a dog, and marriage.”

James and Nick met while in rehearsal for the Bloomington Civic Theatre’s production of “The Scarlet Pimpernel” in 2009. James was 20 and a sophomore at the University of Minnesota studying dance, and Nick was 26. James remembers being immediately attracted to Nick at their first rehearsal and charmingly started a conversation with him during their first break. James wanted to keep the momentum going. Luckily, the musical featured a song performed entirely in French. James, who had taken five semesters of French, quickly learned that Nick had no experience with the language. James saw this opportunity and claimed the moment. “I suggested that I could tutor him and teach him the pronunciations. Of course with no ulterior motives whatsoever,” added James coyly.

Because the show’s run required that the two see each other for at least five days a week for a period of two months, Nick described the beginnings of the relationship as a “showmance turned romance.” Because of the difference in age and where they were in their lives, Nick was skeptical about the longevity of the relationship and doubted that it would last past the final fall of the curtain. James, however, remembered it differently. Nick was not looking for just a short-term relationship, but assumed that James, who was then still a student at the University of Minnesota, didn’t want the same thing. James immediately called Nick “an ass” for making that assumption and expressed that they wanted the same thing: long-term commitment.

Fast forward a few years and the two are just beginning to plan their wedding, tentatively set for April 27, 2014. The engagement has been a joyful continuation of their relationship, which comes with the benefit of a ‘princely’ new title. “I love calling Nick my fiancé,” said James.

The engagement has also provided the couple an opportunity to think more about their life together. Nick looks forward to a change of residency from their apartment “because James said that we can’t move into a house until we get married.” James, who came from a family of 11 siblings, looks forward to raising children. “A very large part of my heart is dedicated to good fathers who love and spend time with their children,” said James, “so I’m excited that that person gets to also be the man I married.”

With over a year before the big day, the scope of the wedding has already changed. The initial price tag of their dream wedding, after considering all of the tiny details, was sobering. However, it was enough to make them quickly focus on the true importance of the ceremony: their love.

“Why are we having a wedding in the first place? Is it just to throw a big fancy party? Or is it to stand in public in front of our family and friends and devote ourselves to one another?” James asked. “Methinks it’s the latter – with just an innocent peppering of the former.”

Wedding planning hasn’t been without its fun. Aside from helping the couple realize even further their love for one another, planning their wedding has granted them the ability to create their own rules and completely personalize the experience. Both men will have “Groomsmaids” in addition to Nick’s “Best Ma’am” putting a refreshing and kitschy spin on traditional wedding roles.

Coming off of the defeat of the Marriage Amendment last November and with upcoming legislation in the Minnesota House and Senate, support for same-sex marriage in the Land of 10,000 Lakes is at an all-time high. The process to legalization is not, however, of utmost importance to the couple. “We’re getting married regardless,” said James, “and no, we’re not getting ‘married.’ We’re having a wedding, not a ‘wedding’.”

“I’m getting married because I love Nick, not so I can get a tax break”, James said, “I don’t want to wait any longer than I have to for my husband.”