Senior Loving: A Life of Laughter 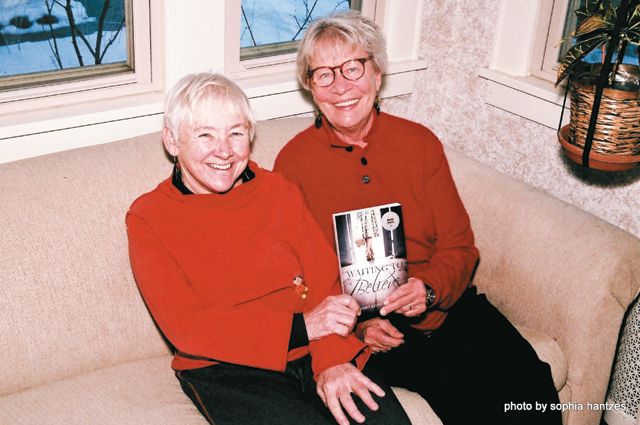 One had given up on love and the other was ready to meet and greet.

One used to be a nun and the other wrote a book about it.

Both love the other.

J. Colleen Breen and Sandy Bloom were both single and had friends in common, despite having never met each other. In 1995, one of these friends approached each woman separately with the same idea: “I know someone that I think you would enjoy meeting.” The way every blind date nightmare begins.

“I initially said, ‘No, I’m through with love,'” Bloom says, who had ended a 13-year relationship only a couple years before. “But after a couple weeks, I rethought it. I had Colleen’s phone number and asked if she would like to meet and we’ve been meeting ever since.”

Breen saw it differently. Having been single for a while, she was ready to get back in the dating game, admitting that she was open to meeting from the get-go. “We did talk a lot and laughed, I remember,” she says. “I think Sandy found me funny and that is always good.”

After her initial hesitation, Bloom jumped in head first. “It had been a million years since I had dated and when I met her, I just thought, ‘Oh, golly, this is really fun,’” she admits. “And we talked—talking was the thing. We talked about books and that was the initial pull for me: here is someone I can talk to about books; so I was immediately attracted. We had our first real date after that get-together.”

Aside from a love of books and laughter, the women shared a value system of giving back and working with people. Breen worked as a licensed clinical social worker, primarily doing therapy and education with adults, retiring three years ago from Fairview Behavioral Services. Bloom, on the other hand, has a background in nonprofit management. Having worked with the Girl Scouts and Red Cross, Bloom’s last full-time position was as the executive director of the Cedar-Riverside People’s Center. “We both spent our careers in helping people,” Bloom says.

In fact, when they met, and for many years thereafter, the two women worked within about two blocks of one another, Fairview and the People’s Center both residing on the University of Minnesota’s West Bank. “I remember one night, I was in the middle of a board meeting standing in front of about 20 people,” Bloom says, before taking a break to laugh. “I looked out the big window and there she sat in her car at the curb looking at me. It was very distracting.”

The couple made a commitment in 1997, two years after meeting, without a grand proposal. In their true fashion, the couple laughs before explaining that there wasn’t a pivotal moment on bended knee; they “just sort of slid into it.” Bloom explains that they became exclusive, seeing more and more of each other, their love evolving, and it just became obvious that this was what they were wanting.

One factor that may have instigated their commitment was a roommate, oddly enough. Breen had a person sharing her house, renting a room, who, incidentally, had been her realtor when she bought the house. He had become a mutual friend but had decided to move back East. Seeing as he was vacating the house, the women thought it was a logical time to make it semi-official and move in Bloom’s belongings.

Without missing a beat, Bloom jumps in to clarify: “We weren’t like that old joke about lesbians. What do lesbians bring on their second date? A U-Haul.” A statement to which both women fail to stifle laughter.

The two also grew closer through their love of their families and traveling, doing plenty of international travel together. “Those kinds of experiences have been important to us,” Breen says. “So yeah, we did just slide into it.”

With the passage of marriage equality in Minnesota, Breen, now 70 years old, and Bloom, 76, have no plans to take their relationship to the courthouse.

“We talked about it quite a bit,” Bloom says proudly. “What we finally decided is: we are very glad that option is out there on the table and quite widely accepted. But, for us, we made our commitment to each other. We had a party with loved ones, exchanged rings, and that was it for us. That was all that we really needed. We didn’t feel the need to make it legally official.”

Twenty years later, their love for each other shines through, and anyone questioning what makes the relationship so strong need only hear one story: the kitchen remodel. Beginning in January of 2014, the process began as the simple task of replacing an oven because the door had broken off. Cut to six months later and their entire kitchen has been redone.

“We said that if we could get through that and still be together, we can get through anything,” Bloom says with a hint of nostalgia before adding, “That kind of thing is stressful, but one of the things I enjoy the most about [Colleen] is she makes me laugh. I think she’s the funniest person I’ve ever known, and laughter goes a long way in making a relationship good. We laugh together a lot.”

Bloom’s statements are self-evident as the couple are barely able to make it through a few sentences before breaking out in laughter once again. Breen adds, “Being with Sandy is pretty much wonderful. It is so special to be with someone who gets you—that’s a pretty big treat in life—and Sandy does that for me.”

This is where Bloom jumps in, beaming. “Not that we’re joined at the hips! The prophet says, ‘Let there be spaces in your togetherness,’ and I do believe in that. But we have so many things in common that that’s very enriching in a relationship.”

This kind of banter has drawn several young gay couples to approach them in public and admit their admiration, saying they’d like to be just like them, when they get older. “They bought us chocolate martinis!” Bloom exclaimed, with a smile. Or the young lesbian couple who tapped them on the shoulder at the Town House and declared, “We think you’re the cutest couple on the dance floor,” prompting more free drinks.

Clearly, they serve as a great example of what true love can look like. The secret to success? Bloom thinks it’s about open communication, describing how she notices so many couples sitting across from each other in restaurants and not saying a word to one another. For her and Breen, the dynamic is different; a lull in conversation is rare.

This tight bond helped Bloom realize one of her life-long goals. A closeted writer, Bloom had always dreamed of writing a novel but had no subject ideas. “I couldn’t come up with the story I wanted to tell. Then, in the year of ‘97, after Colleen and I had been together for two years, it occurred to me that my story was right in front of my face.”

That story being Breen’s personal history. The first 17 years of Breen’s adult life were spent as a nun in Iowa, before she decided to leave the convent (“A story that is best saved for another interview,” Breen jokes).

“I was not Catholic and didn’t know that much about the Catholic Church, so when we got together she was telling me all about what that life was like,” Bloom says. “I was aghast at how harsh that life was, and I thought this was the story I want to tell.”

Her novel, Waiting to Believe, published in 2013, took 14 years to finish and details what life is like in the convent (“because it’s not how it’s usually portrayed”). Disguised as a novel, it is rooted in Breen’s story and follows her trajectory. The formula proved successful, as the novel was a finalist in the category of Literary Fiction for the Midwest Book Awards last year and was recently chosen as the book of the month for KSTP-TV’s “Twin Cities Live” Book Club.

After documenting the past, the future looks bright. Their plan? To keep doing what they have been, because life is good. “I don’t see many things I would change except maybe a few house repairs,” Bloom jokes. “I don’t think you fix something that isn’t broken and I think we have a pretty good handle on what it is to live a good life.”

Breen follows up with her own opinion on house repairs. “Sandy mentioned house repairs (and we do have glaring needs for house repairs), but I think long-term relationships are like maintaining a home. At times you really have to pay attention to things that might need help, might need tending. It happens to all of us; we need to come back together after an area of conflict or tension. Keep working on it, don’t ever take it for granted, you have to keep working.”

After a pause, Bloom adds with a smile, “We just continue to enjoy each other and appreciate every day knowing that it’s a gift. We are all too often reminded of the fragility of life and whenever that happens, I take a moment to thank god for what we’ve got and how good it is.