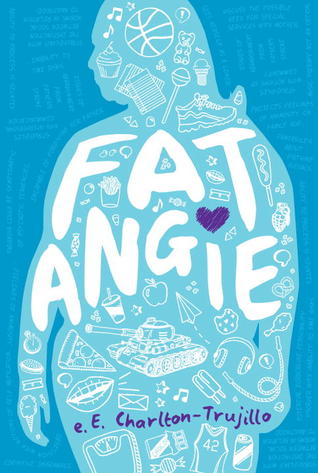 Fat Angie is not only fat and the school laughingstock, but she cemented her position as everyone’s favorite after attempting a Carrie-White-style blood-drenched suicide in the gym. With a razor blade. With the gym filled to capacity. She has a “can’t be bothered” mother, a hateful adopted brother, an absent, guilt-gifting father, a hovering nemesis named Stacy Ann, and, looming largest of all, the offstage presence of her sister who is a skinny, gifted, super-athlete, war-hero captured and missing in Iraq. Only Angie believes she is still alive.

What are the odds that all will go smoothly when gorgeous new student, KC Romance, marches into Dryfalls, Ohio, in her 18-eyelet black combat boots and wants to be Fat Angie’s friend? One hundred percent–not. KC is California cool, has a purple heart tattoo, legs that don’t quit, and speaks a staccato crypto-teen lingo that leaves Fat Angie stunned, grasping at phonemes.

Charlton-Trujillo’s text moves at KC’s pace: quick, scattershot, with asides that elucidate olden terms like “ABBA,” dragging the reader breathlessly along in her wake. Suddenly, Fat Angie braves her taunters, her family, her instinct to hide, and immerses herself in a bid to make one of two slots on the varsity basketball team, something no freshman other than her sister had done.

Dark, comic, refreshing, Fat Angie succeeds in ways she cannot predict, tentatively embracing life’s loves and inevitable losses, warily opening herself to those who care: KC, her neighbor Jake, and even, to a degree, her can’t-be-bothered mother. An invigorating, whirlwind read. 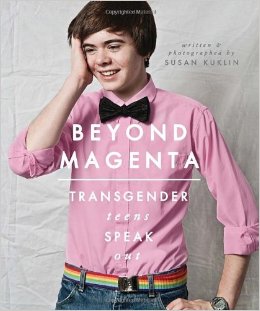 They told me
No.
Said, ‘What are you?’ said, ‘You gotta choose’
said, ‘Pink or Blue?’
and I said, I’m a real nice color of
magenta

These words are from “Untouchable,” written and recited by 16-year-old Luke, at Madison, Wisconsin’s GLBTQ teen theater group, Proud Theater.

Author Kuklin aimed initially “to write and photograph a non-fiction book about sex and alienation; about boys who realize that they are girls and girls who realize they are boys,” but while interviewing her sources, Jessy, Christina, Mariah, Cameron, and Nat through the Callen-Lorde Community Health Center, and Luke at Proud Theater, their voices became the book.

Each individual is fiercely different, some choosing the pronoun of their new gender, others eschewing the binary for them and they. Mariah did not want photographs (“I’m telling the truth about my life because I think you should know about me and my community. But I’m not ready for people to see me”); Nat, comfortable in their androgyny, wanted photos in black and white, while Cameron, who also uses “they,” presented themselves in a gallery of splendidly nuanced poses. In Cameron’s words, “Gender does not have endpoints; it’s three dimensional.”

Jessy, whose mom is supportive, is happy; Mariah, without a support system, has endured more difficulties, but perseveres. Christina began transitioning while attending a Catholic high school for boys. Her mother is supportive and Christina has graduated from the Fashion Institute of Technology.

A much needed representation of actual teens; important reading for young transgender people and those who support them.