Put On A Happy Ace 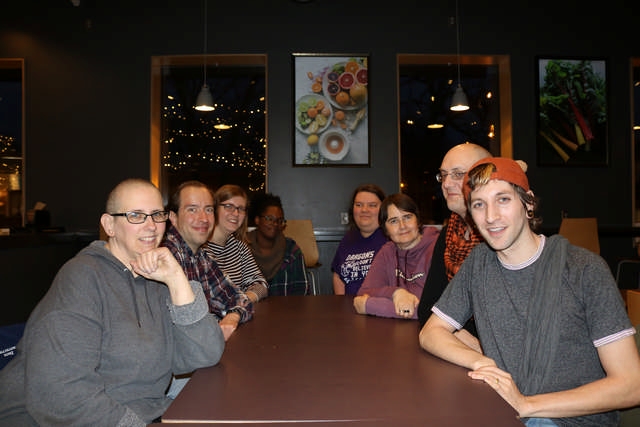 “We have feelings and emotions.”

The moment the words are out of Tyrell’s mouth, the entire group erupts into nods, mhmms, and “yass”es. The eight people at the table are a smallish representation of the Minnesota Asexuals MeetUp group and every single one of them echoes Tyrell’s sentiment at some point while we chat. “I’m a legitimate person. I just experience attraction differently,” says Joci. “We don’t think that people who aren’t asexual are gross,” adds Grant.

An asexual person might not be swept off of their feet by a romantic gesture or aroused by a beautiful person, but their capacity for joy, sadness, love, and any other emotion does not operate at a lesser degree than it does for anyone else.

Asexuals (sometimes shortened to “aces”) are, simply put, human beings with feelings and emotions. Emma compared her response to romance and sex to being color blind or having the genetic quirk that makes cilantro taste like soap, “I take your word for it that [sexual attraction] exists,” she says. It’s just that for everyone at this table, cilantro tastes like cilantro and red looks suspiciously like green.

“We are people with feelings” seems like an easy conceptual hurdle to clear, but everyone in the group had a story proving that not all of us clear that hurdle. People tell the ace community that their feelings and emotions are not valid in all kinds of ways. These range from well-intentioned friends or family members who “feel sorry” for the asexual in their life, potential partners who think they can “cure” an ace, people conflating asexuality with celibacy or “purity culture”, and sometimes GLBT folx making aces feel unwelcome in the GLBT community.

The Minnesota Asexual group agreed that the Twin Cities GLBT community has been welcoming overall. They have had a tent at Pride (both Twin Cities and Rochester) in the past (and will again this year! Go say hey!) and that experience has been a net positive. There was no outright hostility at TC Pride, but they caught a few “derisive look[s]”and fielded a few unintentionally hurtful questions. However, every interaction with a new ace (and sometimes curious, supportive parents) makes it worth it.

Being asexual is not a standalone identity and it does not preclude relationships. Three of the attending group members are married and half of the remainder have partners. Being asexual does not require being alone, only dating asexuals, being straight, being binary, or being a prude. The Minnesota Asexuals occasionally go to the Black Hart to support Dean Demonic, an Ace Drag Queen. 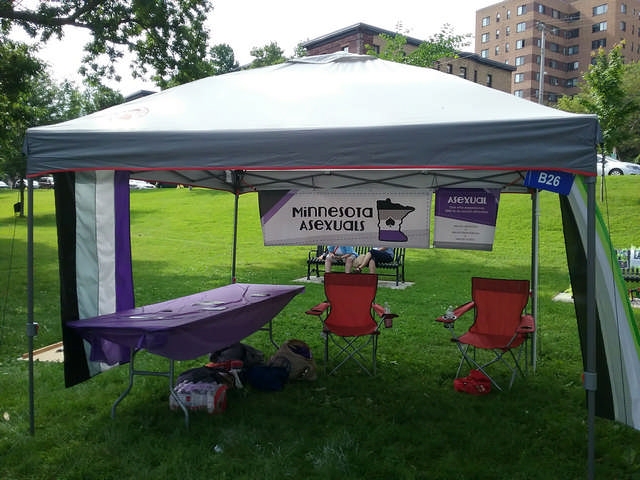 Full disclosure: I’ve been lurking the Minneapolis Asexuals MeetUp page for more than two years, but before this interview, I had never met them. They have more than 400 members online, but a lot of us hesitate to show up in person. Their meetings hover around 10-15 people, and although there are a few members who show up regularly, there are also plenty of sporadic attendees. Everyone who came to the interview had been a member for a year or more and several of them had not yet met each other. So don’t be like me. Chances are pretty good that when you show up, you won’t be the only new face.

This is a genuine, good-hearted group of people. Half of their meetings are activity-based (game nights, trips to the Black Hart, etc.) and the other half is discussion-based. These discussions cover the asexual experience in all its shades of gray: recent personal revelations, complaints about the latest person who thinks one of them just hasn’t done sex right yet, conversations about ace celebrities, and sometimes they just kind of sit around and stare at each other.

If you are not quite ready to meet other aces in real life (or if you are not ace and want to learn more about aces on your own time) the group had several suggestions on good online and print resources. Amelia Ace and the “Letters to an Asexual” are two favorite YouTube resources and Julie Sondra Decker’s The Invisible Orientation has been formative enough to members of the group that at least one sent it to her family. As far as ace communities goes, Aven has great resources, but, like much of the internet, is “not well moderated.”

And if you just want to make the local ace community feel extra welcome at Pride this year, maybe stop by their tent with some cake. It’s their unofficial mascot.