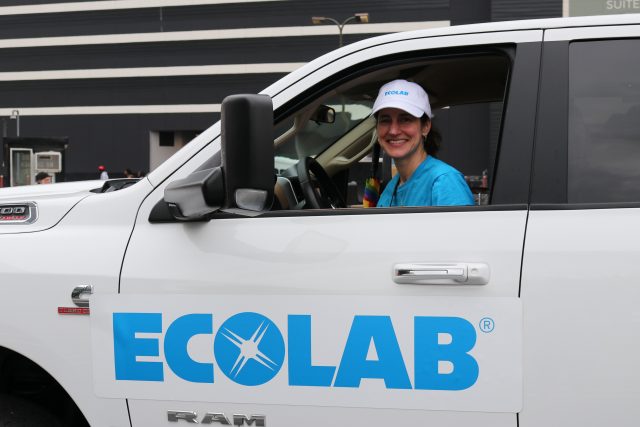 Ecolab is one of Minnesota’s hometown heroes. Headquartered in St. Paul, Ecolab services over 3 million customer locations around the world, making them the global leader in water, hygiene, and infection prevention solutions. In communities across the planet, people rely on the services and vital resources provided by Ecolab.

Working to provide meaningful inclusiveness in the workplace, Ecolab introduced the PRIDE ERG (employee resource group) in 2009. The group started small but has seen continuous growth since its inception; they’ve secured support from their company and their colleagues. In 2018 CEO Doug Baker and CHRO Laurie Marsh joined Ecolab’s PRIDE ERG for the company’s first appearance in the Twin Cities Pride Parade.

You’ve been involved since the formation of the PRIDE ERG. What are the origins and why was the group started?

I remember my boss called me into her office and asked if I wanted to meet with another employee who was interested in starting an LGBTQ+ employee network. I was out to my immediate team at work, and my boss was very supportive of me. In fact, she was instrumental in Ecolab establishing domestic partner benefits just before I started working at Ecolab in 2007. I paused for just a moment, thinking that I am able, because of the great work environment provided by my boss, to be my full self at work each day, and why wouldn’t I want that for everyone else? So, of course, I said yes.

We worked with HR leadership and the Culture & Inclusion team (what we now call our Diversity & Inclusion team), and established PRIDE as a way to help create a welcoming workplace for our LGBTQ+ employees and allies.

More than a decade later, what sorts of activities and events does your ERG get involved in, both in the company and out in the community?

Ecolab’s PRIDE ERG establishes a yearly plan that includes internal initiatives to help connect and develop its members, offering educational sessions that sometimes cross-over with our other ERGs, [we offer] quarterly e-newsletters to keep members connected with current Ecolab D&I initiatives, as well as pertinent updates about larger, public and global LGBTQ+ events/happenings.

External initiatives are also a part of PRIDE’s annual plan. Ecolab has earned the Human Rights Campaign’s Best Places to Work for LGBTQ designation for eight consecutive years, and ten overall—with a perfect, 100% score. We are also proud to be an HRC National Corporate Partner.

In 2018, Ecolab made its inaugural appearance in the Ashley Rukes Twin Cities Pride Parade, and in 2019, we added participation in the Festival as well. This year, we had weekly e-newsletters for our global PRIDE ERG membership, chock full of fun activities to do safely from home: webinars to view, articles and books to read, even 5k runs to do on your own (and win a medal!). We wrapped-up the month with a Virtual Pride Month Celebration webinar featuring some ERG updates, interactive online activities, and a Pride Month slide show featuring photos submitted by our PRIDE ERG members from around the world.

How big is the ERG today?

Ecolab’s PRIDE ERG is a global network with 444 members (and growing) in 21 countries. This is a 55 percent increase since 2017. We purposely launched the PRIDE ERG as a global network instead of just in the U.S., even though most of our members are in the U.S., because we wanted to make it known throughout the company that Ecolab was committed to this group and D&I across the globe, not just at our global headquarters in St. Paul, MN.

Why is having a LGBTQ+ ERG so important at Ecolab?

Ecolab has a deep commitment to diversity and inclusion, so establishing and growing our PRIDE ERG is a natural outcome of our leaders’ and employees’ dedication to a workplace where we all feel welcome and valued. As a global company, we are purposeful about what we can offer our employees and want to know we care about them, at work and when they go home, and that we value not only the great work they do for Ecolab, but their voices and what they have to share with us.

What does the future hold for the Ecolab LGBTQ+ ERG?

We are very focused on expanding diversity within our PRIDE leadership team, as well as establishing new PRIDE ERG chapter locations outside of the U.S.

Additionally, our PRIDE ERG, along with Ecolab’s other nine ERGs, do an exceptional job of looking at ways to collaborate along lines of intersectionality.

This year, PRIDE is working hard to not only re-envision how we provide support, resources, and events to our members globally through virtual offerings due to the global pandemic, but also renewing our awareness and commitment to how we provide meaningful experiences and open up dialogue to address racial and social justice issues.

Ecolab’s commitment is to help make the world cleaner, safer, and healthier. We know our impact is strengthened by our unique points of view and experiences.