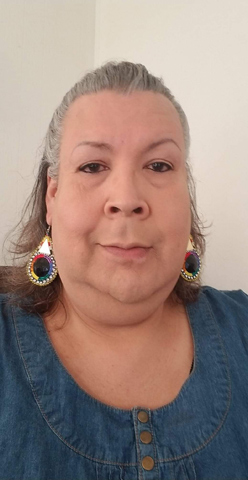 Reva D’Nova is a cultural and spiritual advisor, and Elder with the Minnesota Two-Spirit Society. Photo by Reva D’Nova

“Native Americans just know, we get it.”

Reva D’Nova, a Two-Spirit born to a Dakota mother and an Annishinabe father, is explaining the bullying  experienced growing up, which often centered around Reva’s sexual identity. “I have noticed as I’ve matured [that] …a lot of the bullying I endured growing up [was from] … European Americans. Native Americans know Two-Spirit people are honored sacred people,” D’Nova says, “I believe that’s why very few Native youth ever bullied me. Most are knowledgeable at a young age to what Two-Spirit means.”

The term Two-Spirit is not an old one, though the concept it describes is inherent to Native American culture. The 2009 Encyclopedia of Gender and Society, Volume 1 traces the word back to the 1990 Native American/First Nations gay and lesbian conference in Manitoba, Canada. The term Two-Spirit—which is inspired by the Ojibwe words niizh manidoowag, or “two-spirits”—was created to reject and replace the French word “berdache”, which is considered pejorative. The shift to Two-Spirit has been important because “berdache” is an inaccurate umbrella term steeped in colonialist ideals that purports to describe every sexual deviation from antiquated European expectations.

Although there are differing views on how to define “Two-Spirit”, a pamphlet entitled “Two-Spirit People of the First Nations”, available digitally on the Rainbow Resource Center website, reads: “Our Elders tell us of people who were gifted among all beings because they carried two spirits: that of male and female… These individuals were looked upon as a third gender in many cases and in almost all cultures they were honoured and revered.”

Despite ever-growing numbers of people who identify as Two-Spirit, the word has not been universally adopted by Native American communities.

“Not all Native Americans use this term, as it has different meanings to different Natives around the country,” D’Nova explains.

Not “all nations…have a concept of two-spirit people,” Geo Neptune, a Passamaquoddy Two-Spirit, explains in the Dec. 11, 2018 YouTube video “What Does ‘Two-Spirit’ Mean?” There are hundreds of Native American tribes, and if Two-Spirits were not a part of a tribe’s identity pre-colonialism, it might not make sense to embrace the concept now.

Secondly, to state the obvious, colonization forced Western ideals on Native Americans. The “Two-Spirit People of the First Nations” pamphlet suggests that “the colonizing forces and experience that Native People have gone through” has led to the adoption of the “homophobic attitudes that are present in today’s society.” Cultures that previously embraced Two-Spirits as “visionaries…healers and medicine people [who] … were respected as fundamental components of…ancient [Native American] culture and societies” were stripped of these beliefs. Luckily, this attitude is shifting.

There are queer Native Americans who avoid the term, usually because of its binary nature. The Encyclopedia of Gender and Society, Volume 1 explains that “the term emphasizes a Western idea that gender, sex, and sexuality are binaries” because its name implies a combination of two sexes. A number of different words were used by nations and tribes “to describe various genders, sexes, and sexualities.”

And yet, there are people like D’Nova, who embrace being Two-Spirit because it connects two important identities: gender and ethnicity. “I came out in the late 70’s,” D’Nova explains. “Trying to find a place to ‘fit in’ while living among your everyday garden-variety gay was probably the hardest part in my growth.” Reva goes on, “It wasn’t until the 90’s when I started my own Spiritual journey, incorporating Native Spirituality and really finding myself.”

There are several Two-Spirit groups in the Twin Cities. “I inter-mingle with and am a part of four groups,” D’Nova says. “I am a cultural and spiritual advisor, Elder with the Minnesota Two-Spirit Society – MN2SS. The MN2SS is helping to bring the community together in healing and cultural events.”

The Minnesota Two-Spirit Society has the strongest online presence of the four groups and D’Nova encourages people who want to support the Two-Spirit community or just learn more about it to check out their website at mn2ss.wordpress.com. “The MN2SS is very good about answering messages in a timely manner,” Reva says. “One tip I may offer to your readers, when approaching a member of the Two-Spirit Society, a small gift of tobacco should be presented [to respect] cultural protocol. [It is]…one of our four sacred medicines.”

If you reach out, Geo Neptune has an important reminder in their video: “Two-Spirit is not a poetic way for non-native LGBTQ people to express themselves.” The rich spiritual and cultural history of Two-Spirit people is integral to the identity, so if you are not Native American, please, celebrate and support our Two-Spirit friends, but do not claim the label for yourself.