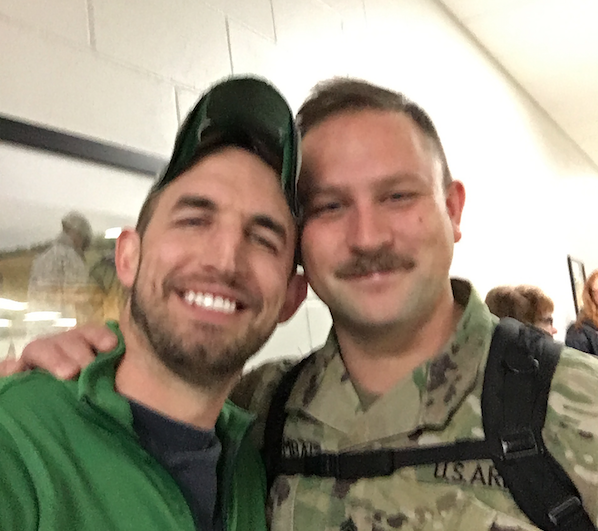 For Sgt. Garret Rombal, it was a no-brainer: he was meant to serve his country.

“My first thought was with the active army or Marines, but my brother convinced me to [join the National Guard] instead,” said Rombal. “I am an ammunition sergeant… and a sergeant. I am an NCO (Non-Commissioned Officer). It may also be worth noting that I have been in this unit since ’08, making me either the longest-serving member of my unit, or a glutton for punishment. Maybe both.”

A Twin Cities native who currently lives in Duluth, Rombal went to the now-defunct John W. Vessey Leadership Academy during his formative years. Rombal noted that he was quite the hellion, and maybe still is.

“I’ve done a bit of collegiate schooling, I’ll be going back soon enough,” he said. “If this damn quarantine gets lifted, anyway, I’m not a fan of distance learning.”

Rombal originally wanted to serve with the active army or the Marines, before being convinced by his brother to join the Minnesota National Guard instead. It didn’t take long for Rombal to fit right in with the Guard, serving one overseas tour in the Middle East, as well as also being previously stationed in Norway.

Rombal is also openly gay, having come out when he was a teenager.

“It’s hard to tell, looking back, which troubles came from being a little bastard and from coming out,” he said. “I came out officially at 14, and it was harder outside the home, at first. It still, to this day, doesn’t define me, so I never took anything personal if it wasn’t from anyone I didn’t love or care about. That isn’t to say it never happened, but the aforementioned blurred line makes it hard to distinguish.”

Rombal added that he believes that the Guard, and the military at large, have been progressing in terms of acceptance and inclusion of queer folk in their ranks.

“Some policies seem unfair, but are understandable from an understanding of combat readiness,” he said. “Having said that, there are still changes to be made.”

Rombal also benefits from having the support of his partner, especially during his deployment overseas, even as they have to both contend with the current COVID-19 pandemic on both sides of the globe.

“It has been incredibly difficult for him, especially during this deployment what with the Coronavirus [occuring] back home,” said Rombal. “He’s a tough one, though, I know he’ll be alright.”

The double whammy of being overseas and contending with the current public health crisis is understandably daunting, but Rombal’s dedication to serving his country has never been in question. And being himself among his fellow service members and superiors has never been a problem. As an openly LGBTQ member of the military, Rombal said that his cohorts at the National Guard have been nothing but wonderful towards him.

“I have had outstandingly supportive leadership,” said Rombal. “I haven’t had really any problems with the military, being who I am.”