Playing for the Other Team: Brittney Griner and Our Ugly Truth 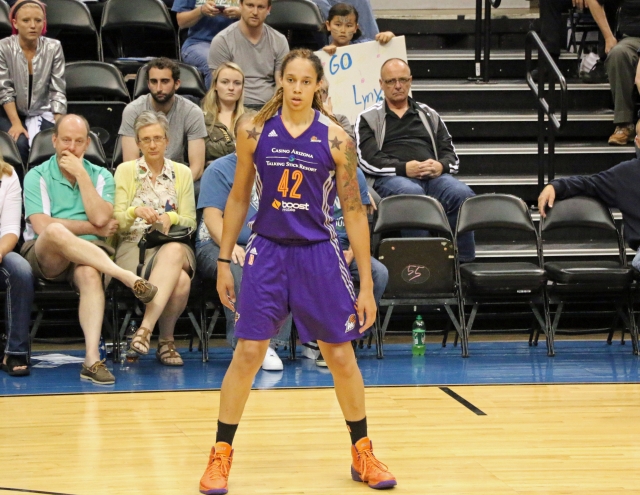 Sorry to rain on your Pride parade, but there’s something we need to talk about. In April, WNBA superstar Brittney Griner of the Phoenix Mercury and her fiancée Glory Johnson, also a WNBA player for the Tulsa Shock, were both arrested following a domestic dispute at their Arizona home.

This news came as a shock to fans of the couple who followed their love story both on and off the court. Griner and Johnson both have substantial followings on Instagram and were also recently featured on TLC’s Say Yes to the Dress!. Griner specifically has been an outspoken GLBT advocate since being selected first overall in the 2013 WNBA draft, even penning a memoir, In My Skin, on her painful experiences as a closeted athlete. Together, Griner and Johnson’s high profile as a couple was a much-needed image boost for a league that is only beginning to acknowledge its gay players and fans.

In a statement to the police that April afternoon, Griner stated that the fight was caused by the stress of planning their wedding and buying their first home. Through her lawyer, the couple apologized, saying, “Glory and Brittney sincerely apologize for the distraction this has caused their families, respective teams, the WNBA, sponsors, and fans.” Griner since has pled guilty to disorderly conduct charges, which will be dropped once she completes 26 weeks of domestic violence counseling. Johnson’s case is awaiting a pre-trial conference. The WNBA handed down a swift seven-game suspension.

According to a 2014 survey by the National Violence against Women Prevention Research Center, 21.5 percent of men and 35.4 percent of women living with same-sex partners have experienced intimate-partner violence in their lifetimes, numbers that are significantly higher than opposite-sex relationships. And this, my friends, is why we need to talk.

For all the Ray Rices and all the Floyd Mayweathers, gay men and women in intimate-partner relationships harm one another even more often. The stats are unbelievable and perhaps surprising, but they are our ugly truth. With marriage equality and the GLBT rights movement sweeping the nation, the unpleasant narrative of abuse in same-sex relationships is hidden, buried in scholarly journal articles. There lies the danger. How can we fix a problem we won’t acknowledge? How can we help each other if we continue to look away? And why do we look away?

Most people’s understanding of the model of intimate-partner violence looks something like: the abuser abuses the victim. The powerful abuses the weak. The man abuses the woman. There’s a misconception to outsiders looking at gay relationships that both parties in the relationship are equal. Therefore any violence becomes trivialized. To many people, two men fighting is just two men fighting, not an abuser and a victim. Women in domestic violence situations are marginalized in the same manner. Griner and Johnson were just in a “catfight”; they just had “some drama”. The fact that the injuries they sustained were scratches and bite marks does nothing to help clear up the seriousness of the encounter. And regardless of their Instagram photo (and wedding photo) since the incident depicting them jokingly biting at each other, it was indeed serious.

Sometimes, too, people encountering relationship violence don’t themselves understand that what they are experiencing is actually domestic violence. The Power and Control Wheel diagram is a common tool used by domestic violence experts, developed by the Domestic Abuse Intervention Project, which outlines methods of abuse. It’s necessary to note these methods here, both as a reminder for ourselves and to observe where same-sex domestic violence differs from the heterosexual population according to an adaptation of the wheel by Roe and Jagodinsky. Tactics include:

Intimidation, where one partner makes the other afraid with looks, actions, and gestures. Smashing objects, abusing pets, displaying weapons.

There’s emotional abuse, where one partner belittles the other, through name-calling, questioning their sexuality, playing mind games, accusing them of being mentally unstable, humiliating them and putting them down.

When one partner controls what the other does, and who they speak to, it’s considered isolation. They may use jealousy to control the other, and demand to know their whereabouts, or cut them off from their family, friends, or the gay community.

Minimizing is a tactic used when one partner makes light of the abuse, saying it didn’t happen or that the other partner caused it. The partner might accuse the victim of mutual abuse, blame alcohol or drugs as being responsible for their behavior, or blame being gay.

Using children is also a scheme in domestic abuse situations. One partner keeps the other from seeing the children, or uses the child to relay messages. They make the other feel guilty about the children, or even abuse them. They might also out the victim to ex-spouses.

When one treats the other as a servant within the household and makes all the big decisions, it’s considered to be using privilege. They act as the “king of the castle”, and define the roles or status in the relationship.

Economic abuse is lesser known. One prevents the other from getting or keeping a job, making them ask for money. They interfere with work or education, and put assets in their name only. Or contrastingly, they make the other partner support them, possibly making them steal or commit fraud.

And then, of course, there is outright physical abuse, coercion, or making threats to harm people or destroy things. They threaten to leave or commit suicide. They stalk or hound the other. And again, they could threaten to out the other to friends, family, or colleagues.

There are many reasons why those in abusive relationships choose to hide the mistreatment from family and friends. There’s shame and denial, of course, but GLBT victims also speak of additional hurdles. One survivor reported to me that she had spent so much time and energy trying to win approval from her family and friends for her same-sex partner, that when she found herself in a domestic violence situation she was afraid to use her support network because she feared it would cause them to blame her sexuality. As her circumstances worsened, she sought out anonymous help, again to no avail. “When I called a shelter for help, the volunteers kept using incorrect pronouns. [They’d ask] ‘Are you safe from him?’ which made me feel like they wouldn’t take my abuse situation seriously because it was from a same-sex partner.”

Those who are in abusive partnerships who are not yet out of the closet have yet another reason to hide and further anxiety. Undeniably, it makes sense that those of us in same-sex relationships would fear rejection from the heterosexual population. The success of our marriage equality movement is due in large part to the fact that we’ve normalized our lives: we go to work, we walk our dogs, we pay our bills, and we watch Netflix. We’re just like you. We worry that if we show any negativity, any fault, we’ll lose our momentum and support. But these qualms and uncertainties should not (and do not) prevail over the needs of those in our community who live in fear from their intimate partners. We must share these stories. We must not look away. We must support one another, first, and not be ashamed. The strength of our community is built upon the strength we provide each other.

If you feel unsafe in your relationship and need help, contact OutFront Minnesota to speak to a trained domestic violence counselor, by dialing 1 from OutFront’s InfoLine at 612-822-0127 or 800-800-0350. Monday through Friday, advocacy services are offered at the Hennepin County Domestic Abuse Service Center located in the lower level of the Hennepin County Government Center. OutFront Minnesota also maintains a Same-Sex Domestic Abuse Hotline at 612-824-8434.