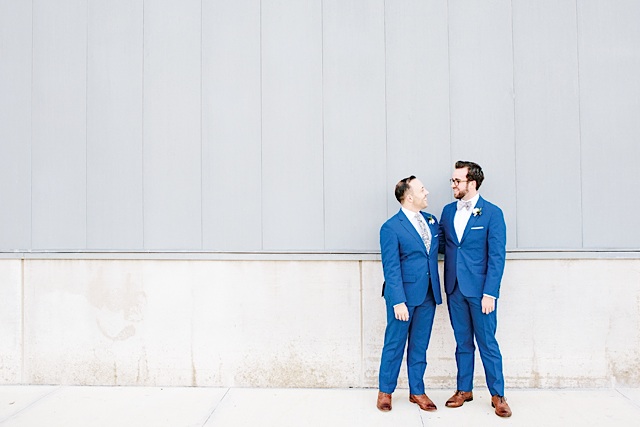 Except for the bluegrass band, it might have been any other brunch in Minneapolis on October 1, 2016. At first glance, it seemed like a casual, cakes-under-glass, bring-your-own-bongo, specials-scribbled-in-pink-limestone kind of affair: novelty donuts sprinkled with sweet rumors, dunked in custom coffee, and washed down with mimosas or Bloody Marys.

But there was that bluegrass band. And the flowers. And the decor. And the photographers. And the alabaster light bulbs gleaming on a firecracker string that spanned the walls like an electric day-glo spider web. Oh, and the people in their dozens, sitting at set tables, applauding two handsome, young men in nearly identical blue suits who raised their clasped hands at the front of the love-sized room.

So it wasn’t any other brunch in Minneapolis, after all. It was a wedding; it was their wedding.

They were (and are) Michael Abata and Joel Dumonsau, and these are their adventures in matrimony. “We wanted a celebration that was easy, relaxed, and fun,” Michael says, “so we thought to ourselves, brunch!”  This decision would prove to be a deceptively tall order, mixing formality and informality, tradition and innovation, baked goods and wedding bells. 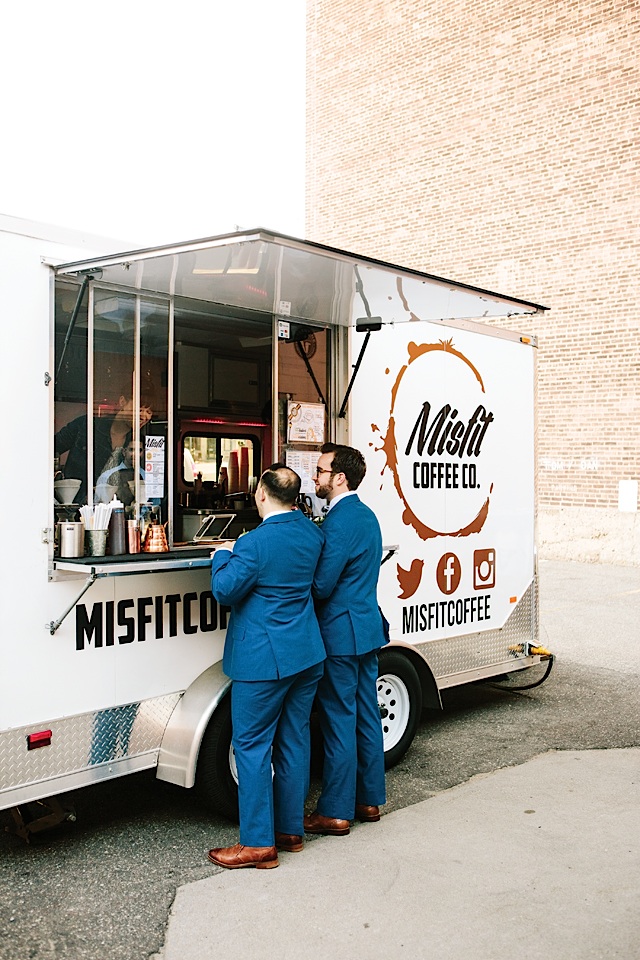 It all started with another encounter that was easy, relaxed, and fun: the couple’s initial commingling, itself precipitated via app. “Our first date was at Muddy Waters on a Monday after work in early October 2014,” remembers Michael. “It was supposed to be just one drink, but three drinks later, we knew we had something special. We connected on so many levels.”

That multilevel connection could have melted in the heat of subsequent personal travails, but instead, it was tempered. “We went through several personal rough patches,” says Michael, reliving the time when the two men were an official couple. “Knowing we could get through just about anything together, as a team, solidified our connection with each other. Our relationship was always so easy. It was the first time I felt truly comfortable dating another person.”

After 16 months, the relationship was ready for permanence. Fortunately, the United States Supreme Court was just catching up with Michael and Joel. “We were together in 2015 when SCOTUS declared marriage equality the law of the land,” Michael says. “It was a very exciting day for both of us! But neither of us are very impulsive, so we didn’t run to the courthouse or book a flight to Vegas. Joel had worked on the marriage campaigns in Minnesota, so the concept of a gay couple being married definitely wasn’t foreign or new.” 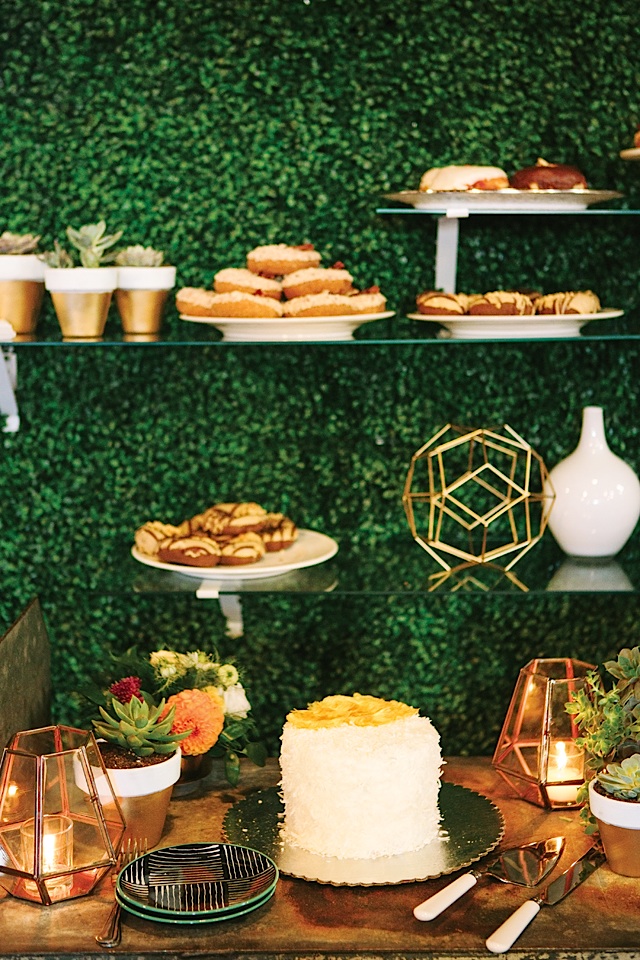 Despite their ecstasy at its legalization, marriage was an institution that both prospective grooms took seriously, soberly. Joel observes, “I think that marriage is a stabilizing and normalizing force, so I was always attracted to the idea of being married to someone as opposed to a domestic partnership, civil union, or whatever.”

The course toward marriage was clear, but before a wedding could take place, it had to be preceded by a proposal…and a proposal for a timeless, time-tested commitment invited a timeless, time-tested backdrop.  Michael reminisces, “I proposed to Joel in Joshua Tree National Park just outside of Palm Springs, California, in mid-February when we were on a getaway with friends.”

Interestingly, the proposal represented a kind of preemptive strike. Michael had the big ask planned for a few months. “After a morning hike in the park, we found ourselves on this expansive overlook with the beautiful Joshua trees and rolling rock formations behind us. I was so nervous I faked a leg injury to get down on my knee. Luckily, our friends were prepared with cameras when I asked Joel. It was a pretty magical moment!”

Transferring the magic of that moment to a wedding ceremony proved a formidable task. “We gave our wedding stylists a lot of inspiration from our engagement in Palm Springs, but not too many specifics in planning decor and floral, so it was hard to have a really specific vision in our heads,” recalls Michael, as the idea of marrying brunch to marriage came into focus. “As we were planning and telling people about our idea, it got both our friends and ourselves really excited.” 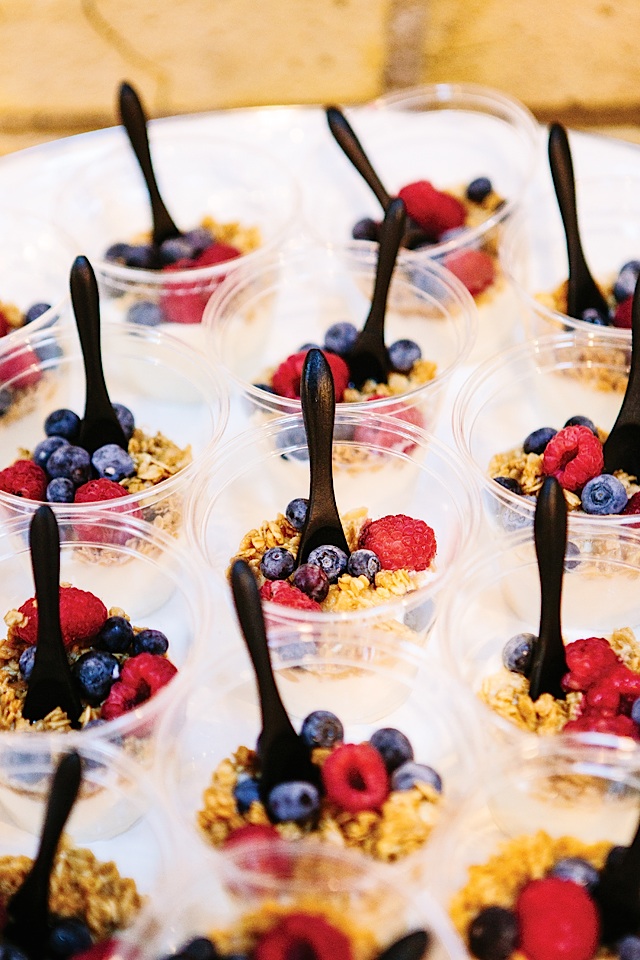 That excitement proved contagious. “Our families were eager to help and support us in any way they could,” says Michael. “Many of our family and friends participated in our wedding ceremony and helped us prep for the celebration.”

This prep assumed a myriad of forms, including a kind of reconnaissance. “Attending a few weddings also helped us determine what we liked and what we could do without, so we planned our wedding with only things we liked,” Michael asserts. “For us, it was all about throwing a fabulous party for family and friends versus having a formal or traditional wedding ceremony.”

Whether it was a ceremony or a party, formal or traditional, the celebration’s impending fabulousness catalyzed the extant work. Foreshadowing their impending union, the two men split party-producing duties, according to their individual strengths. “Both of us had a lot of experience planning events in former jobs, so we were so excited to plan our own big event,” says Michael. “I took on the decor, invitations, music, and photography. Joel managed the venue selection, catering, budgeting, hotel block, and making sure everything got done. It was a match made in wedding-planning heaven. We each got to plan our favorite parts and it all came together for a really fun day.”

When that really fun day arrived, it was accompanied by a natural nervousness that quickly proved unfounded.  “When we arrived that morning, we were floored with how gorgeously everything came together!” enthuses Michael. “The day ended up being exactly what we wanted: just a big celebration with friends and family that felt both relaxed and welcoming to all.” 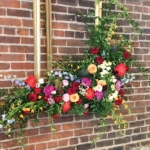 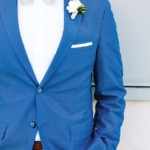 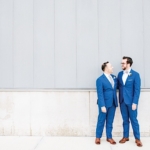 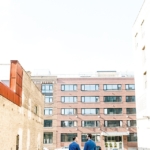 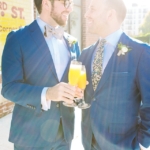 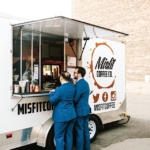 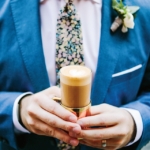 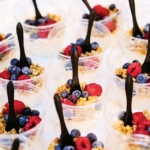 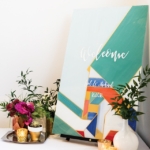 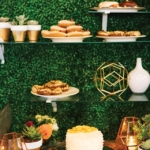 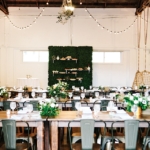 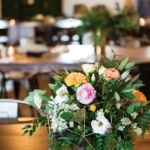