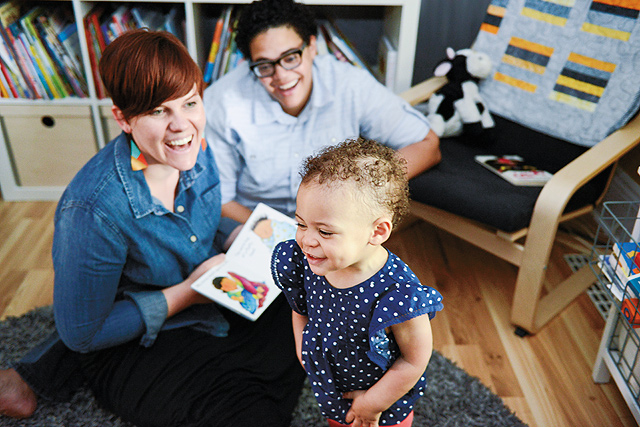 Sometimes, mothers do know best. In the case of Kaja Martinson (32) and Betsy Hawes (33), the intuition of their mothers even led them to love. As coworkers, Betsy’s mother and Kaja’s mother bonded over the fact that they both have gay daughters. Like many mothers wanting the best for their children, they played the role of matchmaker and suggested a meeting. Though it sounds like the beginning of a romantic comedy that could very quickly go wrong, Kaja and Betsy fell in love and decided to create a future—all thanks to the help of their meddling mothers.

When they met in 2005, Kaja and Betsy realized they had quite a bit in common. Both women were educators who knew they wanted families, and their similar values made the idea of starting a family together feasible. Kaja and Betsy also found their senses of humor were complementary. Kaja notes, “Betsy and I have always laughed a lot together, and I think she is hilarious.” Betsy adds, “She makes me laugh in really unexpected ways.” With their similar principles and their shared joy, the relationship flourished between the two women.

After three years of dating, it became apparent to both women that this relationship was the real thing. Betsy decided to take the next step. In the summer of 2008, Betsy planned some special “Minneapolis surprises” for Kaja, culminating at a Twins game, much to the delight of avid fan Kaja. Just before the game, Betsy proposed. She recalls, “It was just us, and it was a good day!” A good day, indeed, for Kaja enthusiastically agreed to the proposal.

In 2009, Betsy and Kaja got married at Gale Woods Farm. They created their dream wedding by incorporating important family traditions and stories. Friends and family members brought their favorite dishes to the wedding, and a recipe book for all the dishes was compiled for all the guests to remember the special day. Betsy adds, “It was a great night with all our family and friends, and in a beautiful place. We had such a blast!” 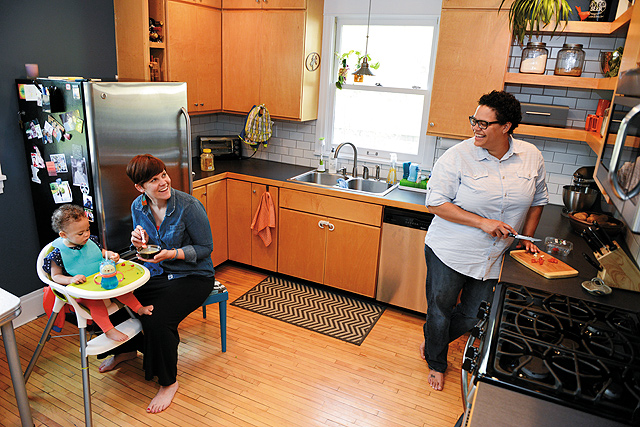 The couple took a road trip to Massachusetts for their honeymoon in 2010 to legally marry. Kaja notes, “This was the perfect culmination of our wedding process, beginning with a symbolic celebration with our family and friends, and ending with a legal ceremony in a city known for fighting for equal rights for all.”

Though marriage equality is now a reality, Kaja and Betsy tied the knot when there were only three states that allowed same-sex marriages. Kaja recalls a story her father-in-law shared when they got married, “When he married his wife, it was illegal in thirteen states for them to enter into an interracial marriage, and now the challenge of our times is marriage equality.”

Once they were married, Kaja and Betsy knew they wanted to have a family. They started planning in 2011 by creating a timeline and evaluating their options. Together, they found a cryobank online and chose an anonymous sperm donor (Cryogenic Laboratories, Inc., www.cryolab.com). With the help of Betsy’s sister, Emily (an Ob/Gyn doctor), Betsy was artificially inseminated and became pregnant with Ezra. Betsy adds, “We chose artificial insemination because Kaja and I both wanted to experience what it’s like to carry a child.” In the spring of 2013, Kaja and Betsy welcomed their daughter, Ezra Martinson Hawes, into their family.

As a family, Kaja, Betsy, and Ezra love to spend time outside, especially at the wading pools around Minneapolis. 14-month-old Ezra is currently learning how to walk, and she loves to explore the sidewalk and the neighbors’ stairs. Betsy says Ezra is filthy and thoroughly exhausted by the end of the day, and the three of them then snuggle down with a book, with Ezra turning the pages. Betsy adds, “Parenting is really incredible. We get to watch a human being evolve and learn and grow. Ezra surprises us all the time and is doing new things each day.” Through caring for Ezra, Kaja and Betsy have learned the value of communication, and they’ve learned the importance of being present in every moment. Kaja says, “We love being moms!” 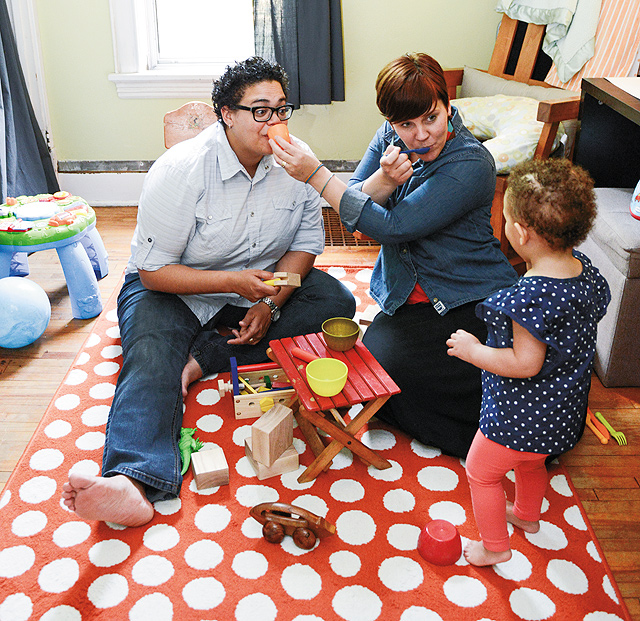 As Kaja and Betsy have discovered the joys of parenting, they also have experienced some of the challenges of GLBT parenting. Kaja notes that most of these challenges were very subtle, and she believes that they stemmed from a lack of awareness. Kaja notes, “When we shared the news that we were expecting, many people made assumptions that I was carrying, when in fact, it was Betsy. As with all interactions, our responses became better the more times it happened.” Kaja also noticed that when “Betsy’s baby bump began to show more, many people congratulated her, but did not congratulate me.” These subtle situations made Kaja and Betsy more aware of the assumptions they made about other families.

Kaja and Betsy rely strongly on their community of GLBT parents, using this group to source doctors, lawyers, and cryobanks who are welcoming and inclusive to all families. In addition to being able to get advice from same-sex families, their friends are able to provide support and camaraderie. Kaja says, “It’s exciting to be part of this community. We are not alone in this journey.” Betsy notes, “It’s invaluable to us to be surrounded by people who truly understand how we feel.” Kaja adds, “Since Ezra was born—as a family—we have experienced only love and acceptance from our community; however, we recognize that this is not the case for all GLBT families. We feel very fortunate.”

As Minnesota (and slowly, the nation) settles into the reality of marriage equality, more and more GLBT families are popping up out of the woodwork. Kaja says, “Five years ago, at the Pride festival, there were very few families with young children. Last year, there were children everywhere!” The Minnesota GLBT community is embracing the increasing the number of GLBT families by holding family-friendly events throughout the year. These events allow families to network and exchange resources as well as meet others who are navigating the exciting (and simultaneously stressful) waters of same-sex parenting. Betsy encourages people who are starting a family to ask questions; the GLBT parenting community is more than willing to help “wade through the confusion.”

Even after their marriage was finally legally recognized in Minnesota, the Freedom to Marry Act has a continued impact on the lives of Kaja and Betsy. In addition to finally receiving legal recognition, Kaja and Betsy will now both be recognized as legal parents of their future child, which Kaja intends to carry. (Since Ezra was born before August 1, 2013, Kaja must go through the full adoption process to be considered Ezra’s mother.) They will not have to adopt any future children; Kaja feels the marriage equality law “validates that our family matters.” 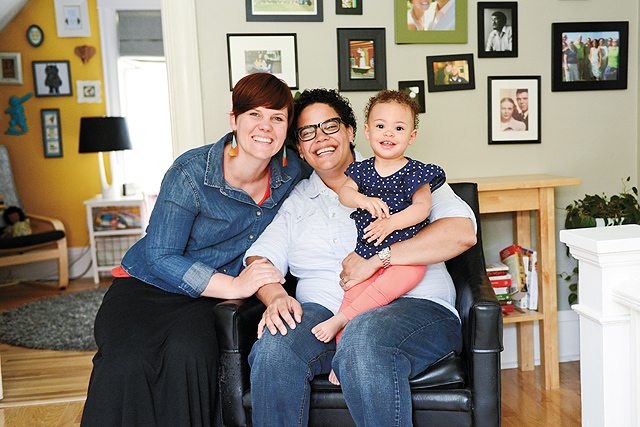 As this family continues to grow in the future, Kaja and Betsy are fortunate to have their strong relationship to lean on. Kaja appreciates how Betsy balances her out, and cherishes their great conversations. “She is the perfect wife for me in so many ways,” Kaja adds. Betsy respects how Kaja strongly speaks her mind, and knows that Kaja will continue to be a great mother to Ezra and their future children. Kaja and Betsy will undoubtedly impart double the amount of motherly wisdom to their children, and their children will grow to learn that moms do know best, and having two potentially meddling mothers is a very special gift, indeed.