Of History and Religion: Raise Your Voice 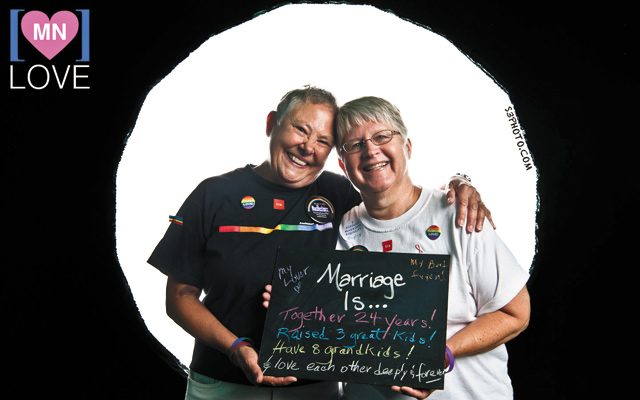 As we approach on the ballot measure in November 2012, we will begin to hear “Christian” voices in support of a constitutional amendment against same-sex marriage.  These voices seem inescapable and indefatigable.  Yet, as an openly partnered queer woman and a student at Luther Seminary pursuing ordination, I know that these are not the only voices rising up in the church today.

As a result of many brave men and women who have gone before me, I am able to be a candidate for ordination in the Evangelical Lutheran Church of America.  After nearly twenty years of discussion, the ELCA voted in the summer of 2009 to allow individual churches and regions, as they felt moved, to call pastors in “publicly accountable lifelong monogamous same-gender relationships.”  Other “mainline Protestant” denominations — specifically Episcopal, United Church of Christ, and Presbyterian — have been through similar processes to remove barriers to the ordination of gay and lesbian people.  (The largest mainline Protestant denomination, the United Methodist Church, does not allow the ordination of openly gay and lesbian pastors, and has also been discussing the issue for some time.)

There is still a great deal of struggle in the church, even after the policy transformations that have taken place.  Many people and pastors cannot (or will not) understand what has happened and have elected to leave their particular churches or denominations.  Debate continues — and not always civilly.  Yet there is also a great deal of celebration.  Many people and pastors are coming forward to rejoice in the long-awaited recognition of partnered gay and lesbian people as children of God, loved and accepted unconditionally.  My partner and I, the congregation where we worship, and many of my fellow students at the seminary are among those who daily celebrate how far the church has come.

We have not come this far by votes and debates alone.  We are where we are today because of the courage of people throughout the church who raised voices and questions that challenged and strengthened us.

Some of those voices raised the question of biblical authority.  For much of the church’s history, we treated the Bible as a book with a single author (usually God), which spoke to us plainly no matter where we were in space or time.  It is in recent centuries that academics and scholars in the church have awoken us to how far we are from the original setting of the Bible — culturally, geographically, racially, historically, even religiously.  What came to be called “historical criticism” attempted to reconstruct the context in which the books — plural — of the Bible came to be.  For many, understanding the teaching of the books — plural — of the Bible in their first context brought the lessons in those books into greater clarity.  The creation stories became not a scientific and historical record but songs of praise to the beautiful work of God’s hand.  The laws and commandments given in Exodus, Numbers, Leviticus, and Deuteronomy became not a way to cast out the “unclean” but a collection of guidelines for keeping a community “clean”, set apart from other religions who worship other gods.  Matthew, Mark, Luke, and John became not four voices to the same story, but four authors of four distinct stories offering different windows on the person of Jesus Christ.  For many, historical criticism brought the Bible from an untouchable and condemning pedestal into our own hands where the stories of struggling to know what it means to be “God’s people” became a living and nourishing witness to our own story.

Some of those questions came from the perspective of the oppressed.  In the twentieth century, national and global voices raised questions about institutional oppression within the hierarchy of the church.  Social injustice and the inequality, poverty, and cruelty it sowed was challenged.  No, said voices from colonized countries in South America, Africa, and Asia; No, said voices of African-American and Latino-American church leaders; No, said voices of women across the church.  A Savior born to a working-class family, who ministered to fishermen and spoke about farms, who died at the hands of religious authorities and political regimes — this Savior did not come to establish a church of injustice.  From these perspectives grew liberation theologies and feminist theologies, speaking from and for the perspective of the oppressed, looking to Christ not only to save us from our individual sin but from the institutional sin that bound us to hurt and oppress one another.

But the most important questions came from the witness of ordinary people.  This has been the biggest challenge to the church:  when its children, baptized and raised and loved by many, step forward and speak their truth.  The bold witness of the queer children of God has been the transformation of the church.  Each church, both individual congregations and gathered denominations, has wrestled with these beloved children, the Sunday School teachers and secretaries and musicians and potluck coordinators who stepped forward and said:  “This is who I am.”  Each church has asked:  “How do we hear this witness, the voices of the people we love speaking out against hate?  How do we understand the experience of our queer brothers and sisters in the face of years of tradition?”

We still have a long way to go, and there are days and weeks when we are weary of the journey.  When our voices of celebration are mixed with voices of condemnation, when two sets of hands open the same holy Book and see two very different images of God, it may seem that we have not come very far at all.  The constitutional amendment looms before us, and varied voices from the church rise up.  Our own voices are strained after years and decades of calling for justice, for equality, for the right to the pursuit of happiness.  And it has been those voices, weary and worn, that have changed the church.  It is the bold witness of the queer children of God, their proclamation of the truth of God’s love for them, that has brought us here, to this place, where we might be able to dream of a world where despair can be conquered by hope, where lies can be consumed by truth, where hate can be overcome by love.