They were called female impersonators, character types, lovely creatures, drag queens, pansies, divas. They were straight, bi, gay and queer. For over a century, hundreds of men used the all-male bastion of the Philadelphia Mummers’ New Year’s Day Parade to create a space in which they could publicly defy expectations about gender.

Philadelphia’s Mummers traditions date back at least to the early 19th century, when bands of outrageously dressed men would roam the city making noise, creating havoc and shooting off guns to welcome in the New Year. From its beginnings, the traditionally all-male Mummers’ or “New Years Shooters'” spectacle turned convention on its head by lampooning local politicians, caricaturing ethnic types and by including some of its participants in female clothing.

“Much amusement was created by a shooter who was so dressed as to make it impossible to believe that he was not a woman. A green sating gown with a train, the whole embroidered with pink roses, was set off by a white parasol, plenty of face powder and a coquettish smile, which went straight to the hearts of those whom she — rather he — looked upon with favor.” 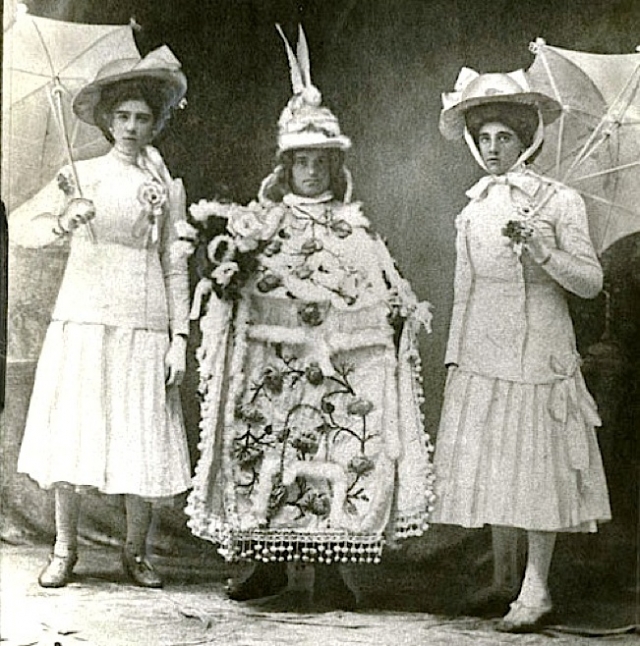 When the city officially began sponsoring the Mummers’ New Year’s Day Parade in 1901, among the categories it awarded cash prizes for was “Best Female Impersonator,” sometimes called “Character Type.” It’s important to note that this was a serious and prestigious prize; the award was in the Fancy Divisions category and not the Comic. The comic “wench” costume was a later invention, whose grotesqueness and exaggeration only had the opposite effect of the “character type” of playing up the awkward masculinity of the wearer. Many participants competed year after year, creating spectacular costumes to earn that prize for their club. South Philadelphian Frank Carter, for instance, represented the Passyunk Club every year from 1909-28, almost always winning first or second place. The newspaper photos of the era show Frank to be a diva force to be reckoned with. 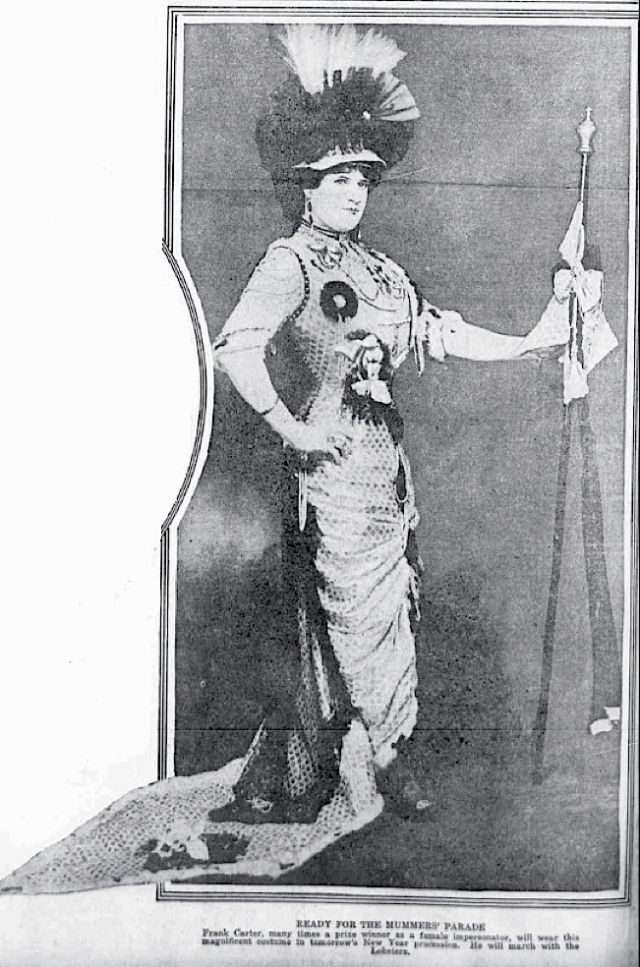 Through the decades, competitors were impeccably dressed in the height of current fashion: the tight hobble skirts of 1914, the elaborate Ziegfeld Follies headdresses of the 1920s and the glamorous movie gowns of the 1930s. By 1933, as what was called “the pansy craze” in entertainment swept America, there were so many “female impersonators” in the parade that at least one writer, astonished at the sea of gowns and peacock feathers, equated “drag” as he called it, with homosexuality. In his book “Strange Loves,” La Forest Potter wrote “the strangest feature of the matter is that, for quite a number of years, the first prize has always gone to a ‘fairy,’ made up as a woman and dressed in the gorgeous gown of a woman. The most exquisitely designed costume in the entire parade was conceived, designed and worn — by a male designer, whose real vocation was that of an interior decorator.” 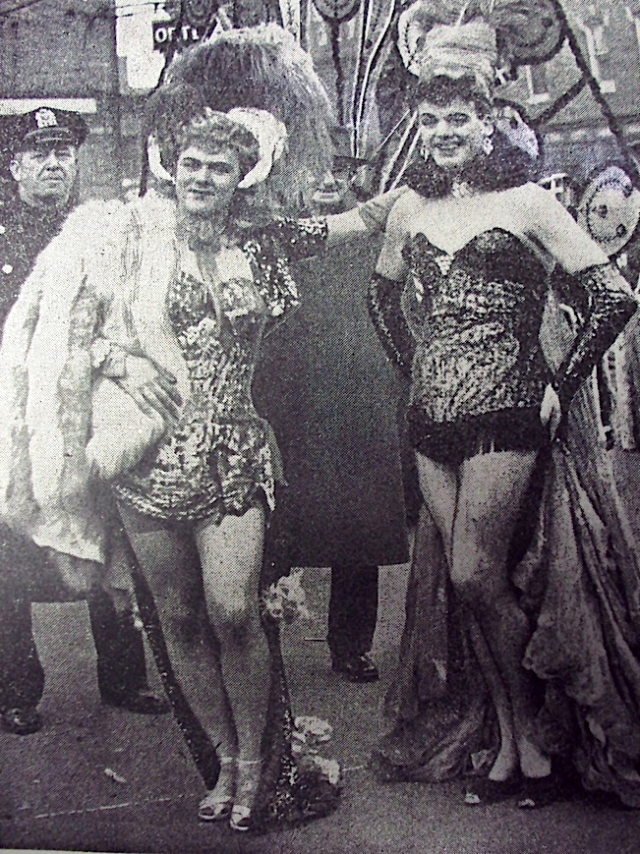 Through the 1930s, ’40s and ’50s, the Mummers’ parades drew hundreds of competitors each year from New York City, Washington, D.C. and Boston, who flocked to Philadelphia to show off their finery on Broad Street, creating a highly visible gender-variant contingent in an already- colorful extravaganza.

The Mummers began including women in the parade in the late 1970s, just about the same time the Trilby String Band mounted a Parade production called “Las Vegas on Broadway” featuring several local diva impersonators. A few years later, in 1984, Trilby presented “La Cage aux Folles,” a tribute to the gay-themed Broadway show of the same name. Philadelphia Gay News carried a story about the openly gay Philadelphians who took part in the show, calling them “Our Boys in the Band.” 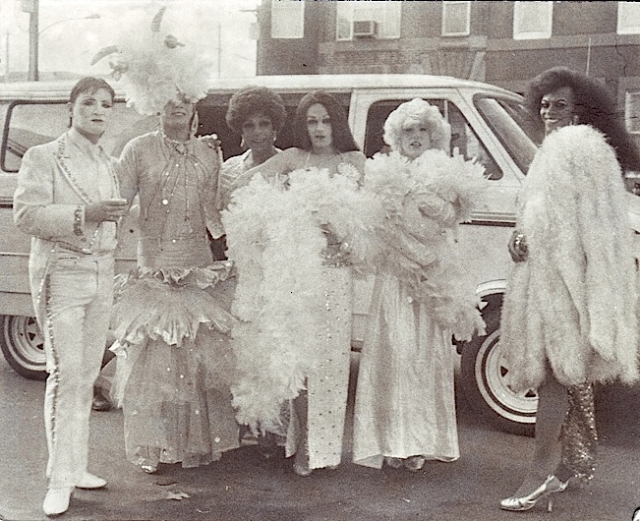 The number of female impersonators in the parade began to wane in the early 1990s and nearly disappeared for 20 years. In 2013, the Mummers’ Association invited Brittany Lynn and her Drag Mafia to participate. Brittany’s high-heeled and sequined presence has revived a long and venerable tradition going back to the 19th century.

There’s much research to be done on those early gender-variant pioneers, and many questions to be answered. Who were these men who spent so much time and energy each year to compete? What drove them to participate year after year? Did their interest in female clothing go beyond this once-a-year spectacle? Did some of them identify as female? How were they viewed by their fellow Mummers, the press and the general public? Importantly, did they feel connected to a self-identified gender-variant community in Philadelphia?

It’s evident that their artful, theatrical performances made it possible for audience members of that community who lined the streets to be more visible and to feel included in the spectacle. During the 1950s, there were corners on Broad and Locust streets where the “queers” congregated to watch. For one day a year in Philadelphia, being different was something to be celebrated.

Bob Skiba, a Philadelphia tour guide for 14 years, is president of the Association of Philadelphia Tour Guides and archivist at William Way LGBT Community Center. He co-authored “Lost Philadelphia” in 2013.