Name Change: From Hers to Hers 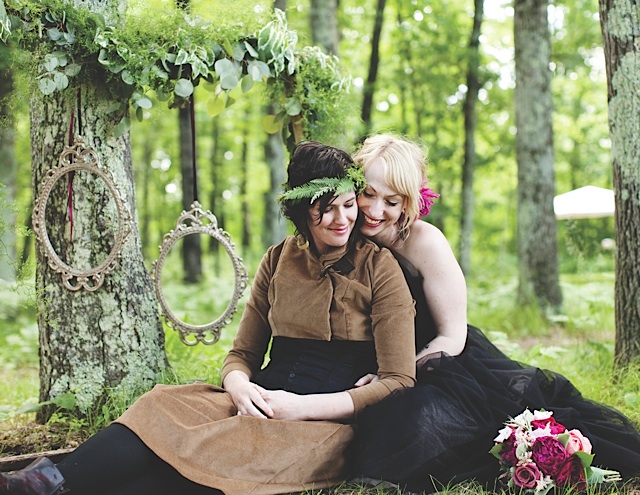 Jesse’s Perspective on Changing Her Name:

When we decided to get married, the last name conversation inevitably surfaced. In the back of my mind, I was always thinking “hyphen.”  I imagined our last name to be Miller-Newquist. But the more I thought about it, the more I wanted to explore all of the options. It really came down to four choices: her last name (Newquist), my last name (Miller), the hyphenated Miller-Newquist, or a combo name, a new frontier—Millquist or Newler or Newquiller.

The combo name was the first to go. Firstly, they all sounded absurd. Secondly, we are both somewhat traditional and didn’t want to sever our personal genealogies. My last name went next. Although I never intended to lose my last name, I didn’t feel an affinity toward it. It came down to Alyson’s last name or the hyphenated last name.

I wanted our name to represent us as a family and knew Alyson needed to create new Newquists after losing both her parents in the prior five years.  That, combined with the recognition that our marriage would not be legally recognized, weighed heavily on both my decision and my comfort level with said decision.  We want to be a family unit, and the reality is that being denied the right to legally marry influenced my decision to legally change my name.  I’m not certain that if we could legally marry I would have made the same decision.

The decision to become a Newquist quickly became the easiest piece of an incredibly long and frustrating process.  As I ventured down the path of changing my name, I completely underestimated the amount of time, paperwork, and money it was going to take. In order to change your name, you have to prove that you are not a criminal, which is understandable except for the fact that when your marriage is legal you don’t have to prove anything.  You just pay $135 and can change your name and be married.

After you apply for a court date to change your name, you have to compile a list of documents that includes your criminal background histories from each state you have lived in since you turned 18. For me, that was three states: Florida, New York, and Minnesota. To make this obstacle course slightly more complicated, each state has its own absolutely fascinating process. It turns out that in Florida, anyone can request a person’s criminal background for a small fee of $24—no fingerprints needed as long as you have a social security number. New York, on the other hand, was not surprisingly twice the price and twice as strict. I had to email them my address so they could mail me the application along with their own state fingerprint card. I then had to figure out where one goes to get their fingerprints.  The police station? After a quick search, I found out the best place to go was the Bureau of Criminal Apprehension (like something out of a neo-futuristic movie or an Ayn Rand novel).  Conveniently, I had to go there anyway to get a copy of my criminal history from Minnesota.

Minnesota ended up being the simplest process because everything was digital. I simply put my index finger into a scanner, and in less than two minutes, I had a copy of my criminal background history. I then had to bring two witnesses who had known me for over a year that would vouch for my identity in addition to my multi-state proof that I am not a criminal and my two photo IDs.

After gathering all of my documents and my two witnesses, I went to court. Going to court was positively the most terrifying piece for me. It made me feel like a criminal, and it made me angry that I had to go to a place to literally be judged for wanting the same last name as the person I love.

To make it more intense, I said to Alyson, “I don’t know yet what I am going to say when they ask me why I want to change my name.” She responded quickly and emphatically, “Something profound.” No pressure.

As I sat in the empty courtroom waiting for the judge, I couldn’t help but feel clammy. Panicky thoughts consumed me. What if he or she says “no?” Can they say “no?” That can’t be an option. Can it? Suddenly the door behind the chamber opened. My eyes popped. In walked an attractive, clearly gay man who said, “Okay, I’ve never done this before so I have to figure this machine out.” The nervousness scurried out of my body. Everything was going to be just fine.   Thirty minutes later I became a Newquist for the rest of my life—because I sure as hell am not going through that process again.  At the same time though, in all seriousness, I really can’t imagine having it any other way because I LOVE having the same last name.

Due to a combination of female births, traditional marriage, and premature deaths, I am the last Newquist in my family.  Until I moved to Minnesota, I thought my last name was unique and only knew of a few other Newquist clans via a narcissistic Google alert a few years back and the angry lady named Ann whose email was one letter off mine for years and clearly felt no last-name allegiance to me when grumpily forwarding my thrice-a-year misdirected emails.

I never imagined changing my name upon marriage for this reason, and I always assumed I would just have two last names if I got married.  It often sincerely shocked me when my friends from high school would take their husbands’ names—particularly the more boring ones.  I always thought that the male partners of my friends from high school, my brother-in-law, and straight dudes in general who put pressure on their wives to change their last names and give up their former identities were being chauvinistic and frankly, a bit Neolithic.  I understood the argument to want to have one family name and to be a family unit once children were in the picture, but it seemed like it could be less one-sided.  My wife Jesse’s decision to take my last name changed how I feel about this.  It makes me feel so proud and thankful that she would disrupt her identity in order to be one clan.  It also makes me consider how much pride is wrapped up in the norm for a woman to change her name and how little gratitude is shown culturally for women to do this.  It is a big effin’ deal, and it deserves a bit more respect.

Jesse and I sharing the same last name makes me feel more like we are married legally than anything else we have done to legally solidify our marriage.  It is an outward representation of one-ness to the world, which for a non-legally married couple, means the world to me.  And seeing as I would not have felt comfortable changing my last name, I am so grateful to Jesse for making this decision and going through the lengthy process of changing her name.   It’s also fascinating to watch people’s reactions to our decision, particularly within the queer and queer-friendly community.  Sometimes the straight community is so much more accepting of things like marriage, wedding norms, and taking each other’s names, because they are used to it.  In the gay community, so much is tied up in gender identity and roles, particularly in the lesbian community.  My wife is far more masculine than I am, and she took the last name of a dress-wearer who is never-without heels and lipstick. It makes me so happy to be married to such an unselfish person who is willing to change her last name and then volunteer to be the baby carrier in the family so we can make even more Newquists.

As a wedding planner, I am around marriage constantly.  My clients are (for the most part) super progressive individuals who believe in marriage equality on the macro and micro level, both in society and within their own marriages.  My last couple, a lovely couple named Chelsea and Zac, even read from the MA Supreme Court case that legalized same-sex marriage in that state during their ceremony.  They then took each other’s names.   I had been wondering for some time if a male marrying a female was allowed to legally change his name on a marriage certificate, and Zac informed me that all he had to do was fill it out.  It cost us upwards of $500, a morning of missed work going to court, and multiple background checks for Jesse to change her name to mine.  This is just another one of the very real economic costs and inequalities stemming from the lack of marriage parity at the state and federal level.  I am glad to have this story to tell and share with others, though, as a concrete example of why we must keep getting married and changing our names (or not changing them) and making ourselves visible as married couples.