Old, stereotypical joke: What do big, butch, tough leathermen talk about at the leather bar? They exchange recipes. 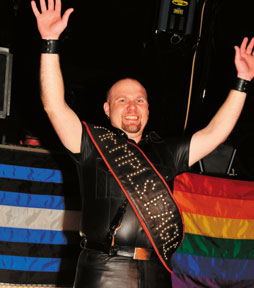 In that spirit, here’s a recipe for a particularly tasty concoction: the 10th edition of the Mr. Minneapolis Eagle Contest on April 11 at the Bolt Underground.

2. Add a large, enthusiastic audience and a well-seasoned master of ceremonies (Brian Anderson—this was his fifth time emceeing the contest). Turn heat to high, as contestants compete onstage in Keg Walk, Speech/Q&A, and Truth-or-Dare contest segments.