Every year, the International Mr. Leather (IML) Contest over Memorial Day Weekend draws more than 50 contestants from across the United States and Canada as well as around the world. 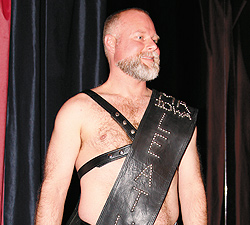 Where do they all come from?

Most, if not all, IML contenders move on to Chicago as winners of local, state, or regional contests.

This year, as in years past, one of those contenders will travel to Chicago from Iowa. The Mr. Iowa Leather Contest is a coproduction of The Blazing Saddle, a bar serving Des Moines for 25 years, and the Corn Haulers Leather and Levi Club of Iowa, which has been around for 32 years. This year’s contest took place Friday-Sunday, February 13-15, at The Blazing Saddle.

Your humble columnist was part of a group of Twin Cities leathermen who traveled over Valentine’s Weekend to attend the contest, and to visit our leather brothers in Iowa.

The weekend got under way with Friday evening’s Judges & Contestant Mixer.

The next portion of the contest started Saturday afternoon, when the judges interviewed each contestant privately. Contestants were Frank Platt of Des Moines; Shawne Goodman of Ames, Iowa; and Greg Mace of Des Moines. They were queried by an impressive lineup of five judges. Two of them were local: Mike Ferry, Corn Haulers Vice President; and Dan Bell, Corn Haulers associate member. The other three were current or former IML titleholders who traveled to Des Moines from one coast or the other: Mike Gerle, IML 2007; Mark “Sir Y” Burton, International Mr. Deaf Leather 2008; and Gary Iriza, current IML.

Saturday evening’s contest and show played to a completely packed house at The Blazing Saddle. The fast-paced night started with a fierce production number by three young leathermen. Next, all three contestants were introduced, and then brought back onstage one by one for the Minimal Wear and Formal Leather/Speech categories.

Drag performers Iris Aspire, Stinketta, and Lana Caine (who was also the evening’s emcee) provided entertainment between competition segments. Stinketta enlisted Iriza’s presence onstage for two numbers, while Caine was assisted in one of her numbers by a blindfolded member of the Minnesota contingent.

Finally, the contestants returned to the stage, and the winners were announced: Greg Mace was sashed as Mr. Iowa Leather 2009, with Shawne Goodman taking runner-up honors. As the new Mr. Iowa Leather, Mace will be competing in the upcoming IML Contest in Chicago May 21-25.

During Sunday’s victory brunch at The Blazing Saddle (great food, delectable home-baked breads and pastries), I had the opportunity to talk to Mace.

Kudos to The Blazing Saddle owner Bob “Mongo” Eikleberry and manager Bryan Smith (aka Stinketta), as well as to all the Corn Haulers members who keep this contest going, and who made this year’s edition such a great experience.

Mr. Minneapolis Eagle Contest Is Back

After having such a great time at the Mr. Iowa Leather Contest, it was very good to hear the news that the Mr. Minneapolis Eagle Contest is back on April 11 after a year’s hiatus. There’s still room for more contestants, so if you’re interested in competing, contact the bar for a contestant application. If you win, you’ll travel to Chicago to compete alongside Mr. Iowa Leather 2009, Greg Mace, and about 50 other leathermen in the International Mr. Leather Contest over Memorial Day Weekend, May 21-25. Even if you aren’t competing locally, be sure to stop by The Minneapolis Eagle April 11 to cheer on your favorite contestant.