Moving Up and Coming Out 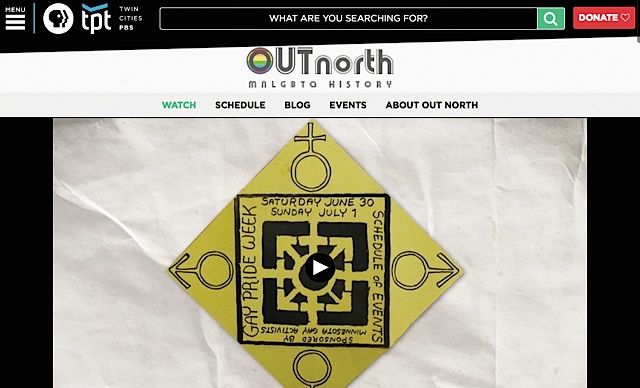 Today, a stroll through the many neighborhoods of Minneapolis will take you past a plethora of gay bars, gay clubs, and other popular hangout spots. However, that walk would have been a lot different—and a lot less gay—in the early- to mid-’70s.

Out North: MNLGBTQ History is a documentary coming to TPT that captures the vast differences between opportunities around Minnesota for the community from past to present. Out North presents the unfamiliar history of our familiar neighbors, friends and family members with different experiences in the community.

Out North also looks at important events throughout history including the Stonewall riot, known as the first shot in the Gay Revolution. Also, the documentary shows Minnesota’s first steps toward making the state an inclusive place with the founding of FREE, one of the first college organizations in the nation for the community.

Although Pride celebrations are a welcome sight around the Twin Cities, they once were a rarity, surrounded by hate, harassment, and blatant danger for the community. Out North differentiates between Pride celebrations that once had to be held in private with discretion to the out-in-the-open celebrations today that fill the streets with joy and love.

The documentary tells the story of lesbian entrepreneur Honey Harald whose mission was to keep a women’s establishment open in Saint Paul for three decades, a task that was once nearly impossible in a world where community members were shamed for loving who they love.

Because the common narrative throughout history has frequently featured gay white men, Out North features new stories from the Native American Two Spirit experience and histories of other queer communities of color.

Out North presents the unique, sometimes disturbing history of Minnesota’s GLBT community through peeks into the lives of pioneers. How did Minneapolis’ array of bars, clubs, and hangouts come to be? Well, thanks to this documentary, we know it wasn’t easy.