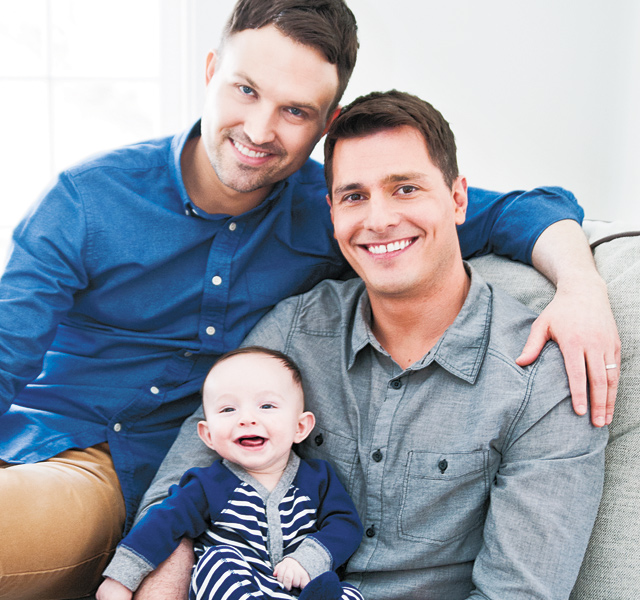 Chris and Anders met while living in the same neighborhood by the University of Minnesota. Anders, in his first year of medical school, and Chris, studying for the LSAT exam, spent many hours hitting the books at the same Dunn Bros Coffee on University Avenue. When not stealing glances at each other across the coffee shop, they crossed paths while running on the Stone Arch Bridge, and again at Bobino, the wine bar where Chris worked. Eventually, after having bumped into one another numerous times, Chris asked Anders—whom Chris describes as “quieter and less extroverted”—for an ice cream date at Izzy’s in St. Paul.

A few years later, the two were still dating, had graduated, and were establishing careers. “Anders did a fellowship at the University of Vermont and we bought a cabin outside of Stowe with the idea of eventually moving out there,” Chris says. “That didn’t happen because my career took off in Minnesota and because the real estate bubble burst at about the same time.” Stuck with two mortgages and student loans, Anders spent two years out in Vermont with the couple’s dog, Ursa, and Chris commuted between Minnesota and Vermont for visits.

“After two years, Anders moved back and took an endocrinology position at HealthPartners and we bought a house in Prospect Park,” Chris says, while continuing to occasionally spend time in Vermont.

They had talked about getting married for years but had never really gotten to it, so Chris took the opportunity to surprise Anders with a wedding one weekend in Vermont, where same-sex marriage has been legal since 2009. “Throwing a surprise wedding meant stealing his driver’s license and taking it with me so I could get the [marriage] license ahead of time, finding an officiant, and getting some rings after guessing his size.”

When the couple woke up that Saturday morning, Anders asked over coffee what they were going to do that day. Chris’s answer? They were getting married. He says, “It was just us, in our sunny backyard with the mountains in the background. It was simple and stress free and fun.”

And life went on, just as it does with every couple after the wedding. Anders is an endocrinologist and Chris is an employment lawyer, now for Baillon Thome Jozwiak & Wanta in Minneapolis. What came next? Chris says, “Anders and I were never those people who have this visceral drive to have kids, no matter what.” But, the couple began talking about the prospect of children seriously after being together for ten years. “Our thought was always, if this can work somehow for us then we want to do it but we’re not going to force it,” Chris added. “We liked our life as a small family of me and him and our dog and we were okay with it staying that way, but we hoped it could also involve a little person or two if there was a way we could do it.”

As a same-sex couple, Chris and Anders had to answer the question, “How are we going to do this?” With close friends who had adopted, the two started exploring that path—even doing an interview with Children’s Home Society of Minnesota and writing out a profile to be shown to expectant mothers who are looking for adoptive parents. But, during that summer of 2012, a conversation developed with friends of theirs who were also a same-sex couple and considering having a family.

The two women had been close to Chris and Anders for years. “We acknowledged our mutual needs and interests and just talked openly about what it would be like—physically, financially, and emotionally—if we did a gamete swap,” Chris says. In this case, the conversation continued for a while and the two couples agreed to swap sperm for eggs—twice—resulting in two distinct sets of sperm and eggs to fuse. One set for Chris and Anders, the other set for the wives.

Chris and Anders were also talking with various friends in Minnesota about their plans and one of those friends, a physician Anders did his residency with at HCMC, called to say that his colleague was interested in meeting them and discussing surrogacy. The physician had overheard her talking about how much she enjoyed pregnancy and that she would be open to being a surrogate.

“Surprised—but excited—by this development, we got together to meet…and it just felt right,” Chris says. The group made plans to do more research into the practicality of the process and all the necessary steps. Following this exploratory research, they sat down to dinner once again to make sure everyone was still on the same page. Spoiler alert: they were. 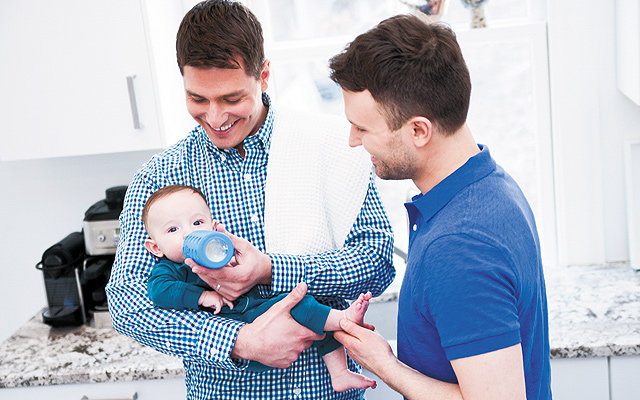 Hugo with his dads, enjoying a bottle of milk provided by their surrogate. Photo by Brett Dorrian

Chris adds, “Those initial meetings were, of course, somewhat awkward because you have to discuss very personal and difficult things with people you are just getting to know. But, for us, that awkwardness quickly faded.”

The two couples became close, with Chris and Anders looking forward to meeting their children. Reflecting on the experience, Chris says, “I remember being worried about what their kids were going to think about their mom being a surrogate to a gay couple. I was nervous about questions that might come up at dinner, but my fears were unfounded. They were respectful and kind and ever since it’s been fun watching them grow up, too.”

With all of the necessary people in place, the next step was finding a fertility clinic. With numerous options, Chris and Anders began meetings with the Center for Reproductive Medicine in the fall of 2012, which managed all of the pre-pregnancy medical matters, such as the medical screening of everyone involved.

Before even beginning the process of getting pregnant, all parties (in this case, all three couples) are required to go through counseling and psychological testing. “This is where we discussed difficult topics like what we would do if there were multiples, birth defects, how we felt about terminating pregnancies, etc.,” Anders says. “And even things like how we were going to handle all this on social media. This was intense, but very reassuring to us since everyone was in agreement.”

Having passed the psychological testing, the couple then had to go through comprehensive STD and infectious disease testing and a physical exam, done through an outside clinic. The egg donor and surrogate (termed “gestational carrier”) are placed on hormones for weeks to align their cycles. In March 2013, after the sperm and egg were donated and then fertilized, the couple sat with the doctor to discuss how many embryos to transfer to the gestational carrier. Anders explains, “More embryos means a higher likelihood one will take, but also increases the risk of multiples and complications. We had one really good-looking embryo so we only transferred one. It can feel like a very clinical process—we have a great picture of him as just a cluster of cells.”

After the transfer, the gestational carrier returned to the clinic for several appointments, ultrasounds, and labs. “Once we safely reached 12 weeks, we were ‘discharged’ from the IVF clinic and started following up with our midwife group,” Anders says. “We then worked on creating our birth plan, which is where you lay out the details of the delivery. We had put into the birth plan that I would deliver him,” which he did, on December 7, 2013.

Following the successful delivery of their son, Hugo, Chris and Anders spent an extra two nights at the hospital. “We are so thankful for that time not only to bond with Hugo, but also to spend time with our surrogate and her husband,” Chris says. “Leaving the hospital was very emotionally difficult. There just isn’t a way to thank someone for doing something so incredibly selfless and generous.”

Anders adds, “We had agreed with the gestational carrier that if it worked out ok, she would pump and freeze breast milk for the first several months. This has been great, not only to get a supply of milk, but also a great reason for us all to get together every few weeks.”

To many, this process can seem long and labor-intensive on everyone’s part, but Chris believes it was the right choice for his family. “Going about baby-making the route we did is, frankly, somewhat overwhelming. It’s a lot of science and a lot of hoops to jump through and there are a lot of things you don’t have control over,” he shares. “That said, in the spectrum of families that go through IVF, we were pretty lucky and things worked well for us. Many couples have complications of some sort along the way and so, even though getting there took a lot of time and was a lot of work and stress, it was all worth it.”

Although Chris jokes they are refusing to think about adding any more children to the family at this point, he says it’s comforting to have supportive families behind them. “It’s brought some of our family closer in a way I wasn’t anticipating. I think that’s understandable but I also find it surprising,” he says. “In our minds, Hugo doesn’t all of the sudden give us legitimacy as a family—we were a family before too.” 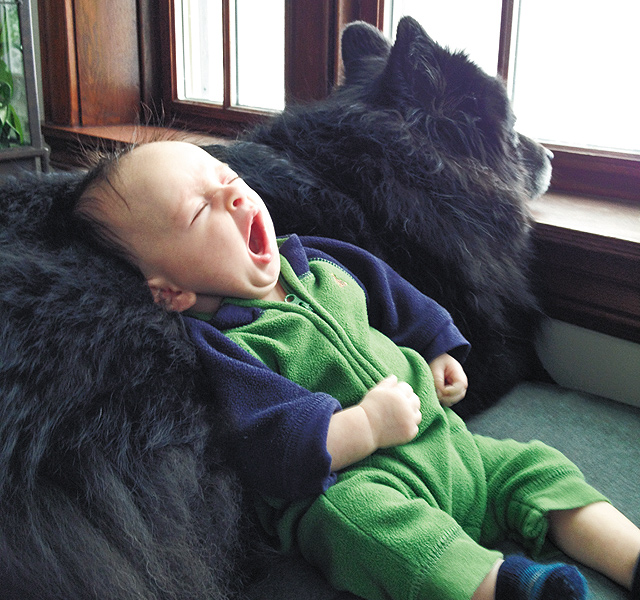 The idea of “family” has changed and been pretty fluid in the history of gay culture. How the GLBT community has defined the word family, and how the government has allowed the community to define it, have undergone drastic changes, especially in recent memory. With the changing laws around marriage equality, adoption, the IVF process, and even smaller things like hospital visitation rights, recognition of the GLBT family has shifted for the better.

“I think one of the most amazing things about gay culture throughout history has been the ability to create our own families and communities after not having the best experiences of acceptance within either our own traditional families or mainstream culture in general,” Chris says. “That resiliency and resourcefulness is something to celebrate and respect, not disregard just because some of us have clawed our way into the mainstream. While it’s hard to claim that Hugo’s life is mainstream—having two dads, an egg mom and her wife, a tummy mom and her husband and children, and a whole collection of characters that love and adore him as their own—I’m simultaneously not about to project what works for us onto other gay and lesbian folks and expect that they’d want those same things.”

They’re aware of at least one other family who did want to do it similarly; their friends, the wives who donated the eggs that resulted in Hugo, are nearing the delivery date of their own baby.

And, thanks to stories like these, other couples have examples to follow, in their entirety or otherwise. 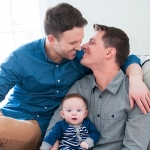 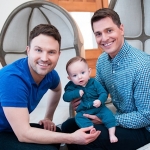 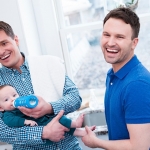 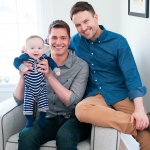 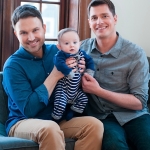 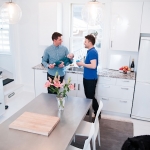