Mary Lambert’s Compassion, From “Same Love” to “Heart On My Sleeve”

“Same Love”: the song that took the airwaves by storm and resulted in a mass wedding (featuring many same-sex couples!) on live TV during a little event known as The Grammys. No one involved in the song expected it to be as big as it was, becoming an anthem of sorts, being taken on as a rally song and used by marriage campaigns across the nation.

The woman behind the catchy chorus, Mary Lambert, says, “I just remember being in the vocal booth and thinking, ‘Wow! This is going to be so good for Washington State and we can pass marriage there’ and that’s where my head was at. It wasn’t anything behind that.”

So how does a Christian slam-poet from Seattle end up on a Billboard-ranking, Grammy-nominated rap song? Turns out, Mary knew the right people. She was invited to participate by a friend of hers whom she had done spoken word with in Seattle. “The spoken word and rap communities are pretty closely related in Seattle,” Lambert says. “The community is very kind to each other and, at that time, I was exploring the dichotomy of being a Christian lesbian and the seemingly contradictory lifestyle in my poetry and the song seemed to release my intention as an artist.”

With recent reports saying that same-sex marriage will soon be legal for 60 percent of the American population, the movement is clearly gaining speed—and fast! It’s a matter of the chicken and the egg: which came first and impacted the other? Lambert says, “I think art often reflects culture and social/political moves. You can say that ‘Same Love’ affected gay marriage in that way, or perhaps our culture impacted the creation of ‘Same Love,’ it’s all part of the same thing.” 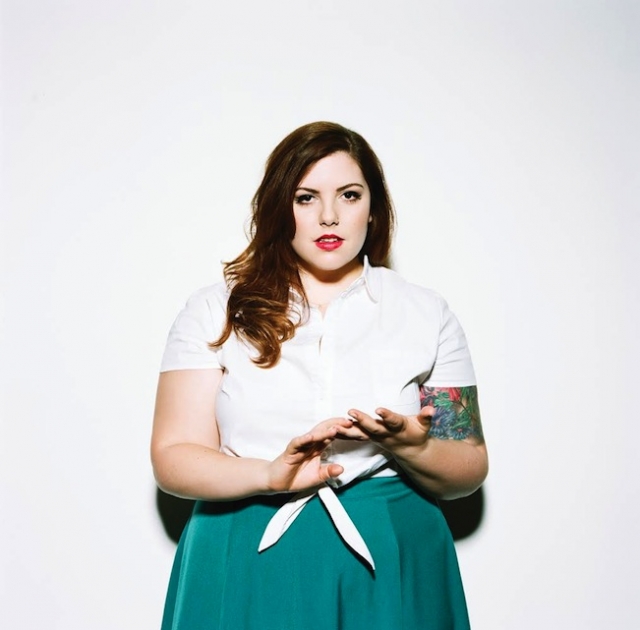 If the events of the past two years seem like a blur, it’s largely because of her marriage-equality anthem, which has taken on a life of its own. Expanding on the “Same Love” hook, she released “She Keeps Me Warm,” a lesbian love song that has inspired, among other things, Angel Haze to rap about being bisexual on her own cover of the tune—which Lambert finds awesome.

Looking at her now, it’s hard to picture Lambert growing up in a Pentecostal household. Admitting that it was challenging, she describes the strong community within the church with a rhetoric that she calls very misguided, especially regarding same-sex love, relationships, and marriage. It was a difficult thing for her family to process.

At six, she saw her mother and family be excommunicated from the church because her mother defied Pentecostal thought. “We lost all of our friends along with our community,” Lambert said. “We really did get shunned. And it wasn’t even all about my mom being a lesbian, it was about her divorcing my dad.” For some, the loss of community and breaking of beliefs might be a crushing blow. Not for Lambert.

As a teenager, Mary discovered two very different extracurricular activities: poetry and the Evangelical Church. “Evangelicals seemed so passionate, so on fire for God, and I think I was just drawn to people who care so much about something.” That desire for authentic human connection also fueled Mary’s poetry, which covered a range of often-taboo topics including body image issues, depression, and her own sexuality.

“This is going to sound so stupid, but I care so much about humanity. Everyone can be a good person, but we’ve forgotten our connection with each other, and that’s how terrible things happen. Humanity can be really ugly, but I think it can be repaired. As a society we’ve forgotten how to love somebody you don’t know, and fixing that really starts with being honest about how you’re feeling. We’re so worried about judgement that we end of judging other people. The moment you allow yourself to be vulnerable by saying ‘I hate the way I look’ or ‘I wonder how the world would be if I was dead,’ things change. Most people, if not all people, has had those types of feelings. So why can’t we say it? When you’re honest about who you are, you build bridges, and that’s what I’m trying to do.” 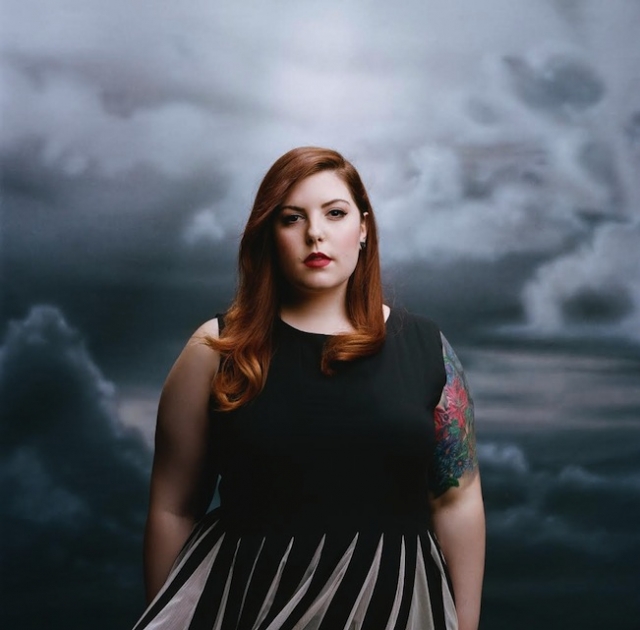 Lambert has never felt a disconnect between being a Christian and a lesbian. This is remarkable considering the stories of countless other GLBT individuals growing up within religious communities. “I think the church has done a really incredible job of alienating people,” she says. “I think it’s unintentional, and based out of fear, and misguided intention. I think the core risk between Christians and the core community is the Christians actually believe they are speaking from a place of love saying ‘I don’t want you to go to hell, I’m doing this because I love you.’ Though appearing to the Christian community as kindness, it is actually very distorted and harmful to the gay community at large.”

Having come out at age 17, Lambert has grown immensely. “Coming out in the church was difficult,” she says. “I didn’t have an issue coming out to the world, or the church. I had an issue with the ideology that has been shoved down my throat from an early age that I was suddenly a freak for my sexuality. It was from then that I apologized daily and repented for being gay. Living with apology is something that I’ve battled with for a long time, whether the stigma was being gay, overweight, or having a mental disorder. Coming out of that I learned empathy. I learned that people in the church actually have a positive intention, though it may not seem that way. People in the church often use the phrase ‘Have you been saved?’ and they really believe that the condemnation of sexuality is based in love. I see that because of my own upbringing, though the ideology is distorted and harmful. I think it’s important to operate both sides with an open heart, because you can debate theology forever, but the only way you ever change anyone’s mind is though their heart.”

It’s clear that Lambert operates from the heart, and emotion as a result of her life’s journey is a strong aspect of who she is. Her last EP, Body Love, came from a struggle to understand self-worth. Body Love opened up the discussion of the female body as both beautiful and a battleground. “I wrote it when I was nineteen,” she says. “Around the time when we had self-destructive behavior between binge drinking, self-harm, and the obsession with being attracted to another person, hungry for acceptance with the illusion that the solution was contingent on another persons attraction.”

And don’t think this huge intellect and range of emotions is reserved for the studio. The live show is about feelings. Describing herself as a very emotional, empathetic artist, she operates under the term “heart on my sleeve.” The term is so true to who she is, it even became the title for her new full-length album and North American tour. She says, “I’m often near tears on stage because of subject matter and intense emotion. I try to keep banter between songs light hearted and fun because no one wants to go to a bummer show and cry a whole bunch. I want to make people cry to feel, and cry because they’re laughing so hard. The shows are a safe space for connectivity, and often feel like one giant, metaphysical hug.” 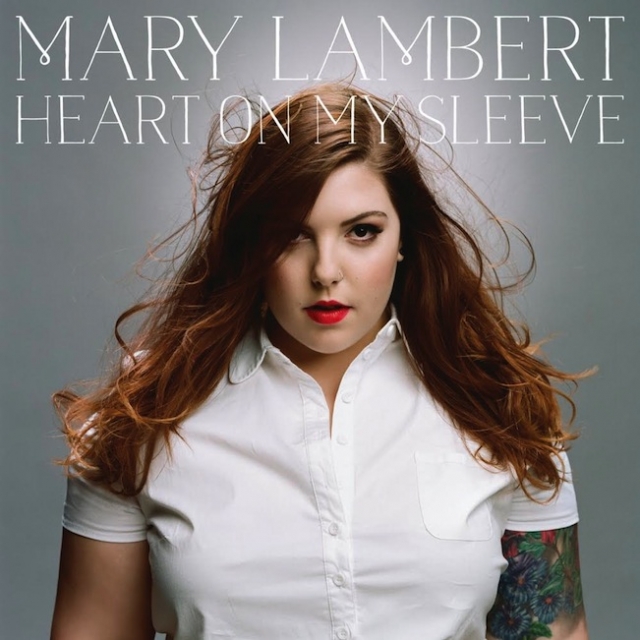 Heart On My Sleeve album cover

Her love for other people shines through: when asked what she is tired of interviewers asking her about, her response was amazing. “The hard thing is when an interviewer wants to talk about pop culture and gossip things,” she said. “I don’t want to feed any energy into that air because it contributes a bad energy to society. Those things I try to avoid talking about. Gossipy stuff can be fun but it’s often at the expense of another person, and I don’t like that so much.”

With so much compassion and creativity inside, Lambert’s talents had to spill into different outlets, integrating both spoken word with songwriting, which she describes as different animals. “I write and perform spoken word because there’s something in it I can’t express through music,” she said. “Spoken word is a stream of consciousness for me whereas writing is a bit more calculated and structure oriented. I have the ability to express different experiences through both art forms, and that is fulfilling.”

Lambert certainly has much in life to cherish, with so much under her belt. “There are many facets of one’s life to be proud of,” she said. “Artistically I’m very proud of this record. It’s a cohesive display of my artistic identity. I’m particularly proud of ‘Rib Cage’ and ‘Chasing the Moon.’ In my personal life I’m proud of the relationships I’ve had and the support system around me. I feel very fortunate for the people around me.”

Mary Lambert’s album, Heart On My Sleeve, is in stores now. See her perform live November 1 at Fine Line Music Cafe. Head to www.marylambertsings.com for more information and to purchase tickets.