From the Editor: Finding Us Out in the Stands 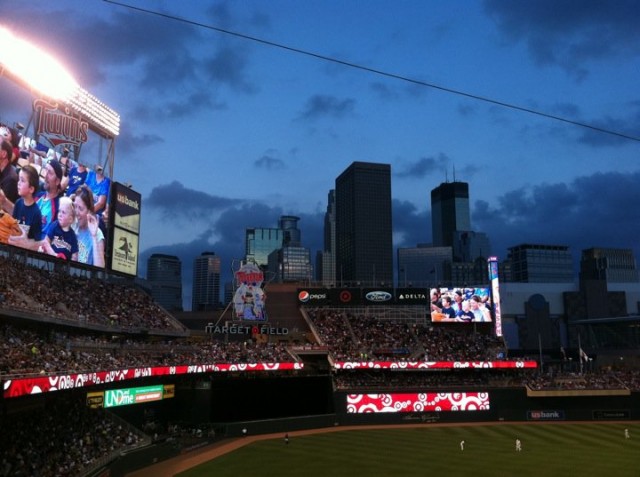 I brought my eight-year old nephew to Lavender’s “Out in the Stands” night at Target Field. I’d never been to Target Field, so I was a little concerned. It’s one thing to go with someone older than eight who’s already been there—or one who hasn’t, but can stumble through all the first-times with me. It’s another to be The Adult. Being The Adult means I have to know What’s Going On. I asked my friends. I asked my coworkers. I asked my brother. Okay, okay, okay. Park there, walk there, and 7th Street ends at the Field. And it did. And we got there.

Once we walked through the gates I looked out at the expanse of people and seats…looked down at our tickets…looked up again…and had no clue as to where to go. I was not blessed with a great sense of direction. I can get from Point A to Point B with aplomb, but usually by envisioning the map or layout in my head. I prefer visual cues. I hadn’t looked for our seats online before setting out for the Field and I was paying for that by being stymied. In the heat. With an eight-year old. Who was hungry.

Then I saw us. 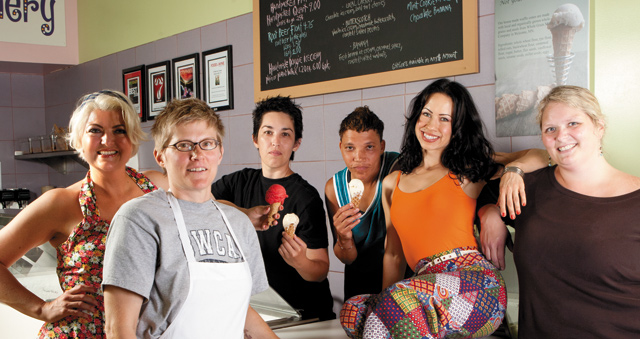 I saw people wearing the same t-shirt that I was and I knew I was close to our destination. Visual cues—white t-shirts, red and blue “Out in the Stands” logos, smiles. I followed them. At the flagpole, I uploaded a picture to Facebook of Courtney raising the flag as our “Out in the Stands” representative and got directions to our section of seats from her friends. Everything was so much more manageable once I’d found us.

Going the direction I’d been pointed, the bunny warren full of people again became confusing. I’m not sure if it was the rate at which I kept glancing at my ticket or that my nephew asked his usual question, “Auntie, do you know where we’re going?” rather loudly, but soon a gentleman in a red Target Field shirt asked me if we needed help finding our seats. Ohmygoshthankyouyeswedo. Without knowing exactly where they were, he informed me how to get there based simply on the fact that I was wearing the “Out in the Stands” t-shirt.

We followed his directions and, suddenly, we were there. With us. We joined a sea of white t-shirts and we settled in, happy. Almost everyone around us was part of our group and, though we didn’t know them, we belonged. The man seated to my nephew’s left, Mark, ended up sort of adopting us, whether or not he knew it (or would have volunteered to do it) as eight-year olds tend to drop all sorts of things when watching a ballgame and eating their way through my wallet. Mark was on the left and I was on the right. He was gracious and so very nice. The game was played and, all too soon, a bedtime loomed and it was time to leave.

As we retraced our steps to leave the Field after the sixth inning, we ran into the same gentleman in the red Target Field shirt who had helped us find our seats. He asked us how our night was and I told him that we had a wonderful time. I sheepishly explained that I was new to Lavender and a little embarrassed to be so lost at our own event, so his assistance was ever so appreciated. We got to get down to the business of having a great time sooner, thanks to his help.

He smiled and said that he was so glad that we all enjoyed ourselves, gesturing to my t-shirt. Then, he held eye contact and pointedly said, “I had a great time, too.”

He smiled again, more broadly—a subtle emphasis to his statement.

I got it. I understood. And, I realized that–whether or not he was wearing a white t-shirt with a red and blue “Out in the Stands” logo—he was with us, too.

The perfect end to a lovely evening “Out in the Stands.”

Hot Fun in the Summertime
Special thanks to Barb Zapzalka at Pumphouse Creamery for hosting our cover shoot with the actresses of Fertile Ashes: Catherine, Mel, Kim, and Sweetpea. Fun shoot, delicious props, beautiful people. See all the photos from the shoot on LavenderMagazine.com or on our Facebook page.