On Saturday, September 24, 1994, I competed as Great Lakes Mr. Drummer 1994 in the International Mr. Drummer contest in San Francisco. That was 20 years ago this month and, amazingly, the people I met and the experiences I had during that weekend have kept resonating and reappearing throughout the last 20 years.

Much has changed since that contest. For starters, there no longer is an International Mr. Drummer title. It, and its companion title of International Drummerboy, in 2002 became the International Leather Sir/Leatherboy titles. And Drummer Magazine, which established the Drummer titles, ceased publication in 1999 but remains legendary.

On the Wednesday before the contest, the fourteen regional Drummer titleholders, and about half as many regional Drummerboy titleholders, met the contest’s producer, Audrey Joseph (who, in 2014, appeared onscreen in Folsom Forever, a documentary about San Francisco’s Folsom Street Fair). We also met our contestant handlers for the weekend, Lenny Broberg and Frank Nowicki (both of whom still are highly visible members of the leather community).

Ms. Joseph started things off by proclaiming, “From now until the end of the contest on Saturday evening, you’re mine!” As contestants, our time was almost continuously committed to getting ready for the contest: interviews with the judges, photo shoots, parties and public appearances, and (most of all) rehearsals.

On Thursday each contestant had a private interview with the judges. The judging panel in 1994 was a rare occurrence in leather contests: all the judges except one were previous International Mr. Drummer titleholders, and that exception was a former International Mr. Leather.

I remember feeling nervous when I walked into the interview room, but the judges were so approachable and un-intimidating that I quickly relaxed, and we all had a warm and friendly conversation. Rather than testing my knowledge of leather history and protocol, the judges seemed more interested in finding out who I was, what my background was, and how it happened that I made it to San Francisco to compete in the contest.

Another judge, Woody Bebout (International Mr. Drummer 1991), told me later in the weekend that based on what he had heard in my interview, he thought I needed to write a book. Eventually I did, and Life, Leather and the Pursuit of Happiness was published in 2010.

Working as hard as we did bred considerable camaraderie among the contestants. This experience was my introduction to the leather-contest concept, which I have seen so often since, of contestants supporting each other as brothers instead of being fiercely  competitive. 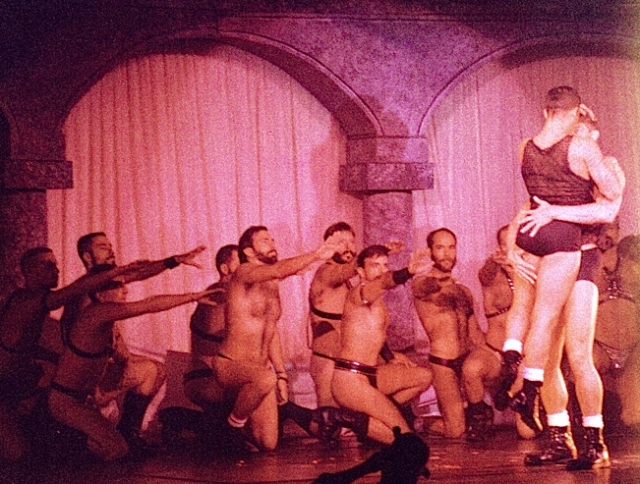 Saturday night came—showtime! The lights dimmed. The show began with the production number. All those hours of rehearsal paid off—we actually did justice to Charlie Seltz’s marvelous choreography. The crowd roared its approval.

One of the evening’s emcees was comedian Shann Carr, who is still doing stand-up today and who has become a filmmaker as well. (I interviewed Carr for this magazine in 2005, when she traveled to Minneapolis for an appearance with our own Miss Richfield 1981.)

In my contestant speech I talked about how labels (“fag—dyke—fairy—breeder”) could be harmful when they were used to pigeonhole people, and how much better it would be if we interacted with people as individuals instead of as labels. Because the contestants were kept backstage, I didn’t get a chance to see or hear anyone else’s speech.

My fantasy started with another actor (dressed in jeans and a leather armband) dragging me (dressed in a business suit) onstage by my necktie. Looking at me angrily, he shouted something about “yuppie scum” and then vowed, “I’ll show you what a real man looks like!” He then tore off all my clothes, including my boxer shorts. (I had wanted to be naked underneath the boxers, but the contest producers would not allow it. Therefore, underneath the boxers I wore the smallest g-string I could find.)

My accomplice then helped me into a leather bodysuit (chosen because it was a quick way of clothing me in leather). He put a Muir cap on my head and a leather armband on my left bicep. (There wasn’t time for boots.) Then he took the mirror and held it up to me so I could see what I looked like, and repeated (less angrily this time), “I’ll show you what a real man looks like.” He put down the mirror, switched his armband from left arm to right arm (i.e., switching from top to bottom), and I led him offstage.

Evidently the judges that year were not in the mood for a minimalist fantasy with a message—they were looking for spectacle and big props. Gary Weltner, Mr. Mid-Atlantic Drummer, made a point about safe sex in his fantasy by using a silk condom big enough to completely cover him from head to toe. Don Robert, Mr. Southern California Drummer, used a 14-foot high gallows as part of a wild-west fantasy. Those big-prop fantasies helped win first-runner-up and second-runner-up honors, respectively, for the contestants who presented them.

While I was backstage during intermission I suddenly developed a sharp, stabbing pain in my right side. My fellow contestants sat me down in a corner of the backstage area, gave me some water to drink, and told me to try to relax. Eventually the pain subsided, and I was able to finish the competition. 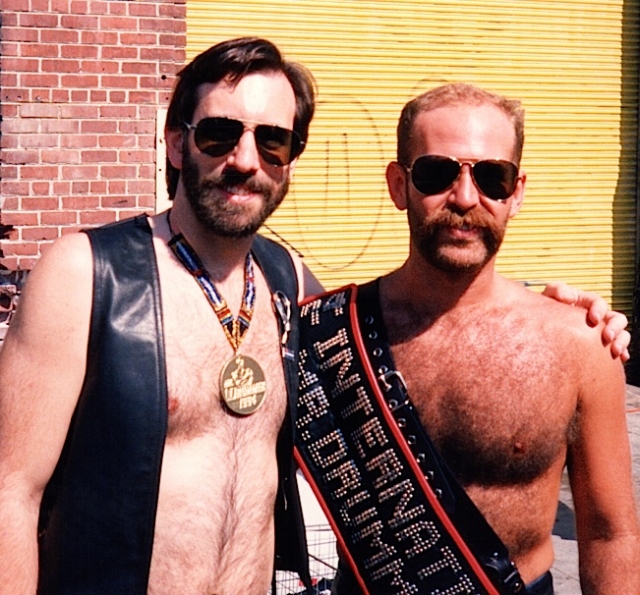 Hanging out with Keith Hunt, the new International Mr. Drummer, at the 1994 Folsom Street Fair. Photo by Ken Binder.

The winner of the International Mr. Drummer 1994 title was Keith Hunt, a sweetheart of a guy with a sunny disposition, a big smile, a big mustache, and reddish fur all over his chest. I was glad for him.

The next day, Sunday, was the Folsom Street Fair, and the Drummer contestants spent a perfect California day hanging around the fair as a group. The contest was over, so we had no more duties and could simply enjoy the festivities.

Late Sunday evening, back at the host hotel, the stabbing pain in my side returned. A doctor was called to the hotel room; he diagnosed a kidney stone. I had been so caught up in the whirlwind of the competition and the show that I had neglected to maintain proper hydration. (Nowadays, when a contestant who will be competing in International Mr. Leather or another contest asks me for advice, “maintaining proper hydration” is at the top of the list.)

Not long after the Drummer contest in San Francisco, I was offered the chance to write a leather column in the new GLBT magazine that was just getting started in the Twin Cities. Over 500 issues later, here I am.