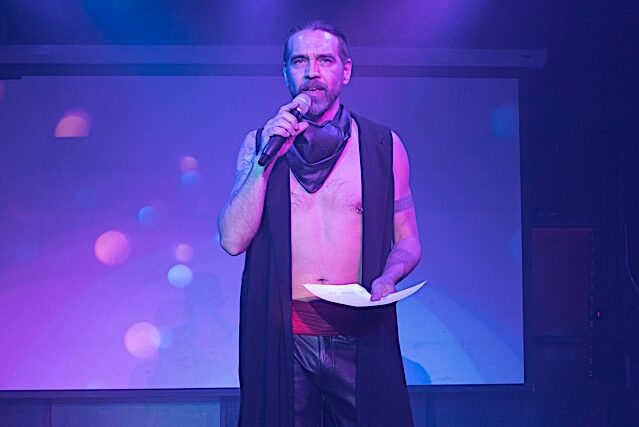 For many years The Saloon has welcomed the leather/BDSM/fetish communities to occasional “Tank” parties (lately the third Friday of each month). However, during the weekend of Friday through Sunday, February 18-20, the leather and kink communities took over the entirety of The Saloon during “Tank Weekend,” a weekend-long celebration of leather and kink expression. Tank Weekend was sponsored by Twin Cities Leather and The Saloon, and was the first large local leather/BDSM/fetish community event held in the Twin Cities in 2022.

According to Karri Plowman of Twin Cities Leather, Tank Weekend was envisioned as a way “to mark the last two years for anyone who feels comfortable coming out to hold space.” Rather than a competition event, Tank Weekend was a chance for the community to do some celebrating, and perhaps some healing. A promotional video posted on Facebook proclaimed, “Tank Weekend is for celebrating and healing our diverse kink and leather community. You are wanted here. This is our space. Let’s share it together. Because our community is for everyone. Not just ‘no matter who you are.’ But because of who you are.”

Saturday’s events started out with a “Town Hall Gathering” and community roundtable discussion on Saturday afternoon. This was an opportunity for community members to vent, share, discuss, process, and hopefully start to heal by letting go of the challenges of the last few years. There was also discussion of how individuals, and Minnesota’s leather/kink communities, can move forward.

Those attending the discussion were offered pens and brightly colored sheets of paper and were invited to write down things from the past two years that they wanted to let go. Because a bonfire or campfire would not be a good idea inside The Saloon, a paper shredding machine was at center stage. One by one, those who wanted to do so stood before the crowd, shared what they had written on their sheet of paper, and then fed the paper into the shredder as a way of leaving those things behind and moving forward.

The community roundtable discussion was followed by two educational presentations, “The Art of Negotiation: A Refresher” and “OK, I’ve got them tied up, now what?” Both sessions were presented by members of the Knights of Leather.

The weekend’s final events were a Sunday brunch, in keeping with the tradition set by the Mr. TCL contest, and The Saloon’s Sunday-evening shower contest.

Bootblacks were available at Tank Weekend events both Friday night (Sage Leigh) and Saturday (Bootblack Paul). A leather/fetish dress code was enforced for the two Tank parties, and masks and vaccinations were required for all the weekend’s events.

An announcement was made on Saturday evening during the “Leather, Laughs, and Lashes” show that the Mr. TCL contest, which traditionally has been held in mid-February, in the future will be held during the fourth weekend in September (when the weather is better). That means the next Mr. TCL contest will be held the weekend of Sept. 23-25, 2022. That’s the weekend after the Atons of Minneapolis hold their 50th-anniversary run (Sept. 16-18). Out-of-towners might want to plan an extended trip to the Twin Cities at that time to experience both events.