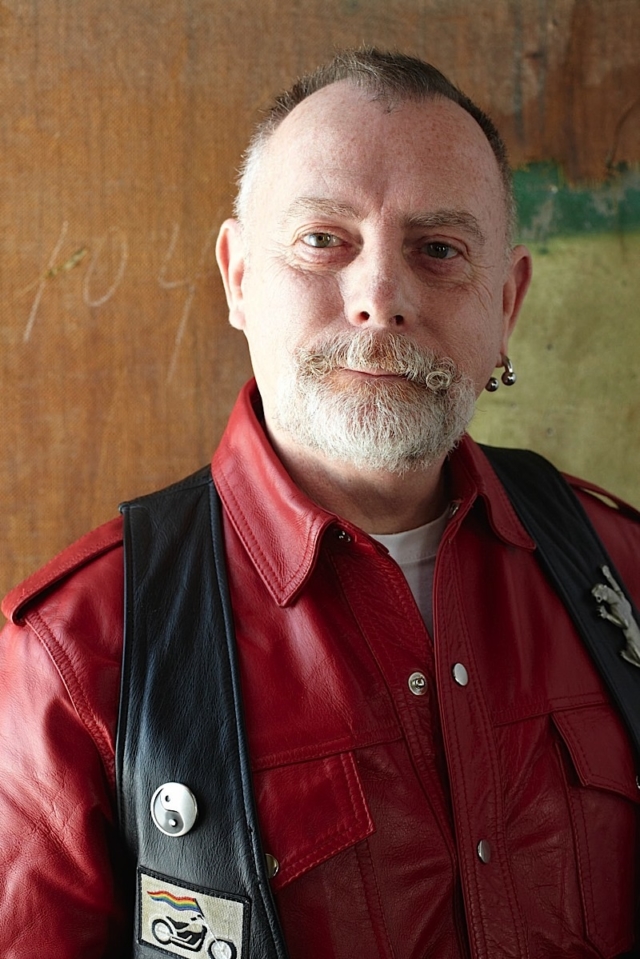 Samuel W. “Sam” Carlisle, a leader in Minnesota’s leather community for many years, died on March 27, 2018, in Minneapolis. At the time of his death he was surrounded by friends and family.

Carlisle was born March 2, 1946, in Lake Benton, Minn., and during his youth lived on the family farmstead. In the mid-1960s, he moved to Minneapolis. His roommate at the time, Patrick Pierson, recalled that, like so many young gay men who moved to the city, they lived for a while near Loring Park. They also hung around the outside of a gay bar called Sutton Place until they were old enough to enter the bar legally. Pierson also recalled that at the time Carlisle’s friends called him “Sammy.”

In the mid-1960s, Carlisle began working at Dayton’s department store in downtown Minneapolis. He spent over 38 years at Dayton’s in a career that ranged from window display designer to furniture sales manager, retiring from the Dayton’s Southdale Home Store in 2007. He sported an amazing handlebar mustache and a colorful array of sports coats, suits, and shoes.

In 1992, Carlisle joined the Atons of Minneapolis and remained a member for 26 years until his death. His first task for the club was to be the social chairman. He arranged club dinners and events that helped to increase the club’s membership and involvement with other leather clubs and organizations in Minnesota. Carlisle went on to serve the Atons as president, vice-president, treasurer, and run chair.

Around 1995, Carlisle first became involved with leather pride, which at that time was simply a bar night held during the Twin Cities Pride weekend. Over the years of his involvement, the leather pride planning committee evolved into an organization called Minnesota Leather Pride (MNLP). Along with a team of other volunteers, Carlisle helped to expand Minnesota’s leather pride celebration into a month of kink and leather events during Pride month in June. Carlisle continued to serve MNLP until the time of his death.

Carlisle’s activism and leadership in the leather community extended outside Minnesota. He frequently traveled to leather events, such as runs and contests, in other cities. He became well known to members of other clubs, including the Corn Haulers L&L Club of Iowa and the Kansas City Pioneers Leather Levi Club. For four years, Carlisle served as president of the Mid-America Conference of Clubs (MACC), an inter-club organization that coordinates activities among midwestern leather clubs. In every group to which Carlisle belonged, he worked hard to foster a strong sense of camaraderie.

As a designer and in life, Carlisle believed that “more is more.” He had three closets full of leather. He used former store display items to decorate his home dramatically yet tastefully. The table centerpieces he created for banquets at runs presented by the Atons are legendary. In the 1980s, Carlisle lived with his partner Glen Peterson in Minneapolis, until Peterson’s death of complications from AIDS in 1989. Longtime friend David Anderson recalled that at Peterson’s memorial service at Lakewood Cemetery, Carlisle handed out his large collection of silver bells and those in attendance rang them while Carlisle carried Peterson’s ashes into the chapel.

Carlisle almost never missed traveling to Washington, D.C., in January to attend the Mid-Atlantic Leather weekend. This is where he eventually met his future husband, Michael Kramer. In January 2017, while attending Mid-Atlantic Leather, Carlisle and Kramer were married while surrounded by their leather family. The couple loved to take long cross-country rides together on their motorcycles. They rode south to Key West, west to Idaho Falls through Yellowstone, and east through the area of the five Great Lakes.

Carlisle is survived by husband Michael Kramer, sister Nancy (James) Hatter, nephew James Carlisle, and cousins and other relatives. He leaves behind his roommate Del Vogt, their cats Wesco, Chippewa, and Prada, and many friends, club brothers, fellow riders, and a large leather family.

A memorial for Carlisle was held on Saturday, April 7, at The Cowles Center. Many of the more than 250 attendees wore leather, uniforms, and other colorful clothing to honor Carlisle’s outgoing nature.

At the request of Carlisle’s family, any memorial donations may be made in his name to The Aliveness Project in Minneapolis.