Ren Rushold became the Twin Cities’ newest leather titleholder at this year’s Mr. Minneapolis Eagle 2015 contest. The contest was part of an entire weekend of events that took place November 14–16, 2014, at the EagleBoltBar in Minneapolis. This year’s co-producers, Derek Harley and Ryan Brown, along with executive producer Ed Hopkins (owner of the EagleBoltBar), presented the most organized, punctual, and polished contest in the event’s history.

This year’s organizers used technology to enhance the weekend. The contest’s former venue, the Bolt Underground, has been closed, so this year’s contest was held in the Bolt Bar. Because every video screen in the bar complex carried sound and video of the contest, there wasn’t a bad seat in the house. In addition, a downloadable Yapp app for iOS and Android devices put all the details about the weekend’s events literally at peoples’ fingertips.

The weekend started with a Greet-the-Meat party Friday evening at which a welcome letter from Minneapolis Mayor Betsy Hodges was read from the stage. In the letter she specifically thanked Jason Little, the outgoing Mr. Minneapolis Eagle 2014, for his community work in education and activism. (Meanwhile, in a show of support for the mayor, many audience members were taking and posting #pointergate photos.)

On Saturday afternoon the contestants had their private interviews with the judges. Other weekend attendees enjoyed a series of three leather educational sessions presented by Kink U. Judges for the weekend were Jason Little, Mr. Minneapolis Eagle 2014; Ramien Pierre, Mr. DC Eagle 2014 and the current International Mr. Leather 2014; Bootblack Kai, Great Lakes Bootblack 2013; Drew Riebhoff, Mr. Iowa Leather 2014; Valkyrie, a member of the Knights of Leather; Joseph “Rocky” McCombs, Mr. Ohio Leather 2013; and Tim Holden, a member of the Atons of Minneapolis.

Saturday evening’s contest and show opened with a blessing by the Ladies of the Lake, the Minneapolis chapter of the famous Sisters of Perpetual Indulgence. This was followed by a videotaped welcome from Chuck Renslow, executive producer of the International Mr. Leather contest weekend in Chicago.

The evening’s three contestants—Bernd Wellkamp, Ren Rushold, and Russell Waisanen—were introduced during the traditional Keg Walk, in which each man hauled a beer keg through the crowd and up to the stage. The three contestants also competed in a question-and-answer segment in which the audience helped choose the questions.

Saturday evening’s show also included a parade of club colors and the introduction of an extensive line-up of current and former titleholders and other VIPs from across North America.

In his step-aside speech, outgoing Mr. Minneapolis Eagle 2014 Jason Little talked about community health, both mental and physical. He specifically spoke in support of Truvada, the pre-exposure prophylaxis (PrEP) medication for HIV prevention. The medication was approved by the FDA in 2013 for PReP use, but remains controversial and an occasion for name-calling in some quarters. During his speech Little swallowed a Truvada pill onstage and declared, “If this is what it means to take charge of my sexual health, then I am fucking proud to be a Truvada whore!”

Little’s final act as Mr. Minneapolis Eagle 2014 was to place the title sash on his successor, who turned out to be Rushold. As Mr. Minneapolis Eagle 2015, Rushold will represent EagleBoltBar and Minnesota’s leather community in the 37th annual International Mr. Leather competition (www.imrl.com), May 22-25, 2015 (Memorial Day weekend) in Chicago. 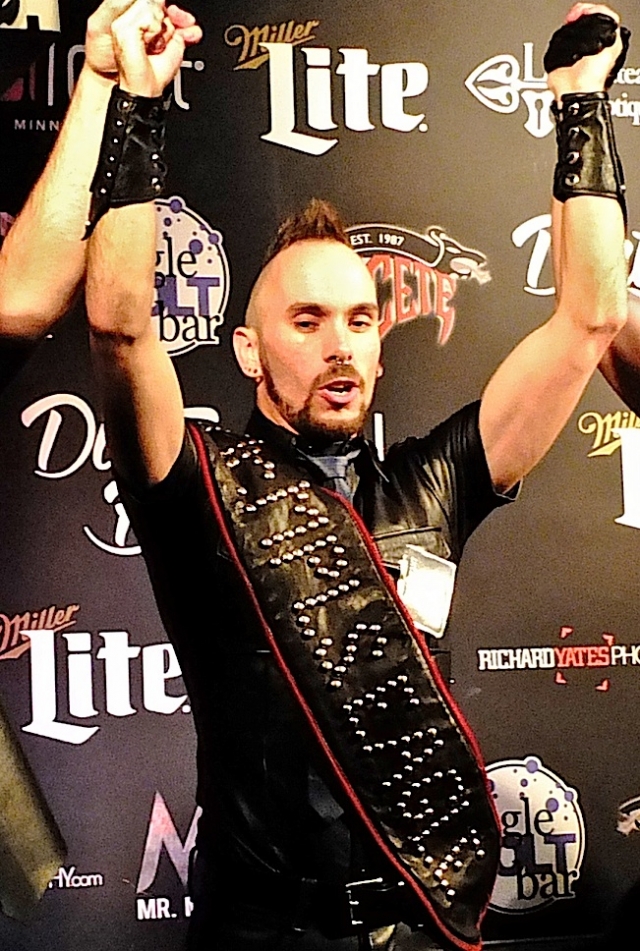 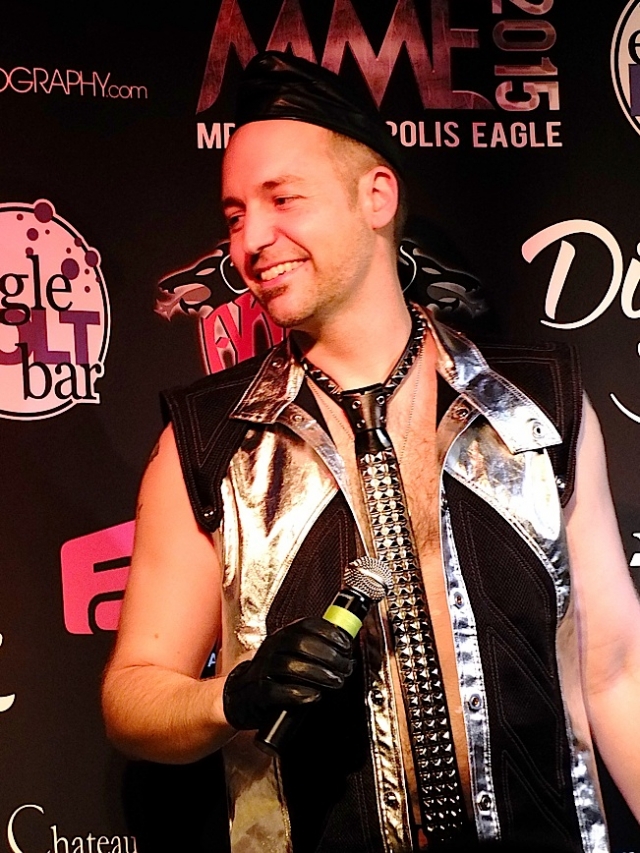 Contestant Bernd Wellkamp during the question-and-answer portion of the contest. Photo by Steve Lenius. 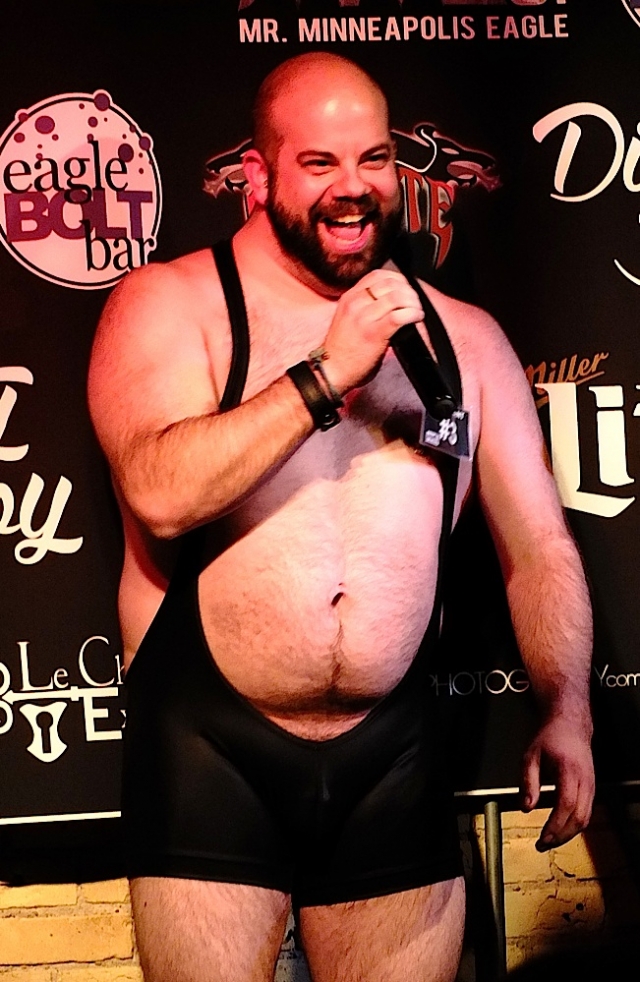 Contestant Russell Waisanen during the Keg Walk portion of the contest. Photo by Steve Lenius. 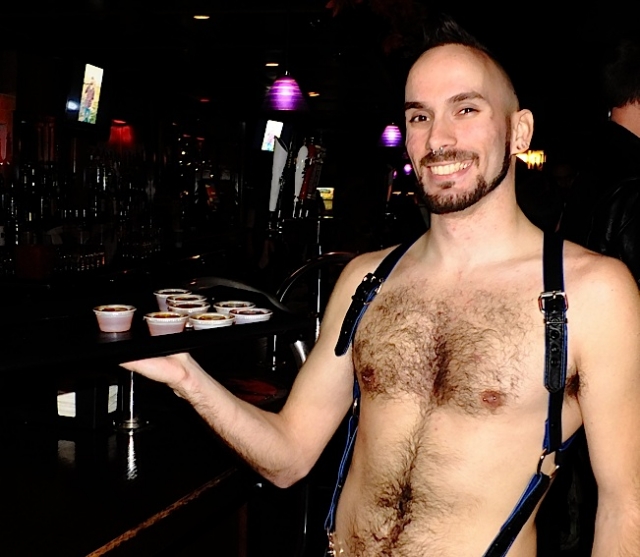 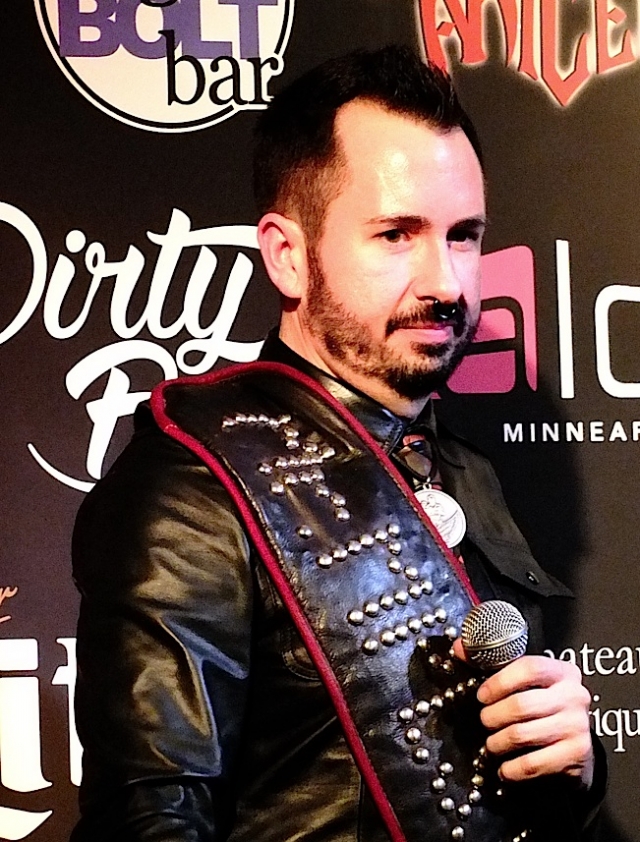