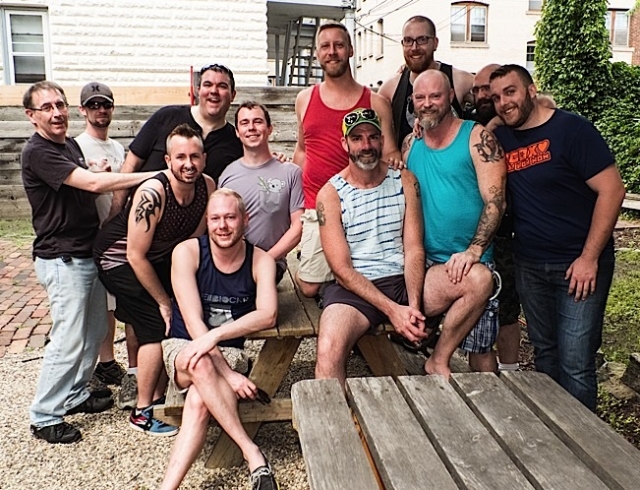 Relaxing in the garden in back of Twin Cities Leather & Latte at the Titans of the Midwest third-anniversary garden party. Photo by Steve Lenius.

Your humble columnist has written previously about kink coming out of the shadows and into the mainstream. This mainstreaming process has reached the point where, for some time, kink has been represented in the characters and plots of prime-time television shows.

This has not always been a good thing.

In the episode the lead character, a young woman, is smarting after being dumped and then publicly humiliated by her boyfriend. Alone and lonely on a Saturday night, she decides to do laundry. In the laundry room of her apartment building she meets a nice young man from an apartment upstairs, and they start talking (including the inevitable intimate conversation about his underwear preference). 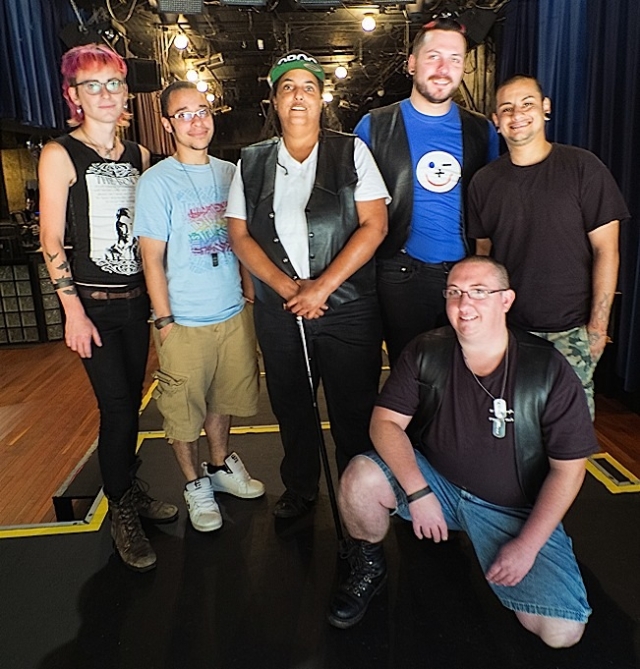 Members of the Titans of the Midwest/Kink U gender-identity discussion panel. Photo by Steve Lenius.

They wind up in his apartment, and things seem to be going well. At one point she asks if she can use his bathroom. With the bathroom door closed, she goes through his medicine cabinet. “No antibiotics — that’s a good sign.” He takes vitamins, another good sign. No antidepressants or anti-anxiety medications. Okay, she’ll marry him.

She next decides to check out his bedroom, “the honeymoon suite.” She opens the door and sees — surprise! — a fully stocked dungeon in his bedroom. She immediately proclaims, “The wedding is off!” The laugh track goes crazy.

She then turns to see her ex-future husband standing in his boxer shorts and undershirt with a spiked collar around his neck, and holding a leash attached to the collar. He instructs her to take the leash and “Tell me what to do in a firm voice.”

She hesitantly takes the leash and gives him a command: “Be normal!” The laugh track titters. She tells him to “Sit” (which he obediently does) and then “Stay.” We next see her running out the apartment door, telling herself that she may be alone, but at least she has not been murdered. The laugh track goes crazy again.

In this short series of scenes she has just painted the male character as not normal, not marriageable, and potentially a murderer, all because of his kink proclivities.

In the next scene this incident is milked for more laughs. She tells her mother about the guy in 2B, to which her mother responds, “Oh, Dog Boy?” The mother finds him nice — “Sometimes he brings me the paper” (cue the laugh track). “You could do worse — and he’s probably pretty loyal.” Laugh track again. When the daughter expresses concern that he is a neighbor and she will probably run into him again, the mother counsels, “You’ll be fine. Just keep some treats in your pocket.” More laugh track.

Relaxing in the garden in back of Twin Cities Leather & Latte at the Titans of the Midwest third-anniversary garden party. Photo by Steve Lenius.

The last joke is when she hears scratching on the door, looks out the peephole and sees her ex-future husband jumping up and down, tongue sticking out of his mouth, in fully puppy mode (to the accompaniment of the laugh track).

How many times and in what ways have kinky people just been insulted on national television by this episode? Are we laughing at the puppy, or at the lead character’s shocked and disapproving overreaction to the puppy? I might have thought the latter until the puppy was shown leaping up and down outside the door. That struck me as puppy minstrelsy and told me that we, the audience, were supposed to be laughing at the puppy character with all the dungeon equipment in his bedroom.

Kinky people have been portrayed on TV in dramatic shows (usually crime shows) as the evil villains, with the intent of striking fear into the hearts of viewers. But now, evidently, kinky people have gone from being villains to clowns, and kinky characters are being laughed at.

Meanwhile, back in real life: The Titans of the Midwest, a regional club, just held their third-anniversary celebration in Minneapolis. The celebration started Friday evening, July 31, with a Gear Blast and dance party at eagleBOLTbar. Saturday afternoon’s Kink U classes started with a panel discussion on gender identity at The Saloon, after which six classes were presented on two tracks: Boots and Feet at The Saloon and Touch/ Impact Play (including a well-attended class on hugging) at eagleBOLTbar.

On Saturday evening, a show called “A Dark and Stormy Night: An Evening of Fantasy” was presented at The Saloon. The celebration’s finale on Sunday afternoon was a garden party at Twin Cities Leather & Latte.

It was all great fun. And I didn’t hear a single laugh track the whole weekend.