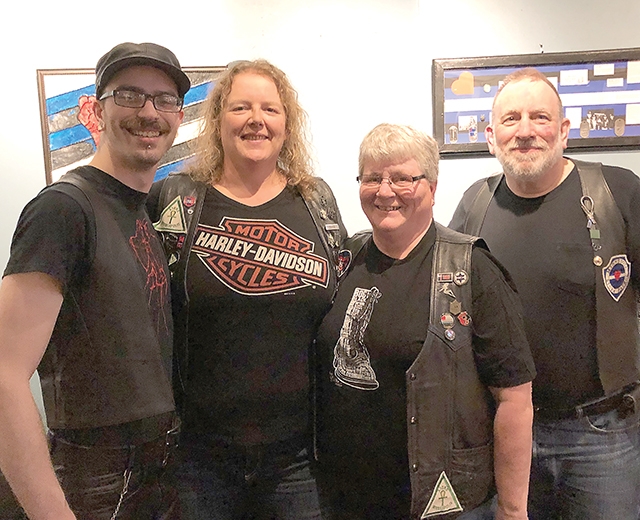 A leather history presentation on April 9, 2019, at Twin Cities Leather and Latte attracted a large and enthusiastic audience. Built around a theme of “Old Paths, New Intersections”, the evening was an open interview in which emcee Kurt Patton, Mr. Twin Cities Leather 2019, directed a series of leather history questions to longtime community members PJ Knight, Valkyrie, and your humble columnist.

The event was sponsored by Patton and by The Service Academy, a monthly gathering (“munch”) for service submissives. The Service Academy hosts discussions and provides education in service skills such as bootblacking, leather care, and foot and shoulder massage.

To get the interview started, Patton first asked the panel members what they were most proud of being associated with or involved in during their time in the leather/BDSM/fetish community.

Knight’s answer: “It’s on my back”—referring to the Knights of Leather patch on the back of her leather vest. In 1985, Knight was the Knight of Leather’s first official pledge, and she has been involved with the club ever since.

Valkyrie also is a member of the Knights of Leather, but she said her proudest moment was being made an honorary member of the Atons of Minneapolis. For her, being the club’s first female honorary full member is “a privilege and an honor that I just still to this day can’t believe was bestowed on me.”

As a preamble to the next question, Patton talked about how much he enjoyed sitting around a campfire at a leather run “talking about how we got here” and hearing people share their leather stories. He mentioned the importance of these kinds of stories and how such stories often go unrecorded and are lost.

“So,” Patton said to the panel, “What’s your campfire story?” The funny and touching stories that were shared by both panelists and audience members included tales of heroic attempts to free a submissive from a set of jammed handcuffs; witnessing a human Newton’s Cradle involving ten men, five bowling balls and a lot of rope; making a splash as a new community member wearing “the most righteous pair of boots you’ve ever seen”; a minor mixup during an electrical-play scene; and several community members showing kindness, generosity and support for someone during an out-of-town trip for a funeral.

As the evening progressed, several panelists and audience members shared stories of how they got involved with the leather/BDSM/fetish community, and panel members gave advice for people wanting to get involved in the community. Here is a greatly simplified summary: show up, ask questions, be open to new experiences, but also learn to say no when it’s appropriate.

Other topics discussed during the evening included leather exclusivity vs. leather inclusivity (for example, the difficulty some women said they experience when trying to buy a drink at a leather bar). There also was an excellent discussion on the dangers of assumptions and the benefits of communication concerning consent, boundaries, and community norms.