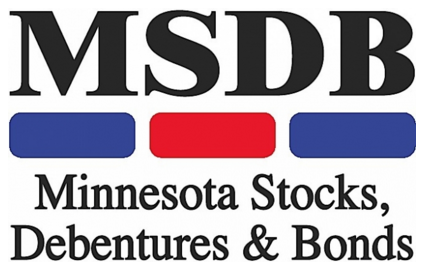 Minnesota Stocks, Debentures and Bonds (MSDB), a pansexual kink organization based in the Twin Cities, recently celebrated its twentieth anniversary. At a panel discussion held Sept. 4, 2018, at The Lab, the group’s monthly educational presentation, some of the original board members reminisced about what has happened during those twenty years. Stories, laughter, and memories were shared, and it was a great chance for those in the audience with less time in the community to hear some interesting community history.

Prior to 1998, when MSDB was formed, the gay male leather community had two local clubs, the Atons of Minneapolis and Black Guard of Minneapolis. Leather lesbians had their own local club, the Knights of Leather.

But the heterosexual/pansexual kink community intentionally remained below the radar. Local kinky folks communicated with each other through the BarDo Exchange, a computer bulletin board system (BBS). According to Claudia Pauline, “BarDo was started by people in professions who could lose their jobs if it was found out that they liked to do this stuff.”

Other groups and organizations spun off from these groups. But membership in the various groups often overlapped, and the groups were still supportive of each other because, as Claudia Pauline explained, “We were still a small community and didn’t want to cut ourselves off from other parts of the community.” Other areas of the country with larger kink communities were different: In many cases, if you belonged to this group, you didn’t go to that group’s events.

A lawyer in Iowa who was a friend of one of the MSDB founders thought that a for-profit model could work for a kink organization and created Iowa Stocks and Bonds (ISB). A group of people in Minnesota considered forming such a group and calling it Minnesota Stocks and Bonds. Then they realized that if they added another financial term, “Debentures,” to the group’s name, the initials for that name would be “MSDB,” which is the reverse of “BDSM”—a happy accident. The Iowa lawyer prepared incorporation papers, and Minnesota Stocks, Debentures and Bonds was incorporated as a for-profit Minnesota corporation on May 28, 1998.

MSDB started with six original stockholders, and about 20 additional people have been stockholders for periods of time through the years. Stockholders have invested in MSDB both financially and, to an even greater degree, in volunteer effort.

One of MSDB’s goals, and greatest accomplishments, is education. MSDB held classes in dungeon etiquette and training for dungeon masters because, as panel member Renae said, “This was all new and people just didn’t know.” Panel member Dan said that education was especially important when MSDB was formed: “In those days the community was smaller, but also it was younger in terms of experience. Most of us that had been around a year or two had a little more knowledge than the people who had been around a week or two. But everybody in the whole community was new to this.”

Probably the longest-lasting education endeavor of MSDB is The Lab, a monthly educational event that MSDB has been producing for over ten years. (The Lab was started in 2005 by another group called Erotic Deviance.) The Lab is both a safe place to learn and a good way to cultivate new speakers, presenters, and educators. Renee said she appreciated that MSDB “taught me things that I never would have known about. But they also taught me how to be safe about it, and to be careful, and what precautions to take, and about consent.” Charger said that MSDB’s educational efforts were “one of the things I worked on that I was most proud of when I left the board. And it’s still going today.”

MSDB also has quite a reputation for presenting amazing fetish parties and events. Recurring themes have included the Bizarre Bazaar for kinky Christmas shopping, the Taxing Play Party in mid-April, the Zombie Prom, and A Midsummer Night’s Scream. MSDB has presented parties in notable venues such as Patrick’s Cabaret and First Avenue, as well as in warehouses, hotels and motels with swimming pools and themed suites, theaters, barns and a converted church. People still talk about these MSDB parties ten or fifteen years later. As Renae put it, “A lot of great friendships came out of those parties.”

MSDB has been able to combine education and partying by creating weekend-long events with nationally known educational presenters. Jay Wiseman, Lee Harrington, Dossie Eastman, Deborah Addington, Fakir Musafar, Cléo DuBois, Joanne Gaddy, and M. Christian are some of the dozen or so presenters that MSDB has brought to the Twin Cities.

Twenty years after its founding, MSDB’s The Lab continues to educate every month, and MSDB continues to throw great kink parties and events. The best way to keep up with what’s being discussed at The Lab, as well as with MSDB’s monthly munches and other events, is through the MSDB group on Fetlife.com.