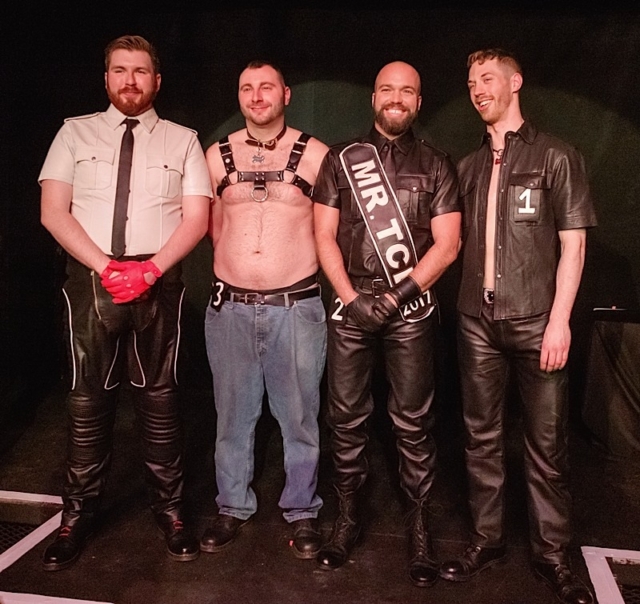 The first of those photographers was Ryan Coit, who was awarded the Mr. Twin Cities Leather 2017 title on Saturday evening, Feb. 15. Other contestants competing for the title were Steve Parker, Cerberus and Pup Buster, all of whom represented themselves well onstage and during the weekend’s events.

Friday evening’s Meet & Greet was followed by SpANK, a special leather edition of The Saloon’s popular Tank night. Saturday afternoon was devoted to Kink U educational events presented by the Titans of the Midwest: a panel discussion on leather, kink, and recovery, followed by classes on ageplay; humiliation, degradation, and objectification; gender fucking; and cupping.

Saturday evening’s contest show featured some amazing and entertaining talent presentations by the contestants. Cerberus did some leather stand-up comedy; in a Muppet-themed performance, Pup Buster, playing Miss Piggy, read from 50 Shades of Grey and then topped Kermit the Frog, who was played by Eric “Pup Omega” Stafford, Mr. Minneapolis Eagle 2017; and Steve Parker played an insatiable power bottom in a scene with Sir Roman, Mr. Minnesota Leather Sir 2016.

Coit’s entry in the talent portion of the contest broke one of my cardinal rules for leather fantasy performances: Keep the focus on the contestant, not on the other people appearing in the fantasy. But in his talent performance Coit, playing the part of a photographer, ignored this rule by focusing the audience’s attention on the people he was photographing instead of on himself. The models were front and center in the bright stage lights, striking fabulous poses, while Coit stayed in the shadows, often with his back to the audience. 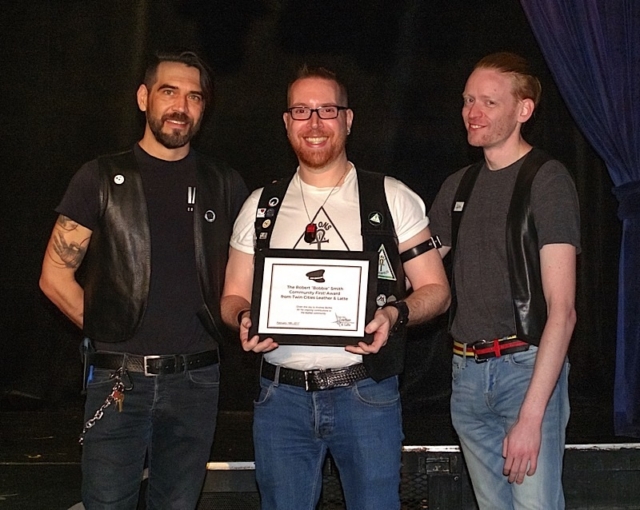 In another coincidence, another notable photographer was honored at Sunday’s Victory Brunch. At the brunch, which was catered by The Nicollet Diner, the co-owners of Twin Cities Leather & Latte, Karri Plowman and Tynan Fox, presented the Robert “Bobbie” Smith Community First! Award to Andrew Bertke. The award recognized Bertke’s many years of “ongoing contributions to the leather community” with a variety of organizations in a variety of capacities. Last year Bertke was honored with the Pantheon of Leather’s Midwest Regional Award and with a Lavender Magazine Community Award. Bertke was given a Minnesota-nice “roasting” by fellow Atons members Karri Plowman, Bobbie Smith, your humble columnist and Sam Carlisle. Visit everettallenphotography.com to see Bertke’s photography portfolio.