Kink U filled the afternoon with a great community discussion and demonstrations. You can see more photos at https://www.everettallenphotography.com/mme2019 @2018 Everett Allen Photography. Please do not download and repost these photos. You are welcome to share them from this page. 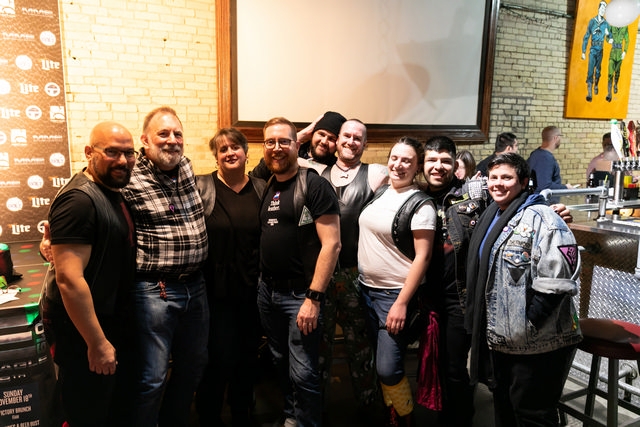 The Kink U sessions at the recent Mr. Minneapolis Eagle weekend included a panel discussion on the “Evolution of the Leather Scene in Minnesota.” The discussion took place Saturday afternoon, Nov. 17, 2018, at eagleBOLTbar. A large and interested crowd showed up to hear what panel members had to say—and to contribute to the discussion. (Kink U is a presentation of Titans of the Midwest.)

Panel members were Vicki Knight, Andrew Bertke, Tim (ASH!) Hotchkin, Mike Sletten, Evie Bea-Pan, Carter Thurmond, Boy Woody, and your humble columnist, with Sir Ivan as panel organizer and moderator. The panelists were a diverse group representing a wide range of time and experience in the local community. Following are some takeaways from the discussion.

• The local leather/BDSM/fetish community has grown amazingly over the last several decades. Bertke noted that there are a lot more groups today than there were when he got into the community. In the mid-1990s there were four to six groups. Today, at last count, there are 57 leather and kink community groups in the local area.

• We do well at getting along with each other. As a rule, all these local groups support each other rather than fight for turf. That’s good, and it’s important that we keep supporting each other. At times, local leather/BDSM/fetish communities in other areas have been burdened with backbiting, infighting, and major arguments. Many years ago, unfortunately, Minnesota’s leather community also went through such a phase, and it’s important that we don’t go back to that.

• We network and share information well. People are approachable and willing to help newcomers. Hotchkin gives a lot of credit to Minnesota Leather Pride for facilitating communication between various community groups, and Sletten noted, “We have a lot of really good teachers.”

• One thing we all have in common is a radical sexual identity. Leather community members tend to be accepting of differences (or what some might call “weirdness”) and even to celebrate those differences. Bea-Pan remarked that everyone attending this discussion, just by virtue of their presence, was a radical. “You like something different? Fine. Buckle up. Let’s have a conversation.” Along the same lines, Boy Woody gave an example of a common community attitude: “Oh, you’re weird too? Let’s talk about it.”

• Some people still can’t be out or public with their leather/kink affinities, and that need for privacy needs to be respected rather than shamed. Fortunately, the local leather/BDSM/fetish community includes under-the-radar groups for these people.

• The fact that some people can’t be out about their leather and kink interests underscores the importance of safe queer physical spaces, like TCL&L and eagleBOLTbar, and why it’s important to support them.

• The leather community today is easier to negotiate for women, trans people, people of color and other minorities within minorities. We can be proud of this progress.

• But we still can do better. Panel members mentioned that sometimes community members are still not taken seriously because of their appearance, their youth (or, conversely, their accumulated years), or even the sound of their voice.

• We have done well at preserving our community’s history—so far. Thanks to countless club scrapbooks and the individuals who compiled them, we have records of all the amazing things this community has accomplished over the years.

• We need to continue preserving our community’s history. Panel members expressed concern about how to continue preserving our history in an age where everything is moving from paper to digital. We are still doing amazing things, but are we documenting them for future generations? As Knight pointed out, “If you don’t know where you came from, you don’t know where you are.”

• In addition to preserving our history, we need to leverage it. Younger community members need to be aware of the community’s history. That will let them leverage the accumulated wisdom of the community’s elders, who have already fought certain fights so that younger folks don’t have to. We need to respect the history of our community’s evolution as learnings that can be used going forward into the future. I will let Knight have the last word here: “Talk to people who have been around for awhile, and find out how the community got here. And don’t take it for granted.”