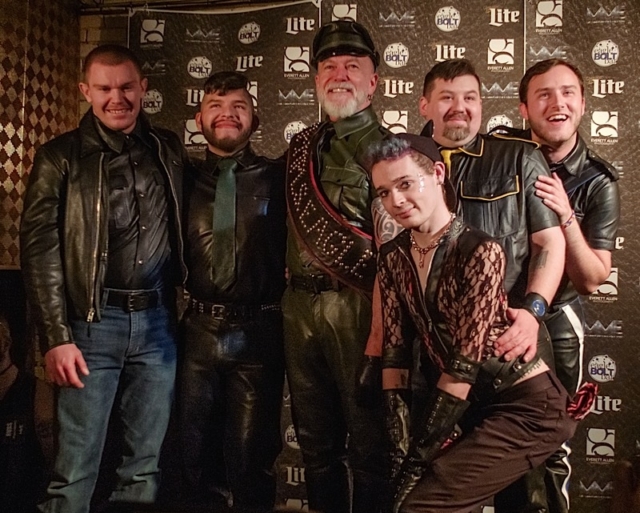 “What do a kitty, two puppies, a jock, and a Sir have in common?” That was the opening sentence of the official press release for the Mr. Minneapolis Eagle 2018 contest, which was held the evening of Saturday, Nov. 11, 2017, at the eagleBOLTbar.

The second sentence in the press release answered this question: “They were the five diverse contestants representing their version of leather as high cow season descended on the eagleBOLTbar for the Mr. Minneapolis Eagle 2018 Contest Weekend (#MME2018)!”

Notice that word—“diverse”—that seems to be everywhere these days. Notice also that the contestants were representing “their version of leather.” (Find more photos and coverage of the Mr. Minneapolis Eagle 2018 contest online at lavendermagazine.com/our-lives/pictures-tell-story-mr-minneapolis-eagle-2018-contest/).

The contest was great and very enjoyable. But I was struck by how different it was from the first leather contest I attended in 1993, 25 years ago. Back then some people might have thought “diversity” meant leathermen and leatherwomen in the same room. Some people also might have said leather didn’t have “versions.” Leather meant leather—and, well, maybe latex or rubberwear.

The leather community that started in the post-WWII era was primarily a subset of the gay male community. Leather lesbians had their own circles. Sometimes the men’s and women’s communities intersected, although primarily on the men’s turf and terms.

For many years the predominant archetype of the gay male leather community was the hypermasculine leatherman, the “Tom of Finland” type. The predominant archetypes for leatherwomen were “Dykes on Bikes” (butch) and biker babes (femme). These archetypes still are prominent and respected in today’s leather community; the new Mr. Minneapolis Eagle 2018 titleholder identifies as a Sir, which is pretty traditional. But over the years the leather archetypes have been joined by other archetypes such as puppies (and now kittens), sports gear, furries, and “fierce” or genderqueer leather.

However, there was a time, around the turn of the millennium, when leather seemed to be aging. There were fears that the community was dwindling. I remember hearing discussion at that time among leatherfolk asking, “Where are the young people?” These conversations resulted in my writing a column in 2002 (Lavender #194) about “the next generation of leather.” Much of that column concerned tensions between the “Old Guard” (traditionalists) and the “New Guard” (those new to leather, many of whom were not aware of, or did not respect, leather’s history and traditions). Those labels now seem so last-century, don’t they?

In that column in 2002, I predicted that the next generation of leather “will do things differently, and their leather community will reflect them, just as today’s leather community is a reflection of us.” I also said in that column that leather “will continue to change and evolve. It won’t stay the same. If we try to keep it the same—if we don’t let it change—it will die. We will kill it.”

The leather/BDSM/fetish community, and communities in general, don’t grow and evolve according to a prepared plan. No “Council of Elders” dictates in advance how the leather community should, and therefore will, develop.

Leather has indeed changed and evolved since I wrote that column in 2002. Regardless of what traditionalists might wish, leather community and culture has evolved so that the reality of the leather/BDSM/fetish community today is leather plus assorted other interests. Do all these new archetypes or interests, and all the people attracted to them, make the community poorer? No. They—both the archetypes and the people—make the community broader, more interesting, more inclusive, more vibrant, and more alive. They also make the community stronger and more able to perpetuate itself.

“Where are the young people?” They’re here, they’re involved, and they are making the community their own, as is the natural order of things. Some of them are even entering leather contests and finding the courage to get up on a stage and proclaim, in very public fashion, their membership in and love for this community. Each of the contestants in the Mr. Minneapolis Eagle 2018 contest proudly represented themselves, and their version of leather, very well.