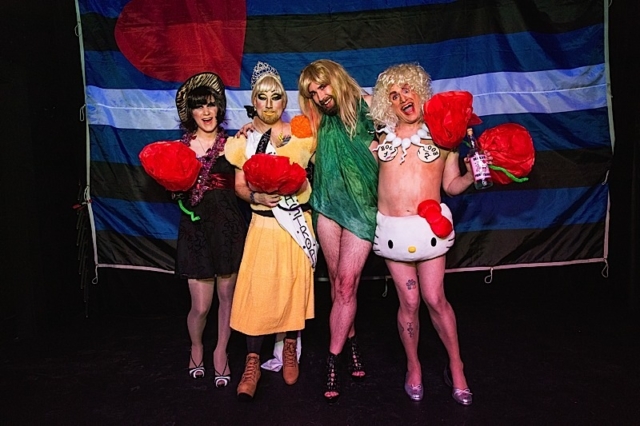 The evening’s four contestants at the conclusion of this year’s Ms Catastrophe contest. Photo by Andrew Bertke.

The third annual installment of the Ms Catastrophe contest, billed as “the best worst drag in Minneapolis,” happened Saturday evening, Jan. 7 at The Saloon. There were four male contestants who performed intentionally bad female drag. There also were some really good drag performances by the evening’s hostess, Steven Patton, as “Zekira Zabertini” and by one of the evening’s judges, Emerson Kellogg. Last year’s Ms Catastrophe, Karri Plowman, was on hand to judge, perform, and give a step-down speech. The biggest catastrophe of the evening, and therefore the winner of the contest, was Derek Harley, Mr. Minneapolis Eagle 2012. The evening was a fundraiser for Minnesota Leather Pride. Unfortunately this year, as with last year, we did not see any Mr Catastrophe contestants (women dressing up in male drag).

The evening’s four contestants at the conclusion of this year’s Ms Catastrophe contest. Photo by Andrew Bertke, Everett Allen Photography.

But what exactly were we watching that evening? Why did a large crowd of people come out for an evening of really bad female drag performances? What’s up with that?

Perhaps it all goes back to something sailors have done since ancient times. When a ship crossed the equator, it was customary and expected that there would be a “line crossing” ceremony, and that “pollywogs,” sailors who were “crossing the line” for the first time, would be initiated into the Society of Neptune by “shellbacks,” sailors who had crossed the equator on previous voyages. The shellbacks would dress for the ceremony in improvised costumes, many of which involved female drag, which figuratively “crossed a line.”

These ceremonies crossed another figurative line by often involving non-consensual hazing of varying degrees of brutality. In spite of this, the ceremonies were tolerated for centuries as a morale booster even though they might have been seen as scandalous. They were entertainment and a diversion from the burdens and stresses of a long ocean voyage. (Today, most navies do not allow line-crossing ceremonies to include physical attacks on pollywogs.)

Perhaps members of the early leather community were inspired by their experiences with these ceremonies during World War II, especially with the (bad) drag portion of the ceremonies. The drag shows that became a standard part of early gay leather/biker runs, and continue to be today, could possibly be considered an homage to the (bad) drag that was part of the “crossing the line” ceremonies.

Or perhaps early gay leather runs included drag shows as entertainment because many of the members of these clubs on the East and West Coasts worked in the entertainment industry (theater on the East Coast, films on the West Coast). The clubs therefore had access to the talents (costumes, makeup, choreography, and performing) necessary to put on a show.

It should be noted that a) the talent brought to the performances often resulted in a really good show rather than “bad drag,” and b) some men were not that thrilled by femininity in any form, including a drag show at a leather run. These men liked their leathermen as men, not masquerading as women. One of the earliest issues of Drummer Magazine featured on its cover a group of biker leathermen in drag called the “Cycle Sluts.” That issue turned out to be Drummer’s worst-selling issue ever, because the readers of Drummer wanted to see rugged men, not men in overblown female makeup.

There was another, perhaps newer, kind of drag at the Ms Catastrophe contest. Like several other recent leather events, Ms Catastrophe opened with a blessing by the Ladies of the Lake, a mission of the Sisters of Perpetual Indulgence. The “sisters” are men masquerading as “nuns” in whiteface makeup, whimsical wimples, and hysterical habits, an entirely different kind of feminine drag, neutered and spiritualized. Yet these sisters queer the usual image of nuns by preaching the virtues of lots of sex and lots of love.

Feminists, both lesbian and non-lesbian, might be offended at the idea of men in drag and say it’s disrespectful to women. In former years, many assumed that a straight man dressing up in women’s clothing was shameful because he was forsaking his supposed masculine superiority and adopting a weaker feminine persona, which is why, for instance, drag parties in pre-Stonewall New York City were often raided. Women who wore men’s clothing (such as Marlene Dietrich and her friends) also caused scandal, because who did they think they were? They were weak women trying to adopt a powerful male persona, and that was against the rules.

Now, in the days of greater sympathy (in some quarters, anyway) for transgender, gender-fluid, and genderless individuals, where does that leave drag performances? Perhaps drag, good or bad, illustrates just how much of a social construct the idea of gender really is. By laughing at it, drag performances call the idea of gender into question. This leaves people freer to express the gender they feel like expressing. And that’s not a bad thing.