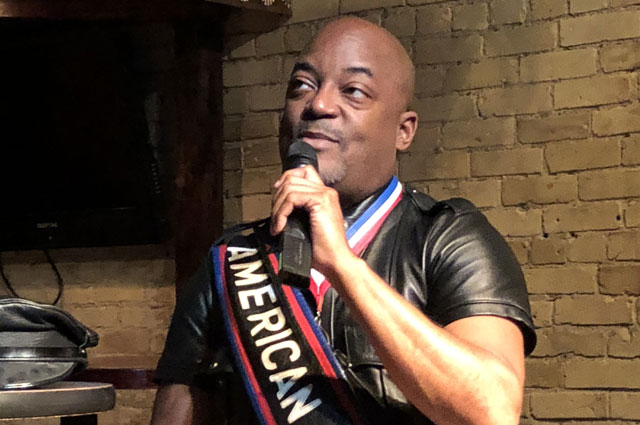 Notes on a Community Conversation

Mentoring in the leather community was the subject of a panel discussion and community conversation on Sunday, Aug. 12. The event took place at eagleBOLTbar, and was preceded by brunch.

On the panel were two community members who have extensive experience in mentoring. Rod McCoy, a.k.a. Rod Onyx, holds the American Leatherman 2017 and Leatherman of Color 2011 titles. He is the co-founder of the Mid-Atlantic Chapter of ONYX, where he served first as President and later as Pledge Master. Sir Randy Ingram-Lile is the current Mr. Minneapolis Eagle, current president of the Atons of Minneapolis, and a founding board member of North Star Kennel Club.

Moderating the conversation was Ivan Nunez, International LeatherSIR 2016. The event was organized by BLUF Minneapolis, a fraternal organization of men with an interest in leather uniforms. (BLUF stands for “Breeches, Leather, Uniform Fanclub.”) Several days after the event, I spoke with Nunez and Ingram-Lile about the discussion.

A mentoring relationship is one in which someone with more experience or knowledge (the mentor) guides or trains someone with less experience or knowledge (the mentee). Mentoring has been an important part of leather, on several levels, almost since the beginning of leather culture. For many years, mentoring was a way to pass important knowledge of how to do leather and kink activities—and, crucially, how to do them safely—from one generation to another.

Equally important was mentoring’s social aspect. Mentors showed mentees how the leather community functioned, helped them find their place in that community, and supported them as they integrated their leather experiences into the rest of their lives. Mentoring was instrumental in developing personal character and passing community values from one generation to another.

When I talked to Ingram-Lile, he described what he experienced when he was younger and being mentored: “Back then it was much more personal. There were no classes, there was no real organization where you could go and find out about things. There was certainly no internet to look up a subject. It was more who you knew, and who they knew.”

If someone wanted to learn about a topic that was not in their mentor’s area of expertise, that mentor probably had a friend with the proper knowledge. Through these community connections, mentees often benefited from the knowledge and experience of several mentors. According to Ingram-Lile, “That was simply the way we did things then.”

This style of mentoring was dealt a severe blow in the 1980s and 1990s when the AIDS crisis devastated the gay male community, and the leather community in particular.

AIDS interrupted the chain of mentorship by killing almost an entire generation of leathermen, who suddenly were not there to mentor the next generation and pass on their knowledge.

Today, all these years after those terrible times, the leather community is still reclaiming, rebuilding and adjusting the way it does mentoring. New types of mentoring have appeared and evolved. Mentoring in today’s leather community often takes the form of group activities such as classes, seminars, demonstrations and workshops— and, increasingly in the Twin Cities, community discussions such as this one.

But, as Ingram-Lile told me, “Everything can’t be taught in a class.” There still are many benefits to be gained from the personal connections that come with traditional mentor/mentee relationships.

Nunez, as moderator, told me he started the conversation by asking McCoy and Ingram-Lile how they saw themselves as mentors. Ingram-Lile told me he feels he has more experience with mentoring skills and techniques while McCoy, having been Pledge Master for ONYX for many years, has more experience with direct social mentoring. But, according to Nunez, both said they saw themselves as guides in helping develop both personal character and leather/kink skills.

According to Nunez, the conversation also touched on the responsibilities of both mentors and mentees. Both McCoy and Ingram-Lile said they were aware that mentors are role models and that they paid attention to how they engage with the community, always showing leadership through respect. By the same token, it also is appropriate for mentees to have an attitude of respect for their mentors and other community members.

Concerning the relationship of age to mentoring, Nunez told me that during the conversation Ingram-Lile noted that skills expertise can be developed at a young age. Character development, however, more often happens over time, and better mentors tend to have that experience gained over time. On the other hand, McCoy made the point that young people can also bring fresh perspectives to mentoring, and these di?erent perspectives can help older mentors to improve their mentoring skills.

McCoy further noted that while some mentoring relationships, such as the pledging process for his club ONYX, tend to be structured, there always is an organic and fluid quality to the relationship between mentor and mentee.

Ingram-Lile told me he believes that lack of mentoring might be contributing to the rate of suicides among GLBT youth—and that more effective mentoring may be part of the solution. When connections are made through mentoring, he said, “We realize we’re not alone, that there are people who have gone through [what we’re going through], and they have survived. And so the next generation can also.”