The weekend started Friday night, Feb. 15, with a “Meet the Candidates” event followed by a Black Party. The main event, the Mr. Twin Cities Leather Contest, took place Saturday evening, Feb. 16. The contest was followed by “LeatherBOMB!” A Victory Party” with DJ MF.

Sunday, Feb. 17 brought a Leather Brunch sponsored and prepared by Cuppa Java, followed by a victory beer bust. All events were held at The Saloon in Minneapolis, one of the weekend’s sponsors.

Saturday night’s contest and show included judged segments in leather image, onstage question and answer, speech, and talent. In the onstage question-and-answer segment, Truss was asked by one judge, “What are you most afraid of?” His answer: “In all honesty— this, right now,” referring to being onstage before the crowd at the Saloon.

Truss’ talent presentation combined a magic trick using a deck of cards with electrical torture featuring a big, industrial-strength, nasty-looking electrical switch. Rosengren’s talent portion was a demonstration of how to make the perfect banana split—using an accomplice’s bare chest as the serving vessel. To conclude his talent demonstration, Rosengren invited members of the audience to sample his ice-cream creation.

Emcees for the weekend were Karri Plowman, one of the three co-owners of Twin Cities Leather, and Camille Collins. Entertainment Friday and Saturday evenings was provided by Chanda Lehr. The entire weekend was dedicated to the memory of the late David Olaf Brown, a/k/a Danielle Charbonneau.

Another sponsor of the Mr. Twin Cities Leather weekend was Fuck Water lubes, many samples of whose products were handed out during the weekend. Lavender Magazine was the weekend’s media sponsor.

All photos by Steve Lenius. 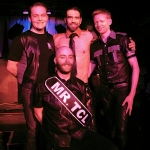 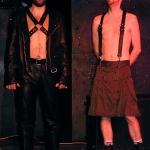 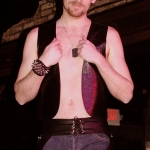 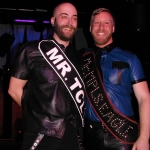 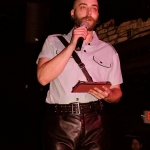 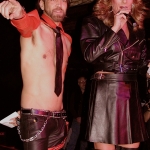 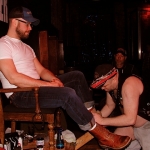 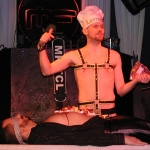 Tommy Rosengren demonstrates his talent with ice cream and fruit. 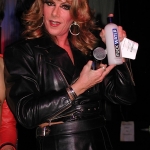 Camille Collins has a “Vanna” moment. 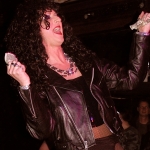 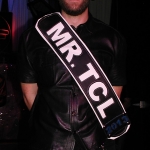