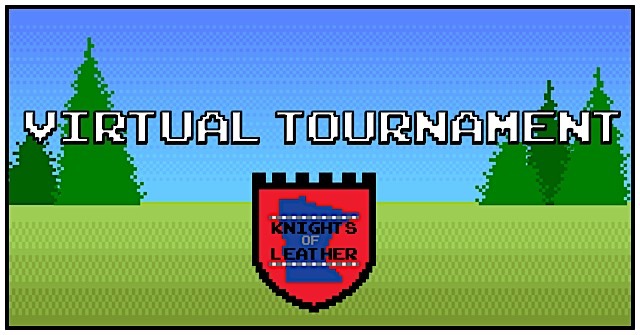 Courtesy of Knights of Leather

The Knights have held a total of 31 annual Tournament runs, each being assigned a number and an appropriate theme. The theme for Tournament 31, held in 2019, was “31 Flavors of Kink.”

However, due to the COVID pandemic, the Knights canceled Tournament in 2020 and in 2021. Because the Knights wanted to see everyone who usually attends their real-life Tournament runs, the club held a Virtual Tournament on Saturday, Aug. 28, 2021. (A Virtual Tournament had been planned for 2020, but it was postponed out of respect for the protests following the murder of George Floyd.)

A typical day at Tournament starts with breakfast for early risers. Virtual Tournament honored this tradition by starting with a virtual Early Riser breakfast. When I joined the virtual session at 9:30 a.m., I saw a member of the Knights busily cooking in a kitchen and giving a running commentary on what was being cooked. One camera was pointed at them while another, the “kitchen counter cam,” was pointed at the food being prepared.

Meanwhile, another camera watched another Knights member cleaning a backyard grill. The breakfast menu had been posted on the club’s website, and those watching were invited to cook along if they wished—although I didn’t see anyone doing so. Instead, we all just watched the Knights as they cooked. And we talked, and talked, and talked.

The Opening Ceremonies, which traditionally take place on Friday evening, were scheduled to start Saturday at 10 a.m. but were delayed due to some technical difficulties (which, fortunately, were solved by a computer restart). The Opening Ceremonies included an overview of the day’s activities. There was also a virtual Parade of Club Colors, with the names of leather clubs and organizations, both local and nationwide, being invoked.

Next on the schedule was the Virtual Newbie Tour. This was to be a virtual version of a Saturday-morning tradition at Tournament during which members of the Knights welcome first-time attendees, take them on a tour of the grounds, answer questions, and offer advice about the weekend’s events. However, because only one person at Virtual Tournament had never been to a real Tournament, the Newbie Tour turned into a chance both to reminisce about favorite features of previous Tournaments and to say what each of us was looking forward to when we could again attend Tournament in person.

Some items that people liked in the past, and look forward to in the future, were the well-equipped dungeons; the fabulous Saturday-evening banquet and the excitement of getting dressed for it; the social atmosphere and camaraderie in the dining hall; the demonstrations and educational sessions; and the overall energy, sights, and sounds at Tournament—as one person put it, “the things that get you going.”

One sentiment expressed by several different people throughout the day and evening was that arriving at Tournament “feels like coming home.”

Next on the day’s agenda was a noon discussion of “Unexpected Distance D/s (Dominance and submission): Testing Your Creativity.” As promised on the Knights of Leather website, attendees at the discussion shared how they have “coped with the emotions and (non-consensual!!) restraints created by this pandemic and how the unexpected isolation has affected us as Dominants and submissives.”

The final event of the day, at 7 p.m., was the Virtual Campfire. If you would’ve seen me on camera during this event, you would have seen three video screens in back of me all playing a “Roaring Campfire” video. Another group of attendees sat in a living room with a real fire burning in their fireplace. In the age of COVID, we do what we can with what we have.

Actually, even though it was Virtual Tournament, the Knights had a real campfire in a fire pit—until it started raining and they had to move indoors. But while still around the fire, the Knights elevated to the rank of Ambassador two long-distance associate members who have shown extraordinary pride in the club. They have done this by representing and promoting the Knights of Leather at events across the country, especially in remote areas. Appropriately bestowing honors and recognizing people is one of the traditional things the Knights like to do at Tournament, and it was good to see it included in Virtual Tournament.

As the evening continued, more memories and favorite moments from 31 years of Tournament were shared: people’s reactions during the Newbie Tour; cigars around the campfire; the long-running Kinky Crafts class; and the awards ceremony at Sunday-morning brunch, followed by the bittersweetness of goodbyes until next year.

Speaking of next year, everyone at Virtual Tournament said they were looking forward to the summer of 2022, when we hope we will be able to meet for Tournament 32—this time, in person and for real.