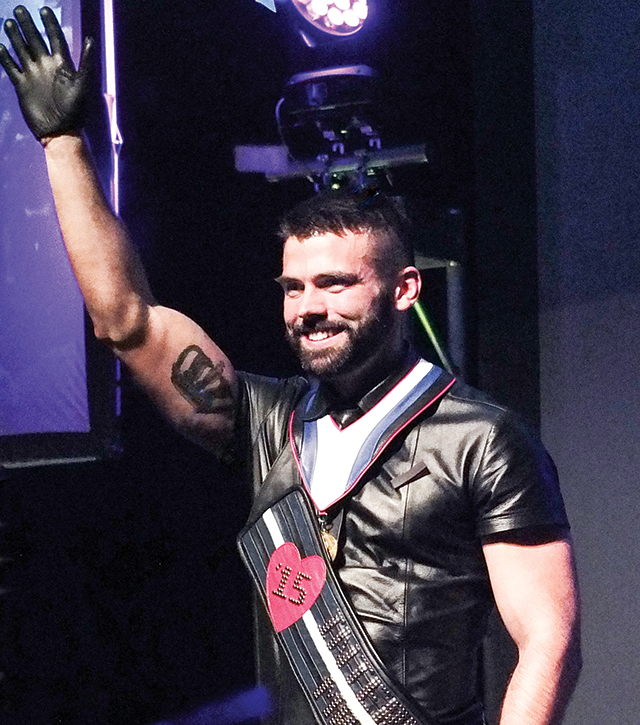 International Mr. Leather (IML) 2015 Patrick Smith recently traveled from his home in Los Angeles to Minneapolis to help judge the Mr. Minneapolis Eagle 2016 contest. While he was here I had the chance to ask him a few questions. 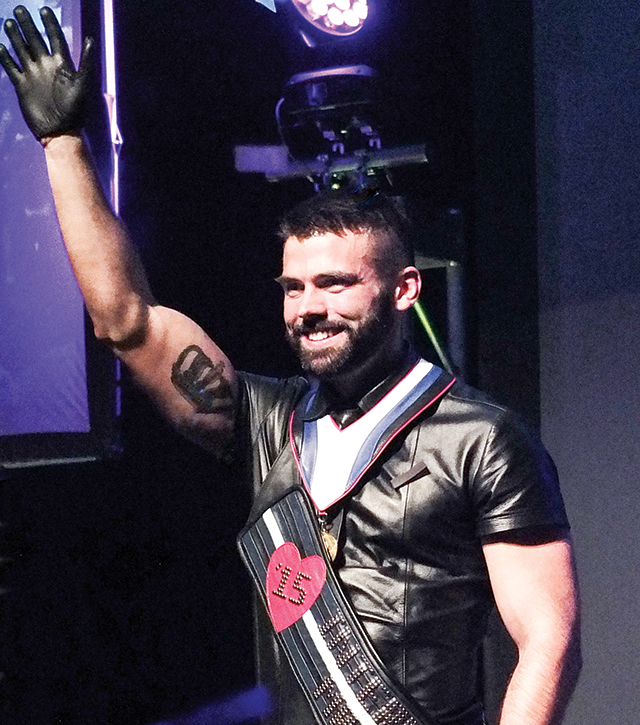 You grew up in Winnipeg?
Patrick Smith: Yeah, not too far from here. About eight hours north. I came from a great family. My parents have both been very supportive throughout my whole life. My mom was at IML to cheer me on.

When did you come out as a gay man?
PS: When I was 21. My mother was the first person I came out to. I had no intention of coming out to her when I did, but she can read me like a book. I was living in Ottawa at the time, and she called me just to say hi. I was going through something with a guy, and she sensed that something was wrong. I said it’s nothing, don’t worry about it, but she has this way of pulling it out of me. Eventually I just told her. One of my tattoos is the roman numerals of the date that I came out — the exact date of that whole conversation.

What made you want to have a tattoo of that date?
PS: It was probably the single biggest turning point in my life. That conversation on that day was the first moment when I felt comfortable in my own skin, expressing myself and identifying as a gay man. That was the point at which I told myself that I wasn’t gonna hide from people any more.

You were living in Ottawa when you came out?
PS: I was in Ottawa working in politics in the prime minister’s office. I was the assistant to Stephen Harper’s chief of staff. It was a really incredible experience to see how government and politics work from the very inner circle. I was there for a year and a half, then I spent four years working for the Conservative Party in Manitoba. I’ve always been very political. My grandfather had me out door-knocking for candidates when I was, like, nine years old.

What brought you to Los Angeles?
PS: I’ve always wanted to come to the United States and live here. I’d finished my undergrad degree and I wanted to get my MBA. I got into UCLA, I came down here and spent two years getting that degree, I fell in love, I got a great job, and I decided I wanted to stay.

And you were able to stay because you got married?
PS: That’s right. My husband Michael and I have been together for four years and married for two. We got married in Malibu on the Fourth of July, right after Prop 8 and DOMA were struck down. We were one of the very first gay couples to go through the immigration process together as a married couple.

Your thoughts on marriage equality?
PS: I said in my IML speech, I grew up in Canada and gay marriage was the only reality that I could remember as an adult. It was legalized nationwide in 2004, but in Manitoba it had been legal prior to that. I guess my reaction is, it’s a no-brainer, what took so long? Kudos to the Supreme Court Justices who took that step, particularly Justice Kennedy, and to the activists who pushed it.

And you were on the Supreme Court steps when the decision was handed down.
PS: I was! Like I said, I’m a political nerd. I felt like it was important for me to represent the leather community on the steps of the court. I reached out to the DC Sisters of Perpetual Indulgence, and they joined me there.

You also do work for the Point Foundation. Can you tell us about that?
PS: The Point Foundation makes sure that certain LGBT youth, who are troubled or have been displaced, can go to college. Education is very important to me, and it’s so heartbreaking to hear the stories about students who did well in high school, but they came out and their families rejected them. That’s something the Point Foundation helps address.

How has your IML title year been so far?
PS: It’s been great! The community has been very welcoming. One of the goals of my title year has been not just to go to places for parties or to judge contests, but also to go to places in the world where the gay community is still marginalized and to help bring awareness to that.

You’ve been to some places IMLs don’t usually go.
PS: I wanted to go to Africa, and I was doing research on which country I should go to, which is the safest, what were the gay-rights groups like in certain places. And eventually I just said, fuck it, I’m gonna go to Uganda. It’s one of the scariest places, but it was a life-changing experience. I met with a Nobel Peace Prize nominee, I met with a fellow who’s a high school principal who’s also a gay-rights activist — some really, really incredible people.

I went to Ukraine after Uganda, and that was a surprising experience. Following the revolution there in 2014, I expected things to be getting better, but things have actually gotten worse there for gay people. In the border towns, where the territory is still being disputed, pro-Russian terrorist groups are actively hunting down gay people. I met with some women in a shelter in Kiev who had to flee their homes in the middle of the night. And Crimea was a hotbed of LGBT tourism — think about it almost as the Ukrainian Fire Island. Can you imagine what it would be like if Russia annexed Fire Island tomorrow? They completely drove the gay community out of there. So I’ve been all over — it’s been a wide spectrum of experiences.

I’m glad you included Minneapolis among your travels.
PS: I came here a lot as a kid, being from Winnipeg — band trips and things like that, and trips to the Mall of America. So it feels good to be back.

Any other travel plans?
PS: I’m going to Trinidad next week. A lot of people are under the impression that in the western hemisphere things are pretty good, but the Caribbean is sort of the last vestige of some really heinous homophobia.

Who’s paying for all your travels?
PS: (laughs) You should see my credit card bill!

You’re underwriting it yourself?
PS: Mostly, yes. The humanitarian stuff and the political stuff, that’s all out of my own pocket.

You are a published writer.
PS: I had the honor of being published several times by The Advocate.

You also answered “Ask Me Anything” questions on the Reddit website. Were the questions what you expected?
PS: I had no idea what to expect. I felt like Reddit was a way to put myself out there, not just to the gay community, but to anybody reading who wanted to comment. There were one or two really homophobic comments that came up, but that’s fine. I like discussion, and I like debate, and that’s what we need to do more of to change hearts and minds.

What do you do professionally?
PS: I work for Marvel Studios. I am director of business development there.

Is Marvel supportive of your title and travel?
PS: Totally. They’ve been great, particularly in terms of flexibility and allowing me to work remotely while I’m traveling.

Have you thought about what you want to do after your year as IML?
PS: I definitely want to continue the humanitarian work I’ve been doing. There is so much work that can be done, and there are very few organizations out there that really support the international community. I’m also writing a book about my journey in the contest system and IML. Maybe I’ll promote the book a little bit after my step-down.

Last question: Has anyone suggested basing a Marvel character on you?
PS: (laughs) I wish! That would be nice. I think it would be a little too scandalous, though.