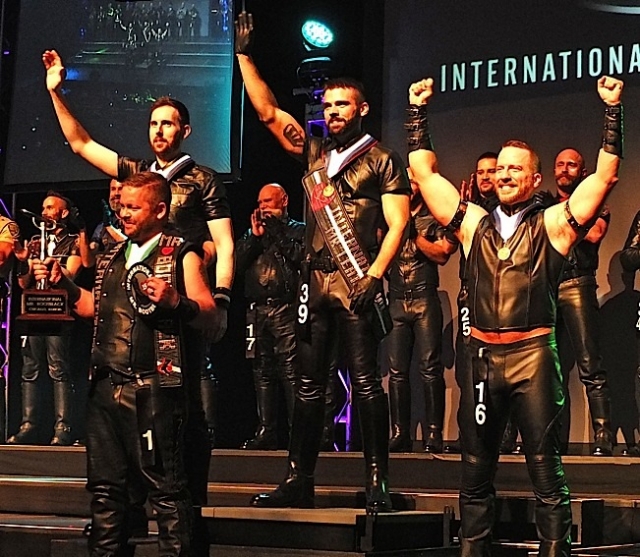 The International Mr. Leather (IML) contest, held every year in Chicago over the Memorial Day weekend, is always an intense weekend. This year, even more than usual, the 37th annual contest was full of emotional and affecting moments. This year’s weekend offered supreme heights of pride, exhilaration, and inspiration, including the first-ever marriage proposal made from the IML stage by a contestant. Unfortunately, the weekend ended on a note of sadness.

The weekend’s unofficial opening was a Thursday evening roast of last year’s titleholders International Mr. Leather 2014 Ramien Pierre and International Mr. Bootblack 2014 Scout. The roast took place in the Leather Archives & Museum’s Etienne Auditorium. In an IML first, Pierre and Scout actually ate dinner onstage while having stories told on them by friends who had been an important part of their title year. It’s not often one sees so much love and so much snark occupying the same stage. 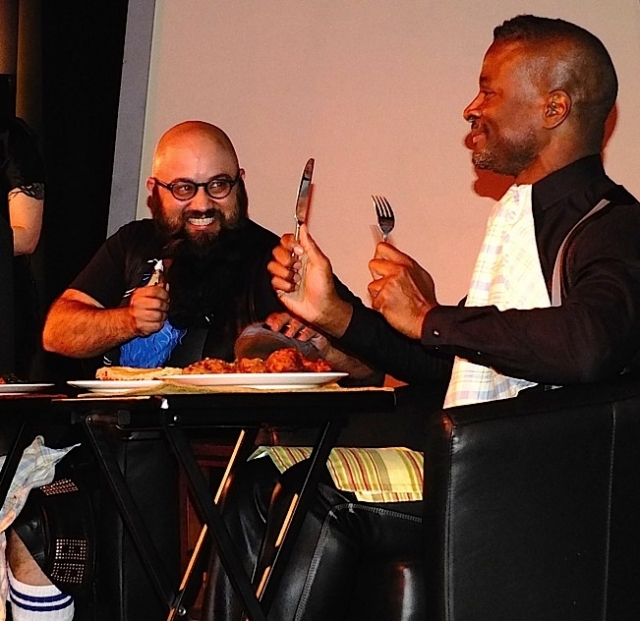 Roastees Scout and Pierre enjoy dinner while being roasted. Photo by Steve Lenius.

This year’s host hotel, the Congress Plaza, has been the setting for IML many times over the years, although not since 2000. The Leather Market, occupying the ornate ballrooms and plainer meeting rooms on the second and third floors of the hotel, was a great place to shop, people-watch, and, for me, to reminisce about past IML contests and Leather Markets. (Some vendors, including our own Twin Cities Leather & Latte, were lucky enough to have their own rooms this year instead of just a booth in a ballroom.)

According to the city of Chicago, IML annually draws 17,000 visitors to Chicago and funnels $15 million into the local economy. 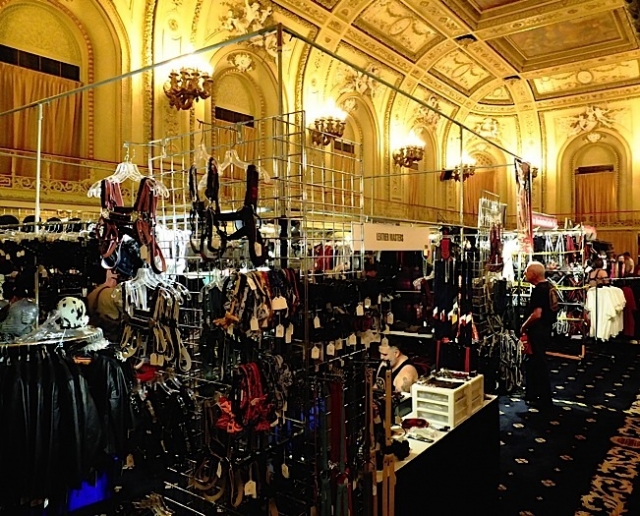 The official start of this year’s IML weekend was Friday evening’s IML opening ceremonies held at Chicago’s Park West Theater. All 52 of this year’s IML contestants, from 23 states and eight other countries (including, for the first time, a contestant from Chile), were first introduced while carrying or walking beside the flag of their state or country. Also introduced were the six bootblacks competing in this year’s International Mr. Bootblack contest. 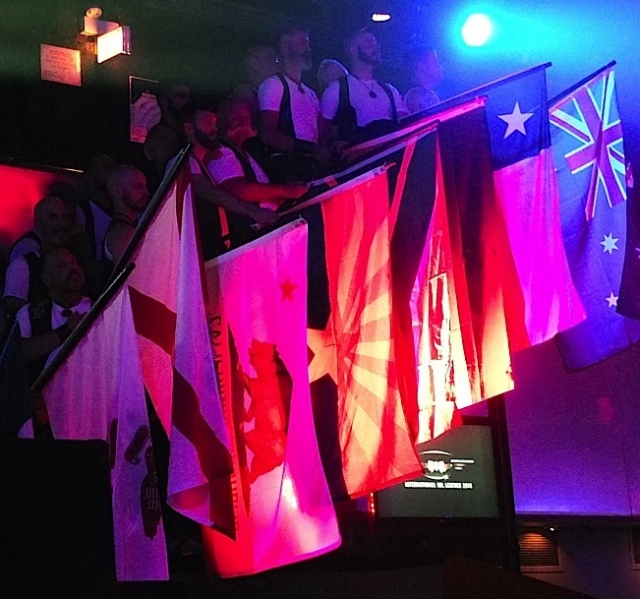 Every year IML founder Chuck Renslow, who is also president of the Leather Archives & Museum, hosts a President’s Reception for supporters of the Archives. At this year’s reception, members of Centaur Motorcycle Club of Washington, D.C. presented a check for $6,000 to the Leather Archives & Museum in support of the Archives and in recognition of the importance of keeping leather history and culture safe and accessible. 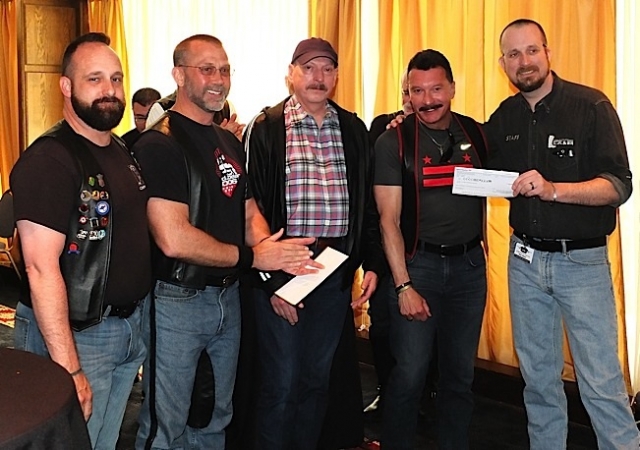 Members of the Centaur Motorcycle Club present a $6,000 check to Rick Storer (right), Executive Director of the Leather Archives & Museum in Chicago. Photo by Steve Lenius.

The IML crowd returned to the Park West Theater for Saturday evening’s physique prejudging event, also known as “Pecs & Personality.” All 52 contestants took the stage, dressed in as little as possible — that was the “pecs” part. Then, to show their “personality”, each contestant was asked a question based on information they had provided on their entry forms and then quickly tried to give an answer that was funny or sexy, or preferably both.

Steven Patton, Mr. Twin Cities Leather 2015, had the misfortune to be asked what is perhaps the strangest and most surreal question ever asked in the history of Pecs & Personality. His question had to do with (I am paraphrasing here) being sexually assaulted by a baby bison while volunteering at a wildlife nursery; the assault was caught on the security cameras; how would he explain this? The question appeared to perplex Patton as well as many in the audience. Finally, Patton responded: “Hi, my name is Steven, and I literally can’t even.” The audience applauded. 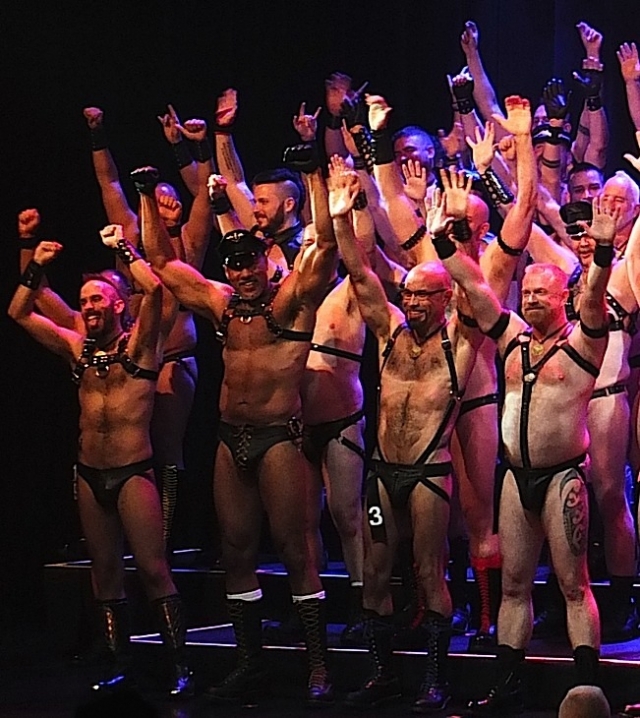 On Sunday afternoon some of the many Minnesotans who had traveled to Chicago for the IML contest gathered in the lobby of the Congress Plaza Hotel for a Minnesota group photo. 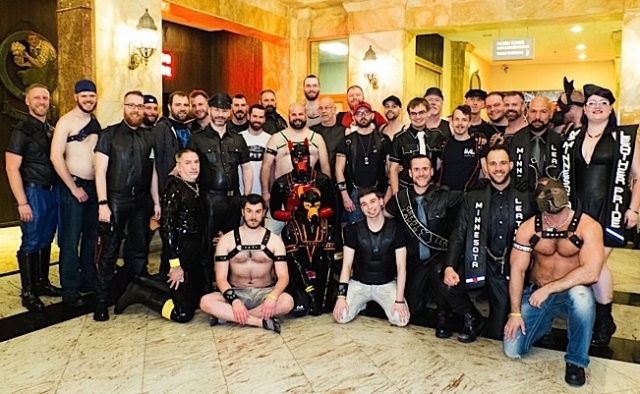 Some of the many Minnesotans who traveled to Chicago for IML. Photo by Steve Lenius.

The climax of the weekend, the IML Contest and Show, took place Sunday evening at the Harris Theater in Chicago’s Millennium Park. After all 52 contestants were introduced, three former IML titleholders announced the top 20 finalists (one of whom was Mr. Minneapolis Eagle 2015, Ren Rushold).

Each finalist then was judged on physique and leather image and presented a 90-second speech. The speeches often were emotionally intense as the contestants spoke from their hearts about topics including same-sex marriage, GLBT oppression in countries such as Russia and Gambia, male rape, HIV stigma, bullying, and suicide. Earlier, on Friday and Saturday, the judges had conducted private one-on-one interviews with each contestant; Lenny Broberg, IML 1992 and the weekend’s emcee, commented that “based on the speeches I can only imagine the interviews.”

Here are a few other memorable moments from this year’s contest:

• The mothers of three contestants, and the sister of one contestant, were in the IML contest audience.

• Hermann Groenewald, Mr. South Africa Leather 2015, started his speech by saying, “I bet most of you didn’t think you would see a man of my age cross the stage tonight. I probably bought my first leather before most of you were born.” White-haired with a handlebar mustache, by the time he had finished his speech he had won the hearts of much of the audience. 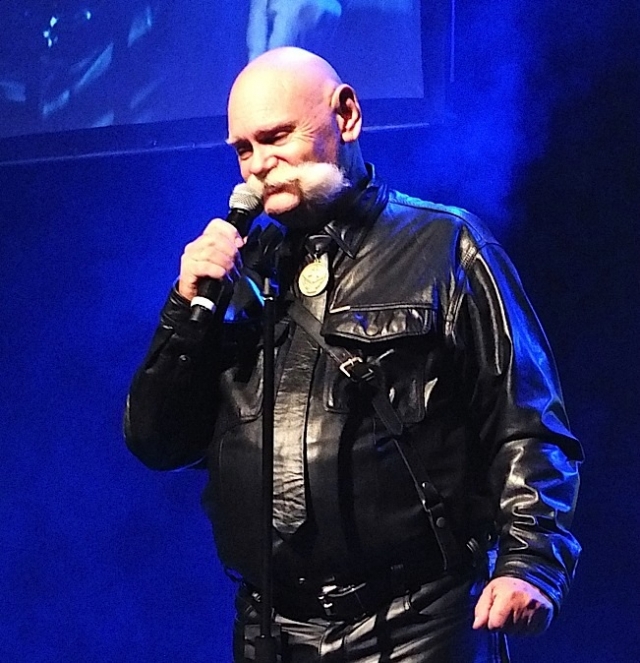 • Pup Tugger, Mr. Phoenix Leather 2015, caused controversy, but also admiration, throughout the weekend by appearing onstage in a corset, a cape, a fur stole and high boots with stiletto heels (and he knew how to walk in them, too). In his speech he said, “I want every faggot, I want every ladyboy, I want every poodledog, to know that they can be themselves. People are going to look. Give them something to look at.”

• On May 22, two days before the IML contest, the country of Ireland had held a referendum approving same-sex marriage. In a history-making IML moment, during his speech Kevin Murphy, Mr. Leather Ireland 2015, knelt on one knee, held up an engagement ring and said: “Tonight I can stand proud as an Irish leatherman and say these seven words: Robert, my love, will you marry me?” 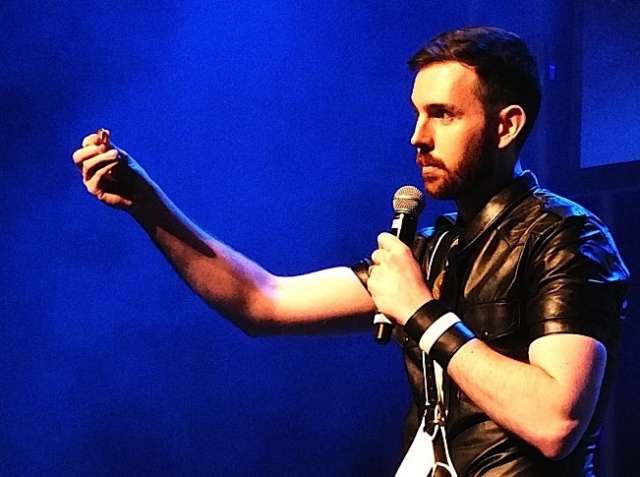 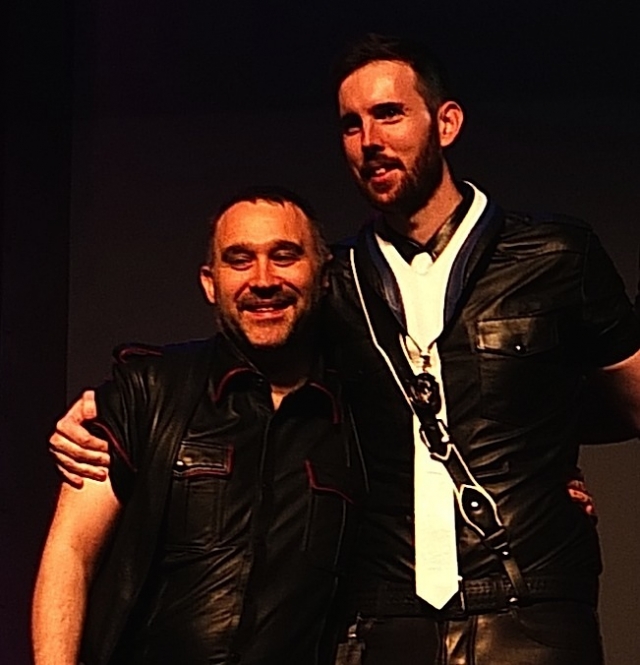 When the speeches and physique judging were over, it was time to announce the evening’s new titleholders. First announced was the new International Mr. Bootblack 2015: Bamm-Bamm, from Phoenix, Arizona. IML second runner-up honors went to Brian Donner, Mr. Tri-State Leather 2014 from Cincinnati, Ohio. IML first-runner-up honors went to Kevin Murphy, Mr. Leather Ireland 2015. And the new International Mr. Leather is Patrick Smith, Mr. Los Angeles Leather 2015. (Smith’s and Donner’s mothers were in the audience to see them take their place on the winners’ podium; after the contest they were invited to the stage to be photographed with their sons.) 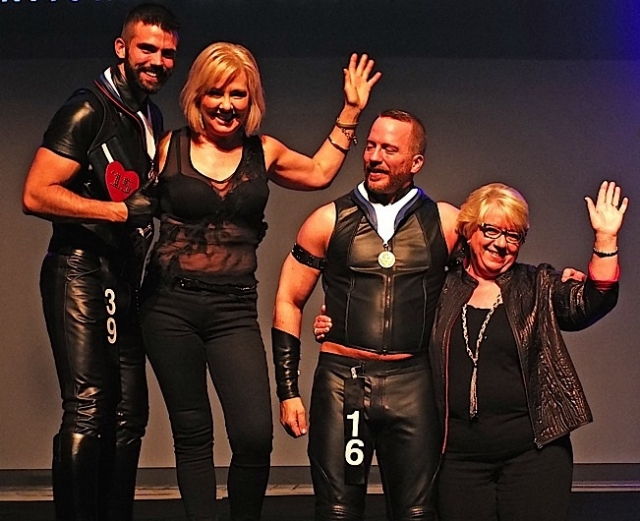 Sadly, the normally celebratory atmosphere of the Monday after an IML contest was overshadowed this year by news about one of last year’s IML contestants: Greg Slaven of Indianapolis, Ind., who held the titles of Mr. 501 Eagle 2014 and Mr. Olympus Leather 2012, had taken his own life at his home Sunday night. The news of Slaven’s passing left many weekend attendees shocked and saddened, and put an even stronger focus on the need for suicide awareness and prevention within the GLBT and leather communities. 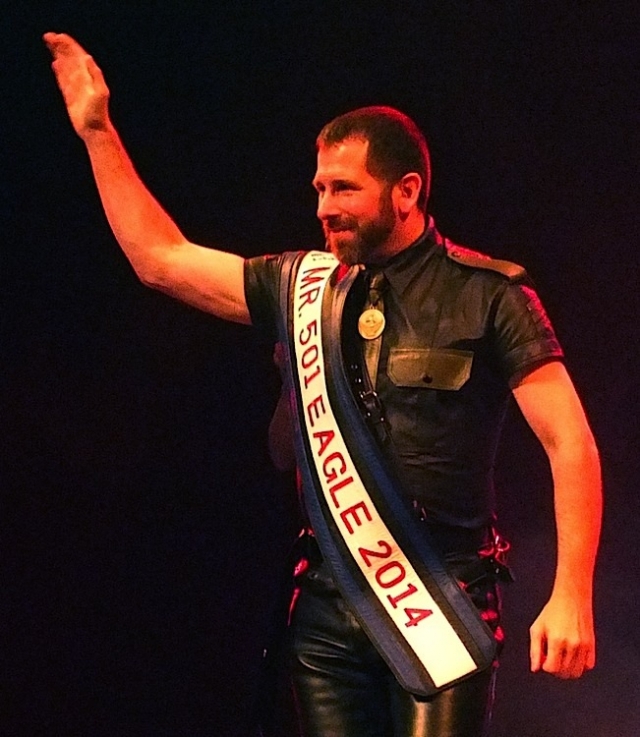 The late Greg Slaven competing in the 2014 IML contest. Photo by Steve Lenius.