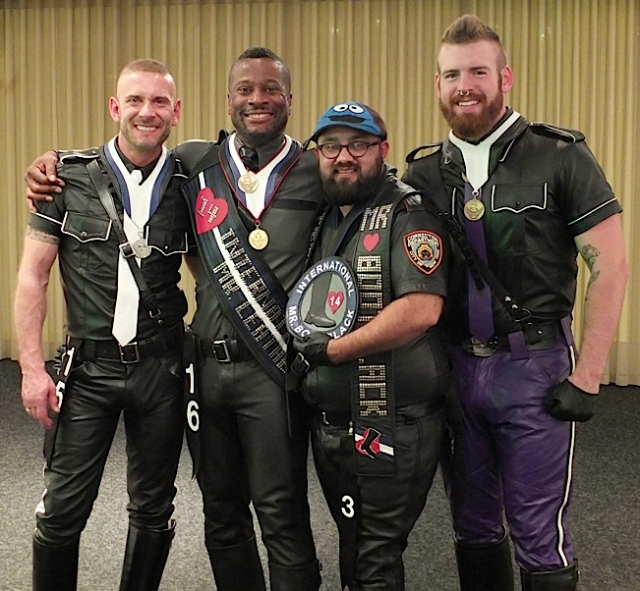 The 36th edition of the International Mr. Leather (IML) contest weekend was held May 22-26, 2014, in Chicago. This was the 21st time your humble columnist has attended. In those 21 years I have seen many changes to the event. Yet the basics—masculine men in masculine attire, who also happen to be great guys with noble hearts—have remained the same. No wonder I keep coming back every year. The following is my impressionistic take on the 2014 IML weekend’s events.

When the IML first and second runners-up are two of the people doing the roasting, fireworks are almost assured, and the evening does not disappoint. The knives are out and the claws are sharpened. Sacred cows are gored, secrets are betrayed, and canonical leather beliefs are blasphemed.

No one escapes unscathed—the titleholders being roasted, the people on stage doing the roasting, some people in the audience, and even a few people who weren’t even in attendance. But it’s all in good fun and all for a good cause (the event benefits the Leather Archives & Museum). Along with the bitchiness, there is an awful lot of love on that stage.

Friday Evening
All 46 of this year’s contenders for the International Mr. Leather title are introduced at the official IML opening ceremonies. Then it’s time to party. The entire fourth floor of the hotel has been turned into Leather Central for the evening. While a silent auction benefiting the Leather Archives & Museum goes on in the hall, three ballrooms are filled with revelers at the San Francisco Party and Gear Blast. Approaching one of the ballrooms, I’m hit by blasts of both body heat and thumping sound waves.

Inside I see men in unitards, latex, leather aprons, sports gear, plush-headed cartoon costumes, kilts, harnesses, jocks, fatigues, spandex, cowboy gear, superhero suits, adult “boys” and human “pups” on leashes. The tribe is enjoying itself. I see all ages and all body types, and everyone seems to respect everyone else—it’s all good.

The music is not as loud as it has been in years past, so conversation is possible. I meet some men from Minneapolis and ask them if they have been to the Leather Market yet. They reply, “Only for necessities.”

I work my way down to the hotel lobby to see what’s going on there. The elevators are slow and infrequent and crowded with their own kind of (hot and sweaty) fun. The lobby is crowded, too. A table holds printed promotional flyers for vendors and events, but the table is half the size it has been in years past—perhaps more promotion is being done online? Next to the table is a cardboard box the size of a 55-gallon drum, and it is half-filled with condoms. (Tomorrow I will see two men refilling the box to the brim.)

Saturday, Leather Market
I run into a gentleman who is attending IML for the first time, and he is blown away by the size of the Leather Market. “I was expecting maybe a dozen vendors set up in the lobby,” he says. Instead he found a Leather Market filling two hotel ballrooms on the fifth and seventh floors of the host hotel (with an express escalator between the two floors). The Market is filled with 120 vendors selling all manner of leather and fetish goods. There is the expected (leather apparel, boots, paddles) and the unexpected (impressive iron dungeon beds and slings made from truck tires). The Leather Market welcomes 6,000 visitors each day it is open.

Saturday Afternoon
History is made as IML founder and Executive Producer Chuck Renslow officiates at the first legal same-sex wedding ever held at IML.

Sunday
This year’s IML Contest and Show is held at the Harris Theater for Music and Dance in Chicago’s Millennium Park. The 46 contestants are introduced and then, based on preliminary judging, the top 20 finalists are announced. Each of the finalists shows his serious side by making a 90-second speech while dressed in formal leather. Each contestant also shows his playful side by getting a chance to own the stage and seduce the audience while wearing as little leather as possible.

While the judges’ scores are being tallied, the IML audience is entertained by—a string quartet? Yes, but the group, Well Strung, is not just any string quartet. Dressed in leather and displaying impressive physiques, these four classically trained musicians sing four-part boy-band harmonies while accompanying themselves on two violins, a cello, and a viola. The audience absolutely loves them—I even hear many audience members singing along.

In the theater lobby after the contest, and on the bus back to the hotel, I see people tapping out the news of the contest results on their jungle drums (also known as mobile phones). Once again, the tribe has a new leader for the year. Let the party continue.