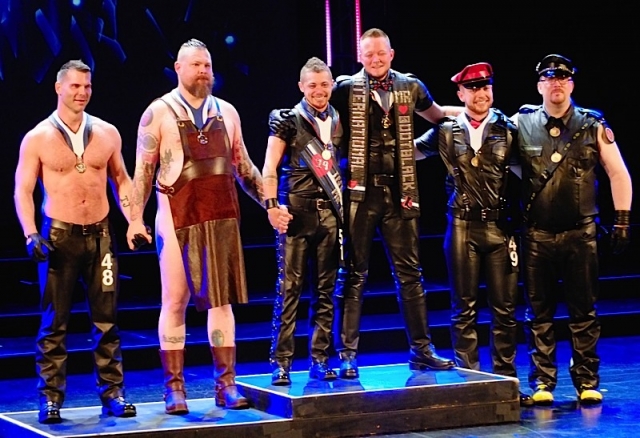 Shortly before Thompson was sashed, Kriszly de Hond, a bootblack from The Netherlands, became the 27th International Mr. Bootblack titleholder. De Hond noted in his contest speech that European bootblacks often do not have safe working conditions, sometimes are erroneously thought to be slaves, and are often kicked, abused or disrespected. He said he wanted to work to create better working conditions and more appreciation for bootblacks in Europe.

Minnesota was represented among the IML contestants by Tommy Rosengren, Mr. Minneapolis Eagle 2019, and Kurt Patton, Mr. Twin Cities Leather 2019—and many others from Minnesota made the trip to Chicago for the weekend to cheer for the two Minnesota contestants.

In many ways this year’s IML/IMBB weekend followed a traditional and familiar pattern. The host hotel was, once again, the Congress Plaza. As in previous years, the contestants were introduced on Thursday evening—although the introductions took place in a new venue, the Feinburg Theater at VenueSix10, a block south of the host hotel. The “Pecs and Personality” Physique Prejudging event took place Saturday evening and the main contest and show took place Sunday evening, both in the Auditorium Theater at Roosevelt University.

As usual, the weekend offered many other activities besides the IML and IMBB contests. Friday evening featured an assortment of parties and other events including “Flashback,” a celebration of James Lee and Lucky Rebel, the outgoing IML and IMBB titleholders. On Saturday the Titans of the Midwest presented workshops on “Understanding Dynamics vs. Abuse in BDSM”, “Financial Domination”, “Recovery in Leather”, and a panel discussion featuring four visual/ performance artists from the leather/fetish community. In addition, receptions were held by groups including the Leather Archives & Museum, BLUF Chicago, Chicago Hellfire Club, Titans of the Midwest, and LORE (Leatherfolk of Recovery).

The IML Leather Market was bustling all weekend long. The usual well-known large vendors were there, but there also was a nice assortment of small, artisanal vendors displaying interesting and unusual leather and fetish-related goods.

Among all the comfortable familiar features of the weekend, however, were a few changes. There has been a trend in recent years toward increasing parity between the IML and IMBB contests. As part of that trend, this year the bootblack contestants were presented on Thursday evening along with the IML contestants; the judges for both the IML and IMBB contests were always introduced together; for the first time the bootblack contestants made speeches at the contest on Sunday evening in the same manner as the top 20 IML semifinalists presented their speeches; and, at the conclusion of Sunday evening’s contests, the new IMBB titleholder and runners-up joined the new IML titleholder and runners-up on stage for victory photos.

Many of the changes seen during this year’s IML/IMBB weekend were connected with the various kinds of evolving diversity within the leather/BDSM/fetish community. Some of the evolving diversity can be summed up by looking individually at each of the three words in “International Mr. Leather”: “International”—The weekend was international to an extent never seen before. Eighteen of this year’s 68 IML contestants, and one of this year’s four IMBB contestants, were from places other than the United States, including Australia, Belgium, Canada, China, the European Union, France, Germany, Ireland, Israel, Italy, Mexico, the Netherlands, Puerto Rico, Spain, Switzerland, and Venezuela. Many translators were called upon frequently throughout the weekend to translate onstage questions and answers.

“Mr.”—With binary conceptions of gender increasingly seeming dated or outmoded for quite a few people, and with the increasing presence of leather transmen, transwomen and other kinds of gender diversity in the community, what are we to do with the “Mr.” in International Mr. Leather and International Mr. Bootblack? Well, the IML contest has welcomed transgender contestants since 1998. At least two of this year’s IML contestants were transmen, and there were many more trans and gender-variant folks in the audience. I heard there was some sniping on social media, but in real life the crowd at this year’s weekend seemed to welcome, embrace and celebrate all the various shades and kinds of gender—masculine and others—on stage, in the audience, and around the host hotel.

“Leather”—The diverse personalities, nationalities and interests of this year’s group of contestants was mirrored and symbolized by what they wore onstage during the competition. They wore leather in black, brown, red, orange, turquoise, white, and yellow. They wore kilts, harnesses, chains and chainmail, jocks, goggles, cowboy hats, puppy hoods, a leather bootblacking apron, a bullfighting cape, and fur in the form of a mask, a stole and a wolf tail. One contestant used a wheelchair, and his was not the only wheelchair seen during the weekend.