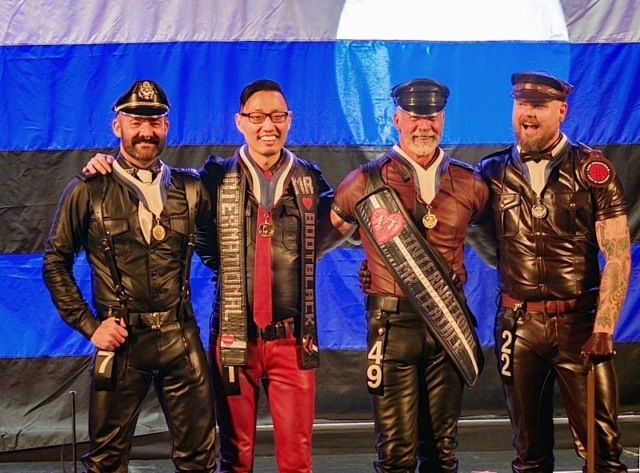 The 2017 International Mr. Leather (IML) and International Mr. Bootblack (IMBB) contests were held concurrently Thursday, May 25 through Monday, May 29 in Chicago. Host hotel was the Congress Plaza. The contest venue was the Auditorium Theater of Roosevelt University, conveniently across the street from the host hotel.

This year’s IML contest was the 39th and included 63 contestants, the most ever. The IMBB competition celebrated its 25th anniversary with three contestants. The weekend attracted over 15,000 visitors to Chicago and generated over $15 million in tourism revenue for the city.

Minnesota was represented by Eric “Pup Omega” Stafford, Mr. Minneapolis Eagle 2017, and Ryan Coit, Mr. Twin Cities Leather 2017. Coit was selected as one of the top 20 finalists. Making a surprise appearance helping to announce the top 20 finalists during Sunday’s contest was Kevin Cwayna, who was Mr. Minnesota Leather 1997 and brought the International Mr. Leather 1997 title home to Minnesota.

For the first time in 39 years, IML co-founder and executive producer Chuck Renslow was unable to be present to welcome IML attendees because he was under doctor’s orders to rest (Renslow watched the contest at home via Skype). Renslow’s traditional welcome speech at the opening ceremonies was given by former IML executive director Jon Krongaard, while Renslow’s speech during Sunday evening’s contest was delivered by Joe Cervantes, a member of Renslow’s family.

The Leather Archives & Museum (LA&M) was prominent during the weekend. At Saturday morning’s Chairman’s Reception the Centaurs MC of Washington, DC presented the LA&M with a check for $40,000, part of which will be used to establish an endowment. It was also announced that Rick Storer, LA&M executive director for 15 years, will be leaving and that Christina Court will serve as interim executive director until a new executive director is selected. The LA&M later hosted a screening of Court’s new video, By The People: 25 Years Of Community Archiving at Leather Archives & Museum, which recently won a CineKink award for Best Documentary Short.

For the first time at IML, the Titans of the Midwest presented three Kink U sessions. The first, especially for IML newbies, was a panel discussion on “What is IML, anyway?”. This was followed by a leather history presentation by Rick Storer about Tony DeBlase, creator of the leather pride flag. The final presentation was “Changing Perspectives,” another panel discussion looking at leather through the eyes of pioneering “femme” personalities, one of whom was Emerson Kellogg, Mr. Twin Cities Leather 2016.

Throughout the weekend the famous IML Leather Market offered merchandise from over 50 vendors, including local favorite Twin Cities Leather.

Next year will be IML’s 40th anniversary, and the host hotel again will be the Congress Plaza in Chicago.