The Minnesota Leather Pride Weekend 2019 main event came Saturday night at Lush. The evening was fun and momentous as we welcomed in the four new 2019 winners. Photo by Andrew Bertke. Feel free share these photos and tag yourself and friends. More can be found at https://www.everettallenphotography.com/mnlpcontests2019/789179559/appstart.html

The MNLP titles are owned and sponsored by the community. For this fifth year of these titles, the contest weekend was moved from April to August. Also for 2019, the three existing titles (Minnesota Leather Sir, Minnesota Leatherboy and Ms Minnesota Leather Pride) were joined by a new title: Mx Minnesota Leather Pride, the first gender-non-binary title in Minnesota. (Mx, pronounced “Mix,” is an gender-neutral honorific used in place of Mr. or Ms for those not identifying as being of a particular gender.)

But this jam-packed weekend included much more than four separate concurrent leather title contests. On Friday evening, The Saloon hosted three events: the MNLP contest meet-and-greet gathering (emceed by Angie and Boy Woody), followed by a Twin Cities Rubberman social, followed by Leather Night at The Saloon. On Saturday at The Saloon, the weekend’s contestants participated in a community panel discussion moderated by Ryan Brown (Mr. Minneapolis Eagle 2013).

On Saturday evening, the action moved to LUSH, starting with a BLUF Minneapolis monthly uniform social before the evening’s contests. A Saturday-evening victory party at Lush after the contests was combined with a cigar-smoking party presented by the Atons of Minneapolis on the Lush patio. And Sunday’s victory brunch at Lush was combined with Sundress Sunday, presented by the Twin Cities girls of Leather. 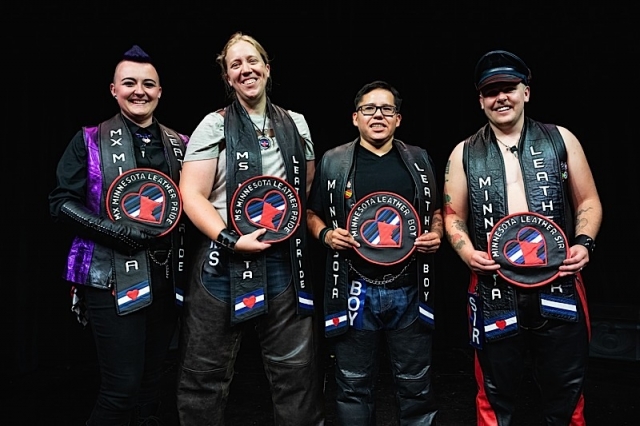 Saturday evening’s contest at LUSH drew a crowd of at least 150 people, according to a representative of MNLP. The contest started with the traditional blessing by the The Ladies of the Lakes, a fully professed house of the Sisters of Perpetual Indulgence. The blessing was followed by an opening number by Slaymantha Fox, the evening’s emcee.

Judging categories for each contest were: private interview with the judges (held prior to the contest at the DoubleTree Suites Downtown Minneapolis, the host hotel for the weekend); contestant speech; fantasy performance; physique/pop question; and “social.”

Contestant speeches touched on topics including community history and growth, the importance of service as a pillar of the community, and the importance of making the community “radically welcoming” to everyone. Fantasy performances included a dramatization of gender-fluid sexuality (Rylee Sickmann), a superhero scene (Britt Sickmann), a construction worker and a sexy television show that becomes real (Monica Malone), and a Native American folk tale (Ray Charging Hawk).

According to MNLP contest rules, just because a title has only one person competing for it does not mean the title is automatically awarded to that contestant. A contestant with no challengers must earn enough judging points to qualify for their title. For each 2019 MNLP contest the maximum points possible was 460; contestants had to earn a minimum of 277 points (60 percent of available points plus 1 more) to be awarded the title. Happily, all of the 2019 contestants met that threshold and all four titles were awarded.

Of the evening’s four new titleholders, two are out-and-proud members of the trans community and one is gender-non-binary. Also of note, and another first for Minnesota: Two of the new titleholders, Rylee and Britt Sickmann, are a married couple. 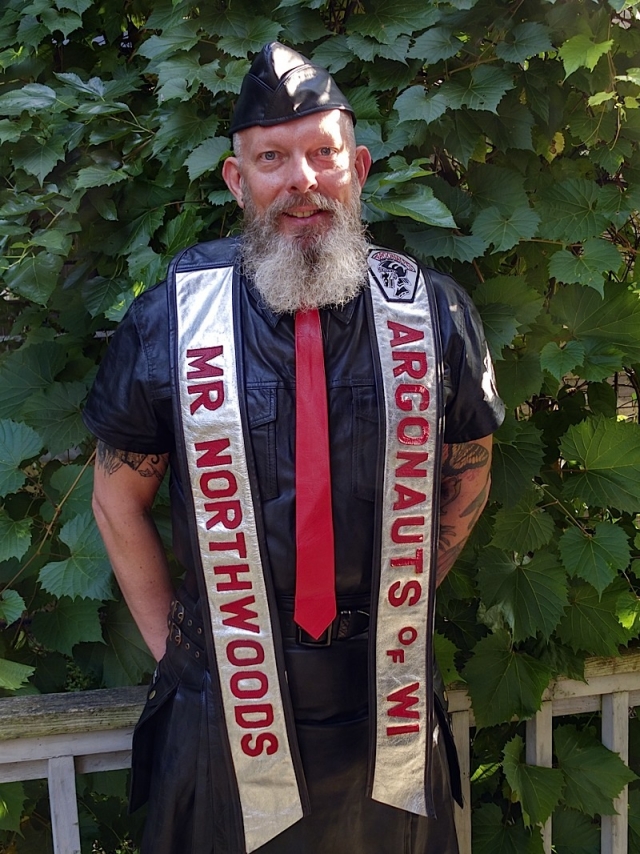 There also is a fifth new Minnesota leather titleholder, although of a Wisconsin title. On the evening of Aug. 17, 2019, Allan Dahl became the new Mr. Northwoods 2019-2020. Dahl is a member of the Black Guard of Minneapolis.

The title was awarded at the Mr. Northwoods Contest, part of the annual Northwoods Campout presented by the Argonauts of Wisconsin. This year’s campout celebrated the 45th anniversary of the Argonauts, Wisconsin’s oldest GLBT organization.

As Mr. Northwoods, Dahl will compete in next year’s International Mr. Leather contest.