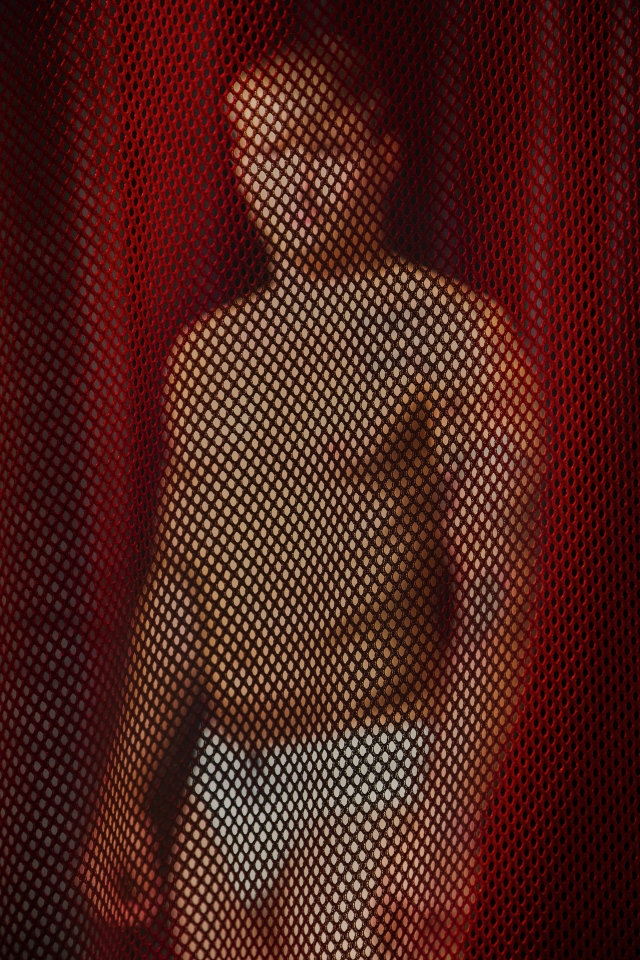 An Interview with Christopher Selleck, Artist and Photographer

Christopher Selleck is an artist who uses photography and other forms of art to explore what he calls “the terrain of masculinity.” His artwork has been displayed at Twin Cities Leather & Latte, and in 2018 he had a one-man show called “This is a Record” at SooVAC (Soo Visual Arts Center) in Uptown Minneapolis. He is a 2019 Minnesota State Arts Board grant recipient. 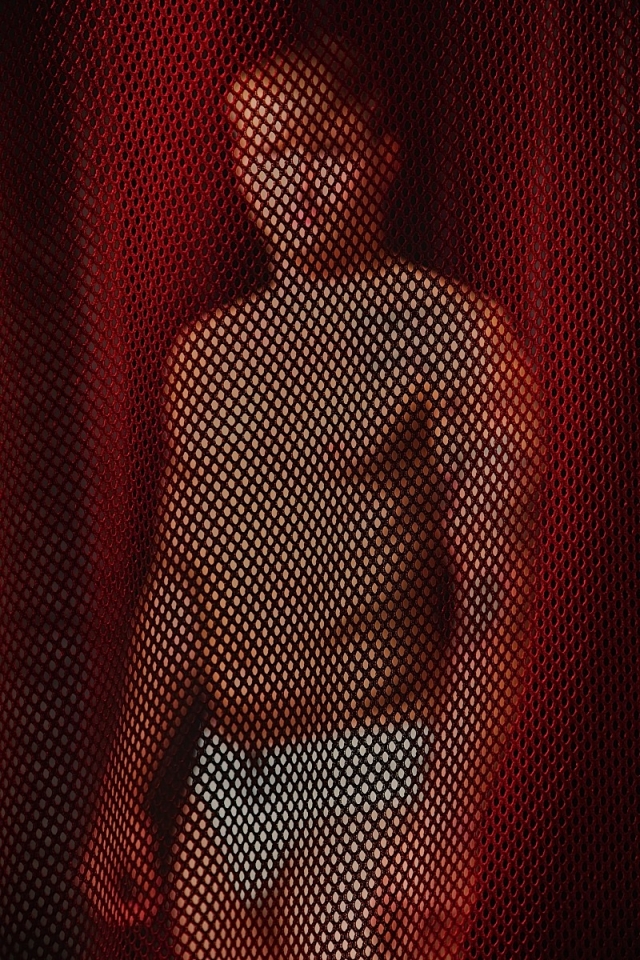 I interviewed Selleck in his studio in Northeast Minneapolis. Hanging on a wall in his studio was “Male Veil 7”, the photograph shown on this page, which is part of his “Male Veil” series of photographs. (Interview has been condensed and edited.)

What made you want to explore masculinity through art?
Christopher Selleck: It came from being bullied—running home and saying this guy was trying to beat me up, and my dad’s like, “What are you doing here? Get the fuck out there and be a man,” and me not really knowing what “being a man” meant or looked like.

I’ve always said that as a gay man, I’ve been an outsider to masculinity. There’s something interesting about being able to look, as an outside observer, at the different ways men present themselves—these ideas of masculinity and hypermasculinity, as they relate to team sports or other areas that traditionally have been male-only.

There is this inherent intimacy that’s really prevalent in a lot of sports and athleticism, and it’s policed through the use of homophobia. Masculinity is preserved, in a way, by saying “Oh, I’m not gay” to buffer that space between two men. If you think about wrestling, I can’t think of a much more physically intimate sport, but there’s also, in a weird way, that psychic space between athletes. Brian Pronger, in The Arena of Masculinity, describes: “Homophobia is used as a way to keep the implicit from becoming explicit.” So you’re policing that edge of men together in that intimate space by the idea of, “Oh, you’re not a faggot, are you?”

When you look at this picture (“Male Veil 7”)—a young white male, he’s got tattoos, he’s in a jockstrap, he is standing in front of a dark background and is being photographed through a red mesh screen to reference the mesh of sports uniforms. So we’re seeing the detail of the screen, the body is a slight blur, but you’re still able to recognize the physicality of his body as being presumably male.

There’s always a secondary read to my work, I think, if you come to it as a gay or queer person. You might pick up on subtleties and different readings of the work. I love that there’s that ambiguity that allows for a broader interpretation, instead of having it be pigeonholed as “queer art” and interpreted only through that lens. 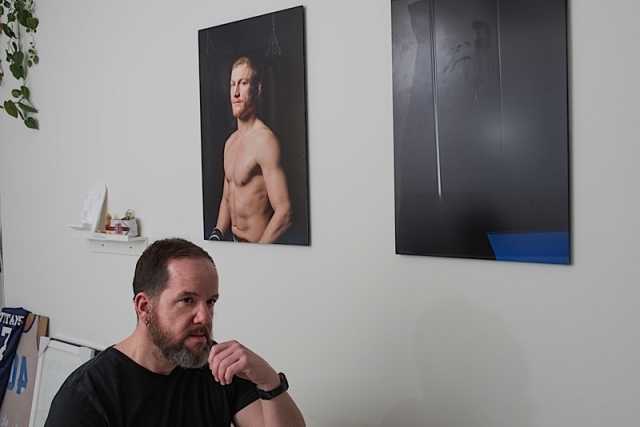 How do gay men react to your art?
CS: I think gay men recognize the beauty of the male body. Some men look at it and they’re attracted to it. But there’s also this thought, maybe from the way we’re brought up, that says, “Oh, but I’m not supposed to like this.” Culturally, we’ve been trained or taught to not look at or appreciate the male body as being beautiful. I think there are subtleties to all bodies, and looking at this figure in this photo tries to bring that into the foreground.

You also have a fair amount of women collectors of your art.
CS: I think heterosexual women love looking at a beautiful male body, in the same way that gay men do. And maybe they’re more open to the idea of potentially having something like this hang on their wall, where I feel—and this is not 100% true—but I’ve met plenty of gay men who say, “Oh, I love this, but I could never have this in my house.”

How do straight men react to your art?
CS: I think it really depends on where they come from culturally—how old they are, and whether they grew up in a small town, which can make their worldview much smaller than that of a straight man who was maybe more worldly or more open.

What about gay men who are proudly effeminate?
CS: I think I’m probably a little too lazy to be that fabulous. But just because I don’t want to wear makeup doesn’t mean I don’t think someone else shouldn’t be able to. If you’re feeling empowered by wanting whatever you want, yes, go, do it, be fierce. I’m not trying to say with my art that this is what being a man looks like, fall in line or get the fuck out—that’s definitely not what I think this is about.

Selleck will be showing part of the work from “This is a Record” in a show called “Queer Forms” next fall in the Katherine E. Nash gallery at the University of Minnesota.