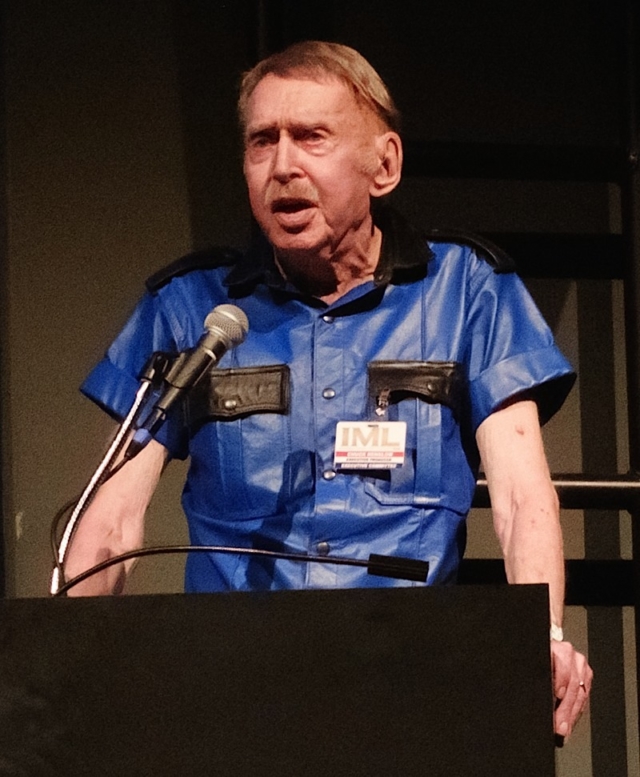 Chuck Renslow addressing the audience at the International Mr. Leather contest on May 29, 2016—the last time he was able to do so. Photo by Steve Lenius.

Leather- and GLBT-community Pioneer and Leader

Chuck Renslow, a pioneering gay leatherman, photographer, publisher, business owner, and community activist who became a legend in the Chicago area and around the world, passed away at the age of 87 on June 29, 2017, in Chicago.

Renslow made many significant contributions to the development of the culture and community that came to be known as “leather,” a shorthand for the leather/BDSM/fetish community. Today Renslow is perhaps best known as the founder and executive producer of the International Mr. Leather contest. Readers also may know him as one of the co-founders of the Leather Archives & Museum. But these are only two of Renslow’s many notable accomplishments during his long and active life.

Charles George Renslow was born on August 26, 1929, in Chicago to George Elroy Renslow and Charlotte Ross. However, his mother later discovered his father was a bigamist, so after the age of three Renslow was raised by his mother and maternal grandmother.

While still in high school Renslow discovered he was attracted sexually to men. Subsequently, and unusual for the era, he was able to live his life as a gay man without guilt, shame, or remorse. In 1953 Renslow met and fell in love with Dom Orejudos, an artist, dancer, and choreographer. Renslow and Orejudos became the nucleus of the Renslow Family, a family of choice exploring alternative relationship styles (what today is described on Facebook as “It’s complicated”). Over the years the family included both their mothers and Orejudos’ brother as well as other friends, lovers, and partners. Sadly, Orejudos died in 1991 and many other family members died young due to AIDS, accidents, and other causes.

After being a member of his high school’s camera club, Renslow later pursued further photographic education and eventually opened a photo studio to supplement the earnings from his full-time job at a drug store. The photo studio evolved into Kris Studio and published catalogs and “physique” magazines featuring Orejudos’ art (under the pseudonyms “Etienne” and “Stephen”) and Renslow’s beefcake photography. In 1958 Renslow and Orejudos became owners of the Triumph Gym. The gym provided Renslow with a continuing supply of muscular models for his photography and also led to his running several bodybuilding title contests.

Also in 1958 Kris Studio was raided and Renslow was charged with sending obscene materials through the mails (because his photos contained “excessive genital delineation” through the posing straps on his models). Renslow, unlike some other physique photographers, fought the charges and eventually was exonerated. In 1966 he was arrested again on obscenity charges; the case later was dismissed.

After discovering that sadomasochism (“S&M”) and what then was called “rough sex” was a turn-on for him, Renslow became part of the era’s underground S&M network and leather/BDSM themes started appearing in the magazines published by Kris Studio. In 1960 Renslow was instrumental in opening Chicago’s first leather bar, the Gold Coast, as a gathering place for the emerging leather culture. The Gold Coast went through several iterations at different addresses before finally closing in 1988.

Over the years Renslow also was involved with many other businesses (including bars, restaurants, and bath houses) catering to the gay and leather communities in Chicago. Man’s Country, a gay bath house, opened in 1973 and is still in operation. (Many of these businesses suffered occasional police raids into the 1980s.) From 1981 to 1986 Renslow was the publisher of Gay Life, a newspaper for Chicago’s gay and lesbian community. He also had business interests at times in Kansas City, Phoenix, and New York City. Renslow and his family also hosted some memorable parties throughout the years including, starting in 1974, the legendary White Parties.

In 1972 the Gold Coast began presenting the annual “Mr. Gold Coast” contest. Over the years the crowd attending the contest grew too large to fit into the bar. In 1979 this led to the Mr. Gold Coast contest being transformed into the International Mr. Leather (IML) contest. A Leather Market was added in 1988 (with five vendors!) and the International Mr. Bootblack contest was added in 1993. For many years Renslow delivered a “State of the Community” address to the IML audience; however, he was unable to be present at the contest in 2017 and instead watched the contest at home via Skype.

In 1992 Renslow and Tony DeBlase, designer of the Leather Pride flag and one of the publishers of Drummer Magazine, co-founded the Leather Archives & Museum to preserve and display the history of the leather/BDSM/fetish communities. Many artifacts from Renslow’s various businesses are collected there, along with examples of artwork by Orejudos.

Although Renslow never held public office (he thought it would not be possible because of his leather connections), he was a lifelong Democrat and was for many years involved behind the scenes as a political activist working for the GLBT and leather communities. Renslow also was a lifelong seeker of spiritual enlightenment who appreciated the value of ritual and ceremony. As one expression of this he became a Master Mason.

Renslow received numerous awards and honors over the years including membership in the Chicago Gay and Lesbian Hall of Fame, a Lifetime Achievement Award from The Leather Journal, a Centurion Award as Leatherman of the Century, and a Leather Leadership Award from the National Gay and Lesbian Task Force.

To find out more about Renslow’s fascinating life and his many contributions to the leather/BDSM/fetish and GLBT communities, read Leatherman: The Legend of Chuck Renslow by Tracy Baim and Owen Keehnen, published in 2011 by Prairie Avenue Productions.