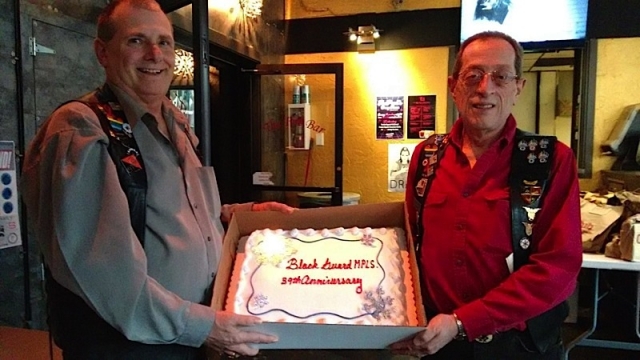 The Black Guard of Minneapolis, the second-oldest leather club in the Twin Cities, celebrated their 39th anniversary on Saturday evening, March 26, 2016, at The Saloon. Among the people attending the celebration were representatives of the Imperial Court of Minnesota and the North Star Gay Rodeo Association.

During the time the Black Guard has been in existence, other leather clubs have come and gone. Two examples: in the Twin Cities, Minnesota Storm Patrol disbanded in 2011; and in St. Louis, Gateway MC shut down in 2013 after 40 years of existence.

The Black Guard has not disbanded, but for some time their membership has been dwindling.

For many years the Black Guard raised large amounts of money for charity. Their annual Black Frost run attracted leatherfolk from all over the U.S. and even from Europe, and always featured a very entertaining and creative show. In 2000, the club’s show, presented at the Mall of America, was a production of the off-Broadway musical When Pigs Fly.

Club membership peaked in 1993, with 24 members. That was the year I started getting involved with the leather community, and I became friends with quite a few members of the Black Guard. Sadly, many of the people I met in 1993 are no longer with us.

With the recent passing of founding member Ralph Schmidt, the club is down to four full members, plus associate members and alumni. Aging, health problems, relocations, deaths from AIDS and other causes, and the rise of the internet all have played a part in the club’s membership decline.

Even many of the places the Guard congregated are no longer here. St. Paul’s Rumors/Innuendo bar, the site of the 2009 Black Frost show, was a victim of light-rail construction and closed in 2010. The Ramada Inn at 12th Street and First Ave., which the Black Guard used several times as a host hotel for their Black Frost run, is now a parking lot.

Holding another Black Frost run is out of the question at this point, but the club’s remaining members still travel together to runs held by other leather clubs. 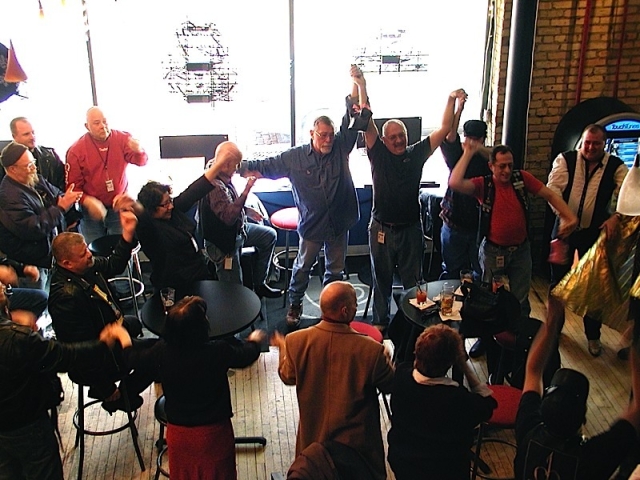 The Black Guard in earlier times: the close of the Black Frost run show in 2009, held at Rumors/Innuendo in St. Paul. Photo by Steve Lenius.

And the remaining members still take care of each other. During Schmidt’s final years he was taken care of in large part by his club brothers because, as Delorme told me, “That’s what brothers are for. If you don’t do that, you’re not really a brother.”

Might the club experience a revival? It wouldn’t be unheard of; the Knights of Leather, a Twin Cities club for leatherwomen that was founded in 1985, almost disappeared in the late 1990s before reinventing itself as a pansexual club that is now going strong.

For now, the Black Guard soldiers on. Delorme told me plans are being made for the commemoration of the Black Guard’s 40th anniversary next year. I expect I’ll be there.