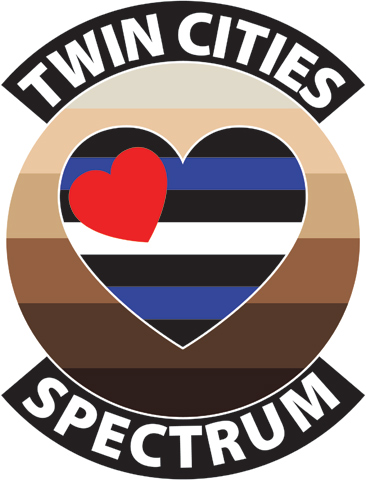 I recently participated in a virtual group interview with some of the members of Twin Cities Spectrum, “a club by people of color across the age, ability, sexual orientation, and gender identity spectrum, interested in leather and kink.” I thank them for answering my questions and sharing their views, as members of the BIPOC (black/indigenous/ people of color) community as well as the leather/BDSM/fetish community. (Interview has been edited and condensed.)

How should members of the leather/BDSM/fetish community respond to the killing of George Floyd at the hands of the police?

Ashley Scott: As a minority group seeing another minority being dismantled and oppressed, I personally think they should be outraged.

Danielle Nevels: I would say they should completely support the protests that are going on in response to the killing. Complete total public support. Also financial support, if they’re able to do so, to every group that’s trying to help the community.

Roxanne Anderson: I hope the larger community will begin to listen and believe people of color in a different way. I can’t even say how many organizations and individuals have reached out to me and said, “Oh, I remember what you were trying to tell us five or six years ago, and will you talk to us now?” People of color have been saying this same thing for a long time. Now that the larger world can see it, people need to respond. People need to support protesters. They need to believe what people of color are saying, and they need to put direct dollars towards supporting BIPOC-led initiatives doing work in (our) community.

Can you mention some of those organizations?

RA: In our own community, Rare Productions, Twin Cities Spectrum, People of Color Pride. Some of those organizations have been around for a long time, surviving on shoestring budgets, while other white-led organizations talk about the work they’re doing to undo racism without really supporting those entities or individuals. So I think now’s the time to be real about where folks are putting their dollars and who they’re supporting, and why.

What are anyone’s thoughts about the subsequent protests and how they relate to the leather/BDSM/fetish community?

Ivan Nunez: The level of protest, and even the tone of the protest, is not surprising because this is not just the obscenity, if you will, of the [killing of George Floyd]. It is the obscenity of 400 years of oppression of the black community. It is frustration…over the way the health system has abandoned communities of color, especially during this crisis, and over housing problems. It’s a lot of inaction all coming together with, you know, rubbing salt in a wound with a heinous act.

Sometimes in leather we forget that the nature of leather is in and of itself revolutionary. Within the spirit of leather, it makes complete sense to be not only vocal and active, but literally on the front lines of these protests.

Anna Meyer: A lot of the leaders on the front lines are queer, trans, two-spirit, black, indigenous, people of color. Those are the folks who have been doing organizing and activism for decades. Pride [Stonewall] was the first riot. And it started off with folks of color, trans folks of color.

How can the leather/BDSM/fetish community support you and its other members who are black, indigenous, or people of color?

AS: Showing up and showing out.

DN: Give us space to tell our stories.

RA: Learn the root causes of racism and white supremacy, and then find ways to authentically support those people of color around you.

AM: The Hennepin County Library System has some great e-books that talk about race, the construction of white supremacy, systemic racism, sexism, transphobia, all of those things. There are lots of resources out there that folks who are white or light-skinned or have white privilege should be reading and should be learning, if this is something that’s new to you. Educate yourself. Don’t rely on your, you know, one black friend to educate you on what’s going on.

IN: What I would like to see from this for the leather community is to really look at how we can make ourselves thrive and be better. Really looking at our practices as clubs— what are the rules that have kept some people out? Our contests, our events—how can they be more inclusive? Not everything has to be a big transformation. Every little thing that allows those that have not had a voice in the past, to have that voice, makes a difference.

(Part 2 of this interview will appear in the next issue of Lavender.)