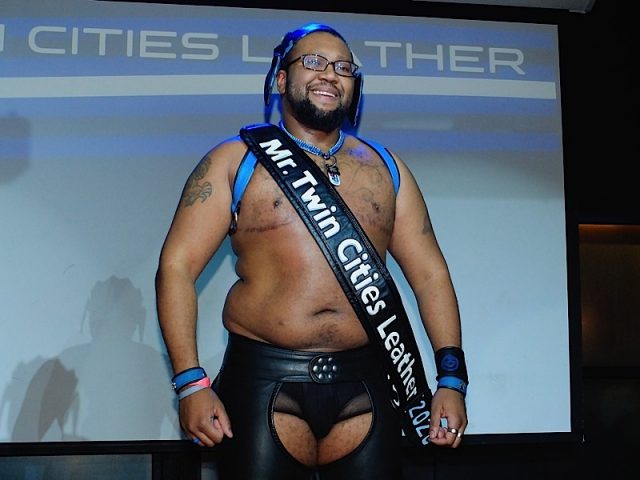 The weekend kicked off Friday evening with a Meet & Greet featuring the introduction of the weekend’s contestants and judges. This was followed by Tank, a leather and gear night that recreates and updates the Saloon’s Tank leatherspace of years ago. Also part of Friday evening’s activities was the Twin Cities Rubbermen’s monthly meet & greet, held in conjunction this month with the Twin Cities Leather Weekend.

Saturday afternoon’s many kink-education workshops were presented by Twin Cities T-Rexx and Twin Cities Sirens, along with Twin Cities Spectrum. Topics included rough body play; consent and relationships; learning to love your body through stripping; a panel discussion on the intersection of leather and kink; a rope social in the Saloon’s Fire Bar; and a pet mosh. Also on Saturday afternoon, a Community Health table staffed by the Red Door Clinic provided testing for HIV, syphilis and Hep C, plus education on harm reduction, Naloxone & overdose prevention, safety, sexual health and more.

Saturday evening’s contest was co-emceed by Karri Plowman and the exceedingly glamorous Slaymantha Fox. The evening opened with the traditional blessing by members of the Ladies of the Lakes/Sisters of Perpetual Indulgence.

The weekend’s three contestants for Mr. TCL 2020 had already been privately interviewed by the contest’s judges. During the Saturday evening portion of the contest they were judged on their speeches, talent presentation and response to an onstage question.

In the speech segment contestant #1, Brawny, reminded the audience of the importance of face-to-face communication, even in an era of social media. Contestant #2, Broadway Baby, talked of his gratitude for the leather/BDSM/fetish community and the importance of safe spaces for, as he put it, “misfit toys.” Contestant #3, Ash, spoke poetically of a lifetime of being put in boxes and categories where he doesn’t fit before concluding that we are all more than a box or a category.

In the contest’s talent segment, Brawny performed an old-school, old-guard, vintage leather-bar seduction scene—and he sang on the soundtrack accompanying the action. Broadway Baby’s performance incorporated elements of leather, age play and puppy play. Ash’s performance touched on themes of body and gender dysmorphia, HIV, and learning to love oneself. While Ash was performing onstage, he also appeared in a video that was projected behind him, and the Ash in the video spent a lot of time looking in a mirror. So it often looked as if there were three Ashes performing onstage.

The crowd at the contest was large and included many out-of-town guests. (Host hotel for the weekend was the DoubleTree Suites in downtown Minneapolis.) Part of the contest evening was the recognition of local and visiting clubs and titleholders, and in both instances the stage almost couldn’t hold them all.

The weekend’s events were planned to be as inclusive as possible for as many groups as possible. The entire weekend was open to those 18+, allowing those too young to drink to still enjoy the events and engage with the leather/BDSM/fetish community. Also, the Saturday evening contest was ASL-signed, and several Deaf people who were there told me they really appreciated the gesture of inclusion. 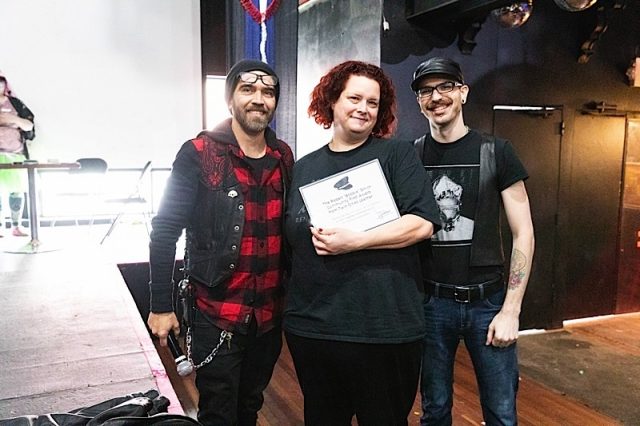 Sunday’s Victory Brunch, sponsored by Minnesota Leather Pride and catered by The Nicollet Diner, was followed by the presentation of the Bobbie Smith Community First Award. This year’s award recipient was Katherine, also known as HowMayIServe.

This year a new event followed the Victory Brunch: The Ladies of the Lakes/Sisters of Perpetual Indulgence presented a celebration of queer Mexican art and culture in the form of a game of Lotería (sort of like Bingo but with illustrated cards instead of numbered ping-pong balls).

From Friday’s Meet & Green to Sunday’s Lotería, the Twin Cities Leather Weekend proved that we may be “misfit toys,” but we know how to have fun.